At The Haven, Dunton Visitor Centre 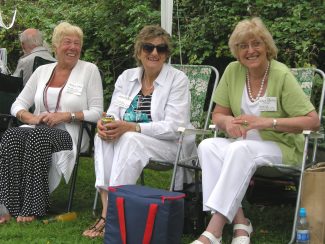 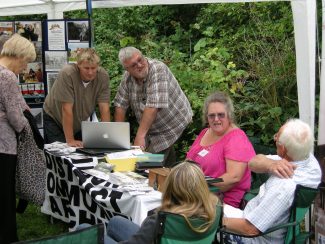 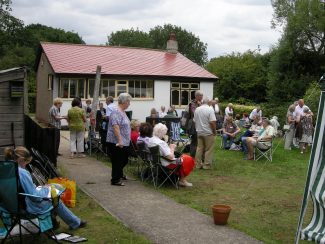 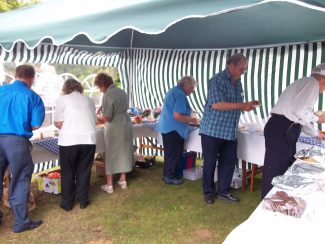 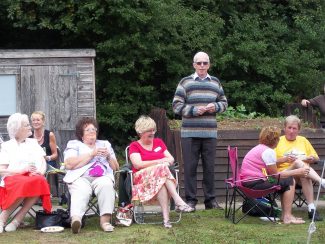 zoom
Joe Goodman - King of the One Liners
Colin Humphrey 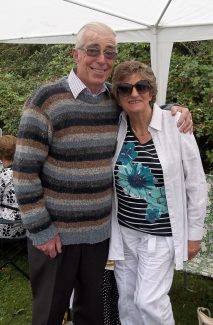 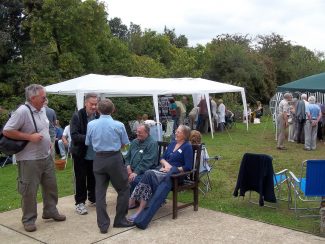 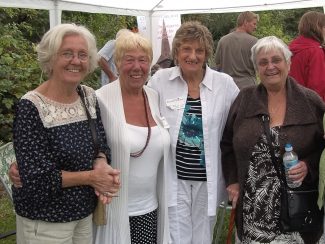 zoom
Sylvie and Anne with twins Una and Eira Richardson - together after approximately 50 years.
Colin Humphrey

The 10th Anniversary of the Dunton School re-union took place on Saturday 6th August 2011. The re-unions, organised by Audrey Carter, have been extended by popular demand to those who lived in the plotland areas of Laindon and Langdon Hills. I lived in a plotland bungalow called ‘Spion Kop’ in Alexandra Road, Laindon (part of the un-made section of King Edward Road) and therefore, decided to go along, not knowing quite what to expect and was rewarded with a well-organised thoroughly enjoyable afternoon.

My sister Anne Burton came along with her friend Sylvie Currington (nee Short), who had lived in a bungalow very close to us called ‘Artillery View’ off Devonshire Road, Laindon.

My husband, Colin, went along early to help erect the marquees in the back garden of The Haven. He then returned to collect us at 11:30, with the news that guests were already arriving. We arrived at 12 midday and were parking up, when a car arrived containing two of Anne and Sylvie’s school chums who were smiling and waving enthusiastically. They hugged each other and started chatting. I thought for a moment that this group of friends from many years ago were going to conduct their re-union quite happily in the car park, so I suggested that they follow us up to the Haven, while we led the way.

More guests arrived, set up their deckchairs, (some took contributions to the buffet marquee), greeted and chatted with other quests and eagerly viewed the photographs that had been pinned to a display board by Patsy and Ian Mott.  Sylvie took a tour inside the Haven (The Plotland Museum) as she hadn’t visited the Dunton Centre before.

My younger brother Alan Burton and his wife Hilary arrived and although they enjoyed the afternoon, looking at the photos, listening to stories and chatting, unfortunately there were no school chums or neighbours of our age group in attendance.  However, I can’t say the same for Anne and Sylvie.  Anne met several of her classmates.  Pam Whitehead, June Hall, Leonard Williams, Maureen Davey (nee Cordell), and Joe Goodman (formerly Cotterill) who had sat directly behind her in class at Laindon High Road School.

The buffet opened and as the guests (who were sitting almost in a circle) finished their picnic, Joe Goodman stood up and treated us to one of his famous ‘King of the one-liners’ sessions.  He threw joke after joke at us making it difficult to keep up with him.  In fact, when one chap suddenly laughed aloud on his own, Joe remarked ‘I see you’ve just got the first one’.  In fact, we all laughed so much, the lady sitting directly opposite me almost fell off her wobbly deckchair and Joe, never slow to sieze an opportunity, asked a bird that was singing very loudly in a nearby tree, if he was trying to join in the show. After Joe told his final joke of the afternoon, we were each treated to a most delicious slice of the 10th year anniversary iced fruitcake.

Joe’s performance had brought the gathering even more closely together and everyone started to mingle, reading name tags, asking questions and thoroughly enjoying each other’s company on a sunny afternoon which was interrupted only by a couple of very light rain showers.

At around 4:30 something most uncanny happened. Anne mentioned to Sylvie that she wondered whatever happened to the twins Una and Eira Richardson who they used to play with in Devonshire Road, Laindon. (The twins were the sisters of our older brother Dennis’s best friend Bobby Richardson, who himself had a twin sister Pam. Their mother had several children including the two sets of twins.) As Anne finished speaking, she turned to her right and Una and Eira were standing there. Anne was so totally gob smacked, it’s a wonder she didn’t swoon. Sylvie burst into tears and threw her arms around them. Colin grabbed the camera to capture an image of a re-union spanning approximately 50 years.

My first experience of Audrey’s re-unions was one of a joyous afternoon, in good company enjoying both tears and laughter and the date of next year’s re-union – 4th August 2012, was added to several diaries.

Many thanks to Audrey for all her hard work and wonderful organisation in producing the event.  To Ian and Patsy Mott for supplying the photograph display and for answering so many questions with their extensive knowledge. Not forgetting everybody who stayed on in the rain to help to dismantle and pack away the marquees at the end. Long may the re-unions continue.