You are here: HomenextAreas and PlacesnextLaindonnextA Tenth Birthday Party in Noak Hill Road 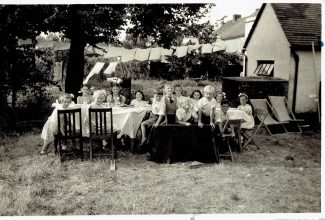 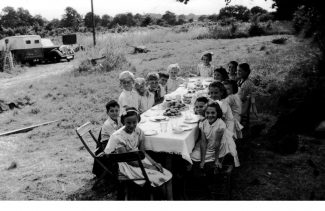 Two photographs provided by Vivienne Salmon (nèe Bragg) of her 10th birthday party in August 1956 which took place in the garden of ‘Pettistree’ in Noak Hill Road. Click on photo to enlarge the image.

Vivienne at the head of the table and then:- front from the right – Douglas Merchant, Howard Davies, Harry Bragg, Clifford (cousin from Sheffield), David Merchant, June Smith, Lorna Smith.

Second photo taken from a different angle.  Click on photo to enlarge the image.

Most of these children went to Markham’s Chase School, their mothers taking turns to walk with them on the long journey to and from.  Later on, when they were a little older, their journey was by bus.