Corporation claim we are blameless 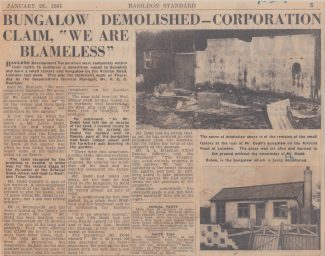 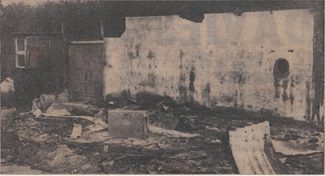 zoom
The scene of desolation above is of the remains of the small factory at the rear of Mr. Dodd's bungalow on the Arterial Road at Laindon. The place was set afire and burned to the ground without the knowledge of Mr. Dodd. 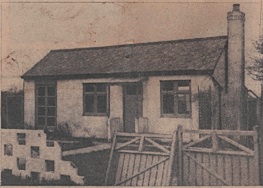 zoom
The bungalow which is being demolished.

Barry made mention of the following cutting from the Basildon Standard of January 28, 1961

BASILDON Development Corporation were completely within their rights to authorise a demolition squad to demolish and burn a small factory and bungalow on the Arterial Road, Laindon, last week. This was the statement made on Thursday by the Corporation’s General Manager Mr R C C Boniface.

Said Mr. Boniface, ” We were completely blameless. We acted perfectly properly in this matter. We have worked in close co-operation with the agents for the vendor and have done nothing which was not authorised by the agents.”

A row blew up when the owner of the factory and bungalow, a Mr. Leslie Dodd, turned up and found the premises being demolished. He maintained that the Corporation had no right to demolish his property and that the first he knew of the matter was when he was called there and found some of his furniture going up in flames.

The land occupied by the premises is needed  to make way for the second stage of the fly-under of the Arterial Road, which will lead to Basildon Town  Centre. Mr. Dodd himself is part of the mystery. A near-neighbour and friend of the family, who refused to give his name, said, “I know where Mr. Dodd is living now—but I am not telling anyone.”

He is 80-years-old and has been a friend of the family for many years. He said: “Mr. Dodd has been arguing with the Corporation for 15 months about the sale of his land and property. They were offering him £2,000 for it—-it is worth more than three times that.

“He told me negotiations were still proceeding, but meanwhile, he had moved into another house, leaving some of his possessions and his factory equipment on his Laindon premises.”

The man told, how, on Wednesday week, he was woken up by workmen who knocked on his door and said they had been sent to demolish the premises.

He continued, “As Mr. Dodd had left me in charge of the land, I rushed round to him. When he arrived he found his factory was  in flames, part of the bungalow had been ripped down and his furniture was burning in the garden.

“There were two armchairs, a coffee table, lino and curtains. Mr. Dodd was absolutely stunned. He ordered the workmen off his land and his solicitor contacted the Corporation.”

Mr. Dodd had taken ten years, all the time he had lived in the bungalow, to build up his machine-tool business. He owned almost an acre of land.

It is understood he has now moved to a place near Wickford and the neighbour said he is continuing his business there.

“It is an absolute scandal,” he said. “Mr. Dodd had not even finally agreed to the sale and it has cost him, besides the damage, a loss of £3,000 worth of business.

The mysterious Mr. Dodd himself ? He is 42 years old and described as an expert craftsman. He lived in the bungalow with his wife and a son aged 18.

Mr. Dodd told his friend that, as yet, he has received no compensation from the Corporation for either the value of the property or the damage.

Mr. A. L. Strachan (Chief Estates Officer) told the “Standard”: “The Corporation acted entirely properly in this matter. We had the authority of the owner through his agents, and had, in fact, been asked to take possession by the agents. We had settled terms for the purchase of the property.”

Someone, somewhere, has obviously made a slip. But both sides maintain they are in the right.