You are here: HomenextAreas and PlacesnextLaindonnextDenbigh Road by Andrea Ash 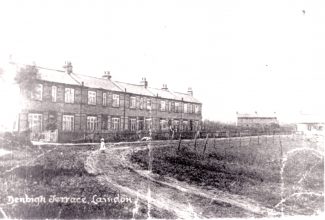 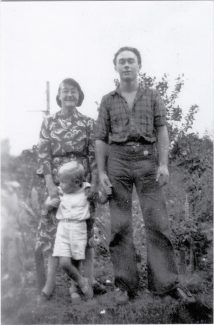 zoom
My mum and brothers in the back garden. The railway pole can be seen in the background.
Andrea Ash. 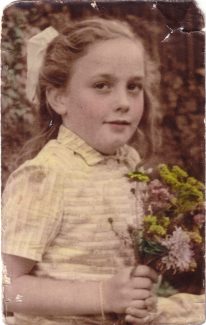 zoom
Me aged 7 at Langdon Hills Primary School. The photo was in black and white but was coloured in.
Andrea Ash 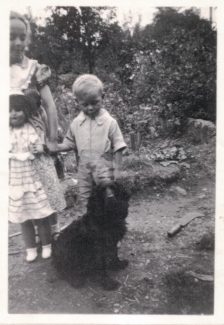 zoom
My brother Barry John, dog Bess and Leticia the doll which my big brother brought back from USA together with the dress I am wearing there (he was a Merchant Seaman). Also notice remains of air raid shelter on righthand side.
Andrea Ash. 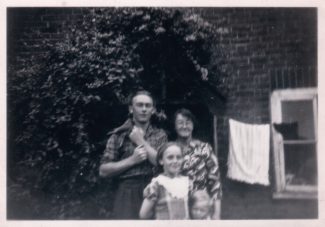 zoom
Mum, brother Ted (parrot on shoulder - he brought it back!) me and Barry.
Andrea Ash. 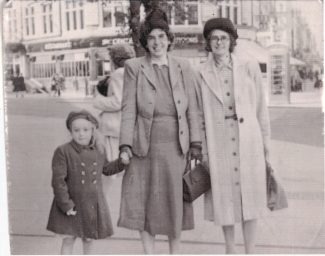 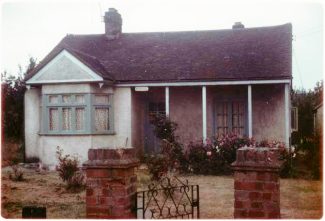 I was born in 1943 in Denbigh Road, Laindon (an unmade road) and left in 1952.  I enjoyed my childhood there, having a back garden with the railway track on the other side of the fence.  I used to stand on the fence and the train drivers would wave and toot as they passed (the house vibrated as they thundered by).   My oldest brother Ted worked as a porter at Laindon Station which was a short walk from our home.  In front of our house I remember a green painted street lamp which was lit by gas.  I recall it had a bar under the lantern which I and other local kids would swing from.

Mum worked in Greens Stores on the corner of Durham Road and she also cleaned for the Jeakins, Moss and Collings families, who were all related. Mum took in work from Wagner’s Cracker (Bon Bon) factory which was on the A127. Many a time neighbours came round to help out with making Christmas Crackers and paper hats. Paper, glue and boxes everywhere, but it was a good laugh. I can still remember the smell. My sister Connie worked at Rotary Hoes in West Horndon.

Our house was rented from a Mr Rawley. When older, it was my job to go and take the rent money to him. Mr Rawley scared the life out of me; a little thin, moustached, Dickensian type character, weasel-like, in a brown suit, topped with a brown trilby hat. His ‘office’ was opposite Churchill Johnsons, suspended over waste ground and I had to walk along a small wooden bridge held up by long poles to his little office at the end. I was always frightened of falling over the edge; it looked a long way down!

Our house had gas lights, an open range fire and a fireplace in one of the bedrooms.  In the scullery, we had a concrete-housed copper which had a space at the bottom to make a fire to heat water for our tin bath or for laundry.  The sink drain pipe protruded from the outside wall of the house with a bucket underneath it.  One night, someone sawed it off flush to the wall; it was made of lead, so it was valuable – well it was coming up to Christmas!  The outside toilet was situated away from the house in the back garden and had to be emptied into a hole dug at the top of the garden, out of the way, (at night we had potties under the bed!!).

Some winters the house would flood inside and as kids, I recall leaning over the settee floating paper boats along the living room floor and furry mould grew up the walls!  We later found out that we were living in a “condemned” house and also that the block of houses may have been built on a pond!

My parents had moved to Laindon from East Ham in 1926 and lived in various places around Laindon and Langdon Hills.  My dad was a carpenter by trade (a Journeyman) and helped to build several of the plotland bungalows in the Laindon area.

The Turner family lived in the big house up the road.   Mr Turner (Turners Coal Merchants) worked in the yard next door to our house, weighing the coal and coalite etc., and shovelling it into bags.  I remember the horses, a stroppy dapple grey and a beautiful brown horse called Lizzy.  I would go and see them in their stables and sometimes sit on their backs.  There was also an Airedale-type dog called Gussy who I perceived as being absolutely enormous.

Before I left Denbigh Road, the yard next door was bought by Snook the Stonemason but I still visited the yard; playing with the Snook children.  I marvelled at their dad’s works of art.

It was a good but quite basic life and neighbours were a big part of our lives.  Mr and Mrs Turner lived at the top of the road on the same side as Andrews post office.  Next was Markhams, then our family at No. 1.  No 2 – the Sargeant family, No. 3 was the Hymas family, No. 4 was Pastor West, his wife and family (Elim Pentecostal).  No. 5 I remember was Alf and Vi Cyster at the end of the block.

Next came the Chapmans, then the Lins, Mrs Lins being a money lender, a very busy place!  Next the Warners, then I remember the Hudsons, the Olivers, the Brockwells, the Clement family and Miss Le May who was a very old eccentric lady, her bungalow was the last. I ran errands for most of these people. With plenty of pennies in my hand!

Then there was wasteland that went into Durham Road.

I knew the Andrews boys and their mum and also the twins Mary and John Marchant who lived opposite in a flat above Barclays Bank. I believe their dad was a Bank Manager.

The other thing I remember about Denbigh Road was Presland’s Fair which would set up in the field opposite my home.  The Fair people were very friendly and I visited their caravans and watched them making humbugs from a hook on the wall.  I loved the fair especially the jungle ride!

The Cullum family lived in a bungalow near the other side of that field. Further up the road behind the Cullum’s, was the big house in which Turner’s the coal people lived. Later the Collings family came to live in that house – Collings the Laindon shop people, who are still around.

My parents took me to the Radion cinema many times; Saturday mornings I attended Kids Club and had a Roy Rogers badge! Sometimes local talent competitions were held there.

We walked for miles in any direction.  At Berry Lane, we helped out the trader Harry Slater when his family moved into a big house near the recreation ground.  The garden was a wilderness but we had a lot of fun.  Harry had a granddaughter called Penny, younger than me and I often wonder what became of her.

We’d often walk to visit our relatives who lived in Dunton; my dad and his brother had built their wooden bungalow called “Auriol” in Lower Avenue.  They had a pump in the kitchen which pulled water from the well in their garden.  As kids, we would lay over the top of the well and look down into it – no health and safety rules then!  Their garden was an orchard – a kid’s paradise.

During my time in Denbigh Road, there were several bungalows after the block of five houses and I knew every neighbour. However I am wondering if anyone can give me any more information about Denbigh Road?