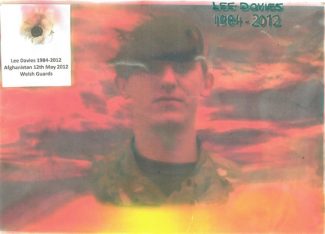 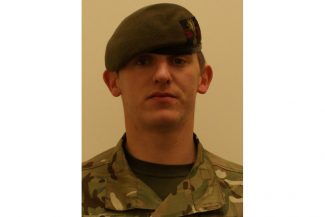 This poster of Lee Davies was attached last year to the Laindon War Memory around Remembrance Day (2014) and stayed there until removed just before this year’s Remembrance Day.

With the new developments taking place around the Borough Council with developers are considering naming some of the roads after our War Heroes. To date we have not been able to trace whether Lee had any connection to the area.

Lance Corporal Lee Thomas Davies was with the 1st Battalion Welsh Guards and had been deployed to Afghanistan on 21 March 2012 as part of a Police Advisory Team within the Police Mentoring and Advisory Group. He was based in the patrol Base Attal in the Lashkar Gah District of Helmand Province.

Along with Corporal Brent John McCarthy he was shot dead by an Afghan Policeman they were training on 12 May 2012.

So if anybody is aware of any family relations of Lee living in the area please get in touch.