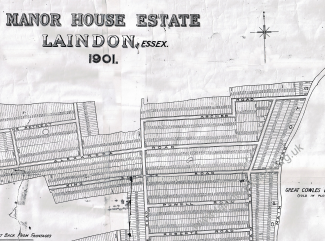 The original part of the King Edward Estate was built by Billericay UDC starting in 1946. Its layout was based on the 1901 Manor House Estate Plan as can be seen from the following:

The original plots that made up the Manor House Estate were 20ft wide by 120ft or more long. This was a common size for the plotland plots in the area and when setting up home in the area families would purchase one, two or more plots.

The following photograph was taken from the High Road looking up King Edward Road. The Friths caption says it was taken in circa 1960, looking at the new clean concrete fence posts it is thought early to mid 1950’s.