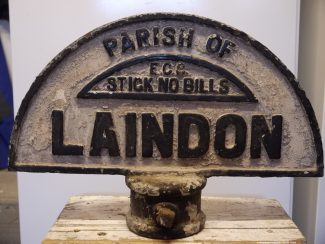 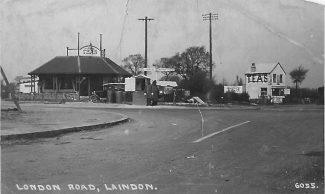 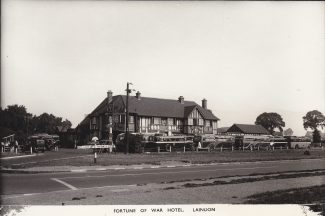 The Basildon Borough Heritage and Museum Group (BBHMG) have acquired the Dome of the Old Laindon sign post that was situated near the New Fortune of War Hotel, Arterial Road (A127).

It would appear that it first stood on the green verge in front of the Hotel during the late 1920s and later in the centre of the roundabout when the Arterial was duelled, mid 1930s.

The dome has been kindly loaned to the BBHMG by Paul Magner and his wife PAT (nee Kerr) who moved into a house in Laindon North in 1989. The only things that were left behind by the previous owners were a bottle of Champagne and the Dome.

Although, Paul is a little emotional about letting it go he feels it is time that the public get a chance to see some of Laindon’s heritage. The BBHMG and the Laindon Archive Group will display it on occasions when they hold their photographic displays depicting Laindon and District.

If anybody can remember the old sign and have photographs of it we will be pleased to hear from you.