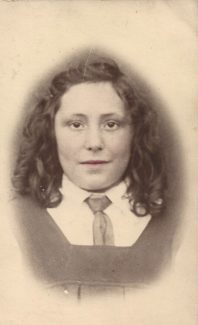 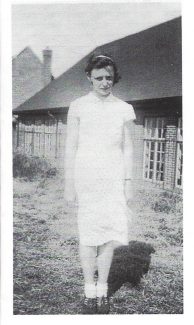 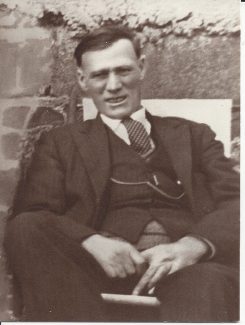 My family, (mum Nellie, dad William, sister Hilda and me Dorothy/Doris/Dolly Harber – we had bright red/ginger hair), moved from Dagenham to Laindon in 1925 when I was three years old.

We rented a house in Dickens Drive and for a short period, Uncle John and Ginny (Gibson) stayed with us (just after they were married). Mum had to walk me and my sister to Laindon High Road School and we went across fields and ditches as she did not know any other way of getting there. From here we moved to a property in St Nicholas Lane and it was there I remember seeing the R101 fly over.

The estate agent at the time, Mr Cass told my dad they were going to build new bungalows in Sandringham Road, these became known as the seven sisters and we later moved to number one. Dad named it Pretoria as he had fond memories of the people of South Africa from his war time experience. This property was nearer the station for dad to be able to get to work for the GPO and we were able to use the roads to get to school. All the bungalows had names, James Day lived at number 7, St Denis (where he was wounded in the war I think). The surnames of the occupants of the 7 sisters bungalows when I was there were:- Harber, Davis, Perry, Smith, Wilkinson, Roy ?? Day.

Milk was delivered twice a day by Mr Sloper with his horse and cart (there were no fridges!) and we had daily bread deliveries from Mr Pigg. All our other groceries came from Spires down the road, the last shop before the station bridge. I remember the ad painted on the gable end – ‘The best breakfast is bacon and eggs and the best bacon and eggs is Spires’

When the Radian cinema opened on the corner of the High Road and New Century Road, we were given the afternoon off school and we all went to see ‘Africa Speaks’ (a documentary about the wildlife in Africa) along with a bag of treats (sweets I think) and we were presented with a book afterwards.

I won a scholarship to Brentwood County High School when I was 10 (1932) and so left the High Road School and had daily bus journeys with pick ups at Dunton halfway house then Ingatestone before arriving at Brentwood.  There were only 2 private buses a day, so no out of school activities. I remember an older girl who got the same bus, Majory Wise.

My sister Hilda was made head girl of Laindon High in 1935 and I remember this entailed a new dress, a hairdo and making a speech – and photo.

I read with interest the article on Dr Chowdhary on this site, I remember him well attending us for the usual childhood ailments. There was a charge for calling out the doctor of 2/6 but it was 7/6 on a Sunday. My dad suffered from bronchitis and was eventually unable to continue working for the GPO and as he needed an income, Dr Chowdhary offered him a post as Chauffeur driving his lovely Daimler. Dad only did this for a short while, the doctor had recommended sea air for his bronchitis and so when Basildon New Town was being developed, we sold the bungalow and moved to Westcliff-on-Sea.