It is your opportunity to have your say as to where it should be relocated. 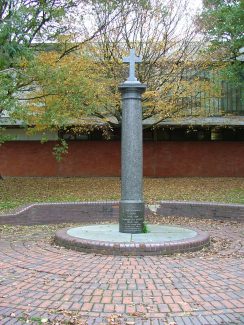 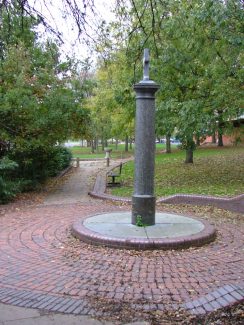 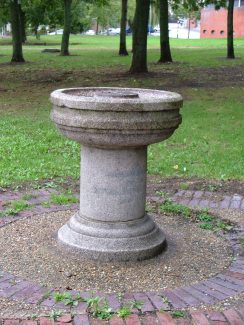 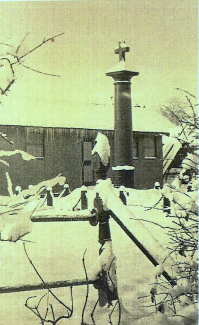 The Laindon and District War Memorial currently stands in front of the Laindon Shopping Centre, prior to that it stood in front of the British Legion Hall facing the High Road. The hall itself was built in the early 1920’s and had stood next to Laindon High Road School until it was sold and finally demolished in 1975. The memorial then languished in a store house near Pitsea tip, until it was rescued and relocated to its current position.

The War Memorial was unveiled on Saturday afternoon the 19th September 1935 , the following is the report from the local paper: –

“On Saturday the memorial to those who fell in the Great War was unveiled. It is a simple column of blue pear Aberdeen granite, surmounted by a cross of the same stone and stands outside the hall of the British Legion in the High Road. It is the gift of Mr A.E. Symes, of Brentwood and Stratford . Twenty branches of the British Legion from different parts of Essex were represented at the unveiling, each with its standard. The ceremony was to have been performed by Mrs Symes but she was called away to a daughter who had been taken ill and Mrs J McLachlan, another daughter, took her place. The gathering sang “O God, our help in ages past”, and there was a Scripture reading by Mr J. Tourie. Mrs Mclachan, releasing the Union flag that veiled the column, said: “To the memory of the Glorious Dead I unveil this memorial.”  All the standard bearers dipped their flags until after the dedication by the Rector of Laindon (the Rev. M.N.Lake) chaplain to the branch. Prayers were offered by the Rev. T.W. Shepherd, of the Langdon Hills Baptist Church and “The Supreme Sacrifice” was sung.

Buglers from Warley Barracks sounded the “Last Post” and after two minutes’ silence, the “Reveille.” Capt. F Cornish said although some people might remark upon the memorial being unveiled at such a late hour, he, personally, could think of no more fitting or opportune moment. but The memorial did not belong to the Legion but to everybody in the district. Mrs Mclachlan laid a wreath on the memorial and there were wreaths from the women’s section and a number of private ones. Visitors were entertained at tea by the branch and at night the memorial was floodlit”.

The memorial is inscribed commemorating both the two world wars:

It is non-denominational and there are no individual names inscribed.

The Laindon service is unusual in that, unlike others, it is always held in the afternoon of Remembrance Sunday, a tradition believed to have started when the war memorial was first installed because the local Rector of Laindon-cum-Basildon Rev. M. N. Lake had a morning service to run.

Prior to this memorial the only remembrance of those fallen in the Great War was the ‘Garden of Roses’ on the junction of St Nicholas Lane and Basildon Drive and the Memorial Hall built by voluntary labour. It stood more or less where the Laindon Community Centre is to day until it was demolished in 1967.

The original British Legion Hall was built in the early 1920s and stood facing the High Road next to Laindon High Road School until it was sold and demolished in 1975. The current hall is at the Triangle centre in Langdon Hills. One or two of its members are petitioning the council to let them remove the memorial to the Triangle centre.

So many Laindon landmarks have now disappeared, so if Laindon is to retain its identity in the larger Basildon, it must fight to save what little is left. The War Memorial is one; the other is the King George V and Queen Mary 1935 Royal Silver Jubilee Water fountain that currently stands nearby. Previously this had stood next to the junction of the High Road and St Nicholas Lane called Hiawatha corner opposite the doctor’s house by the same name ‘Hiawatha’. I understand that it was the children of Laindon who decided on the Silver Jubilee fountain instead of a party.

If you want the memorial to stay in Laindon let your councillors know, you have until September 2011.