You are here: HomenextAreas and PlacesnextLaindonnextMain Post Offices of Laindon

Standing outside the shop on a suitable day, with the wind in the North West quarter, it might be possible to spit on Laindon Station to justify any claims that the Andrew's shop was in spitting distance of the railway. 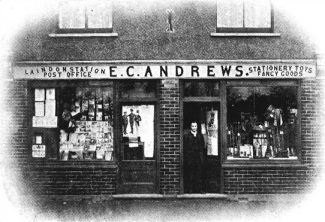 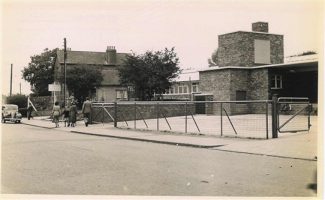 The name above the door of this shop, “Laindon Station PO” is a reasonable description of its position in Laindon High Road. Standing outside the shop on a suitable day, with the wind in the North West quarter, it might be possible to spit on Laindon Station to justify any claims that the Andrew’s shop was in spitting distance of the railway.It certainly qualified as Laindon’s Post Office right up until the time a purpose built branch replaced it in 1954 or 6 on a vacant site that had never, ever been developed on the other side of the High Road, immediately opposite the “Laindon Hotel”. The original post office illustrated in the photograph stood on the North corner of the Denbigh Road / High Road junction.

It is not clear if the name on the facade is that of Mrs. Ethel Andrews or of the gentleman pictured standing in the doorway. Certainly, Mrs. Andrews ran the shop and her prowess with the franking device as she canceled the postage stamps on the letters that had been collected from the post box to the left of the shop’s front door was something to behold.

The GR on the box dates the PO’s franchise to no earlier than May 1911 and at the time of photograph it was still possible to buy stamps in strips one penny at a time from the adjacent machine.

At the rear of the shop was a large barn like shed accessed from Denbigh Road that served as a sorting office. From here, all Laindon’s postmen set out with their distinctive red bicycles to deliver around the districts of Laindon, Langdon Hills, Lee Chapel and Dunton. Basildon, then had its own arrangements.

Although there were a number of other sub-post offices in the district, all mail in and out passed through this sorting office. I believe this building also served as the local telegraph office, in which case, telegraph messenger “boys” would also depart from here. (This is something that needs verification)

On the pavement’s edge in front of the Andrew’s shop stood one of the few public telephone boxes of the area. It was one of the less sophisticated equipped boxes of its type in that had only one button (A) available to press. The most sophisticated boxes had two, A and B, accompanied by a Strowger dialing mechanism which meant that local calls could be made by inserting two pennies and ringing somebody direct and not have to wait for the operator to answer. Without this facility, Laindon’s telephone system was cumbersome and, as a result, a lot of people found it rather frightening. Potential users had to approach the box more often than not, armed with a fair amount of small change, particularly if the call involved any considerable distance like calling a London number (all of 25 miles distance). Every call had to be directed through the operator who would only let it proceed further once contact had been made with the recipient and then only after the cost had been calculated and the necessary fee paid. The whole process could be an irritant to those who had the advantage of the best, up to date, system of telephonic communication.