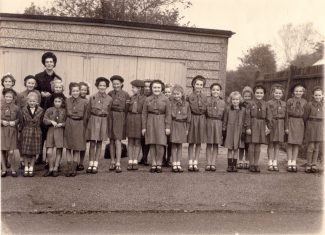 Georgina Nottage (née Ellingford) has kindly supplied this photograph of the Brownie Pack that used to meet at St Peter’s Hall.  The pack is standing outside Dr Long’s garage and the photo is estimated to have been taken approximately 1953/54.  Unfortunately Georgina cannot remember the name of the pack but some of the Brownies have been identified.

First left, (at the back) – Janet Pope.  Seventh from left – Carol Bailey.  Eighth from left – Jessie Hernandez with Jo Bowen to her right.  At the back between Carol and Jessie – Andrea Bardot (with white bow in her hair).

It is known that the Pack Leader had two sons and was the wife of a Policeman who lived in the police houses in Victoria Road.  Therefore she could possibly be Joan Reid, wife of policeman George Reid whose sons were Malcolm and Alistair.

Any further information or identifications would be appreciated.