In the News once Again: the Meadows North of Dry Street (Otherwise known as the Dry Street Meadows) 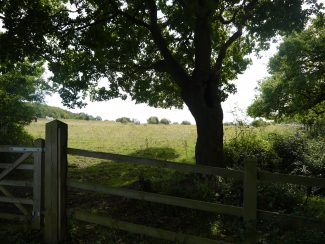 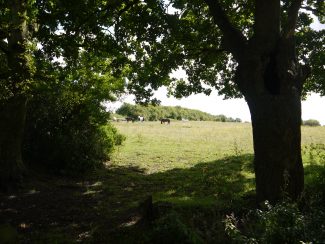 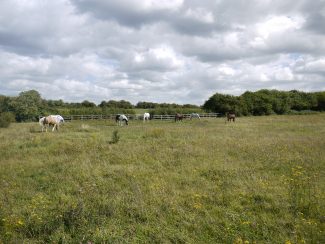 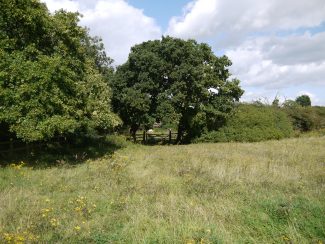 For the uninitiated, these are the meadows which extend westwards from Basildon Hospital and Basildon College, reaching as far as the bridleway, which constitutes the eastern boundary of the EWT’s Langdon Nature Reserve. They lie to the north of Dry Street – hence the name – but are not really visible from that road, given the development already in existence, and the frontage of Longwood Riding Stables, which are currently an integral part of the site.

However, don’t be fooled by the seeming invisibility of the meadows in question. They can be viewed if one looks eastwards from the bridleway, where the vista towards Hawkesbury Bush and the Big Hill is such that one could be forgiven for thinking that one is many miles from any serious urban development. That is a prospect which is beautiful enough – but take my word for it, the view looking westwards across those same meadows, towards the Langdon Hills ridge, as seen from behind the hospital, is quite one of the most sublimely beautiful prospects to be had for several miles around Basildon. It is all the more delightful given that it is so very close to the town, yet it is unfamiliar to the vast majority of folk for the simple reason that there is no public access to that spot.

Indeed, there is a case for somehow incorporating that view into the overall network of public paths in the neighbourhood of the town: an infinitely more appropriate course of action than the one which has lately been resuscitated – the idea of building a large number of homes and commercial enterprises thereupon.

This is a rerun, in a modified form, of the proposal which met such fierce opposition a mere five to six years ago, when the plan was to build 1300 homes on the meadows, with access to come primarily from the hospital roundabout (already a scene of hideous congestion for too much of the day) and somewhat from Dry Street. On that occasion, the plan was seen off, thanks to the concerted opposition.

The land is publically-owned. It came into public ownership in the days of the Basildon Development Corporation, and subsequently transferred to the New Towns Commission when the BDC was wound up. Since then it has resided under the authority of successive government quangos – English Partnerships (as of the last big proposal to develop it, six years ago), and currently the Homes and Communities Agency (HCA).

The latest scheme was announced earlier this year, under a glorious smokescreen. The emphasis was not upon the number of homes and commercial establishments which are being contemplated, but rather upon a seemingly exciting proposal to build a new college in Basildon, close to the town centre. The message conveyed is that somehow the existing college buildings are not fit for purpose, despite having been built as part of the new town, and that it would be desirable to relocate the college onto a new and rather more cramped site in the town centre – and this has been presented as a profound improvement in the educational provision for the town.

Implicitly, the considerable amount of land which the college currently occupies would thus be released, to be added to an as yet undefined amount of land on the Dry Street Meadows. Thus combined, the lands would be developed for commercial and housing purposes, accessed via that same congested hospital roundabout.

The Dry Street Meadows are not located within the Green Belt – despite the various utterances by political figures in the past, who have indicated the desirability of placing it within that belt. However, most of the meadows are located within a County Wildlife Site (Ba24 Dry Street Pastures). They constitute long-established meadows, of the kind that have disappeared to such an alarming extent in the years since World War II: over 97% of the traditional meadows that existed after that war have been lost. They support a wide range of wildlife, some of it now scarce, to the degree of being of Red Data Book and BAP status. Under their current management as pastures and hay meadows they continue to thrive, and moreover, as indicated above, they constitute a rare scenic asset to the town and the region.

It is the Society’s contention that they form part of the precious Langdon Hills ridge, which should be visualised as a feature of regional landscape and ecological significance, too valuable to be eroded piecemeal in the name of urban development. Indeed, the vision of the town’s Development Corporation was an inspired one, inasmuch as the meadows in question were allocated to a purpose-built equestrian centre which provides a valuable recreational facility for the town, while simultaneously forming a subtle and effective interface between town and country. Moreover, they border onto the Langdon Nature Reserve – one of the most substantial and important reserves in the entire county.  This reserve in turn is an enormous asset to both Basildon and the other neighbouring communities. As traditional pastures, the meadows complement the nature reserve which they border onto; in a manner that would be impossible were they to disappear under a major housing estate.

For the reasons given above, the Basildon Natural History Society is very sceptical about the latest proposal, and opposed to the violation of the County Wildlife Site.