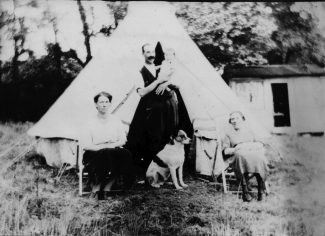 My father, Percy Neville, born 1891, came from Wickford.  He joined the Metropolitan Police and moved to Bow when he was stationed at Bow Road.  He met my mother, Ethel Muir in 1914, and they married in 1919.

In 1924 they used all their savings (+£10) to buy a four acre field off Old Hill Avenue in Langdon Hills for a retreat as my father felt the need of quiet a place away from his job with people (land sold in plots consisting of two, four or six acres with some smaller strips later became known as “plotlands”).  The field had a small hut on it, equipped with two beds, a drop down table and two camp beds (concertina style, used as stools when folded).  Cooking was done on a “Beatrice” paraffin stove, washing, using a bowl and jug.  Water was fetched from a pond, which was a diagonal walk across the field, through two hunter’s gates, along a footpath by the ditch fed from a spring in the pine woods.  The full buckets had to be carried back – uphill.   The two hunter’s gates at the eastern edge of the field were to allow passage for the Essex hunt to travel from Coombe Wood to the Old Hall.  Sanitation was an earth closet, the contents buried in a fallow piece of ground at the end of the day.

My sister Winnie was born in 1925 and I in 1927.  The whole family came out from London by train one weekend in three in the summer and one in six in the winter.  My mother brought us as babies in the pram and walked up and over the hill to Old Hill Avenue and on to the field.  By 1934 my father had built a brick bungalow and water came from a standpipe 300 yards down the hill in the Avenue.  Water was finally connected into the bungalow in 1967 when plastic pipes brought the cost down to £1,000 (copper piping previously used would have cost £10,000).

Friends were made on the weekend train journeys as the same people came out loaded with things for their country home, and there was a good co-operative spirit, helping with jobs and some were neighbours from London anyway.

Footpaths and roads had been made, vegetables were grown – traps were used to protect the plants from rabbits (another crop!). A few people lived there permanently, some travelling to work or working locally, others retired and others “in hiding” from who knows what?  These residents would empty the rabbit traps in the week.

Chas. Sewell, sweep, had a sideline in selling sweets to the children – I remember sitting on his step to choose.  He also kept bees.  He had an observation hive in a bedroom so we could watch the bees flying in and out where he had replaced a brick with a tunnel.

In 1940, Winnie and I were evacuated with our school to Taunton.  In October, my father and mother came for a visit: my mother was going to stay on for a holiday.  My father returned to London for work to find our house had been destroyed by a bomb.  Mother stayed on in Taunton, father lived at the Police Section House in Bow.  He went out to “Kilima Banda”, (Swahili for Hill Hut) our bungalow in Langdon Hills one day in 1942 and found notices from the War Agricultural Committee saying the land was to be taken over for growing food, and the bungalow requisitioned for emergency housing: so he moved us all out to Langdon Hills and I, now fifteen years old, continued my schooling at Palmer’s College, Palmer’s School for girls (paid for by London).  I was therefore known as “an isolated evacuee”.  Other owners who did not come and find the notices lost their property and land.  After the war, permanent owners got their land back but absent owners were compulsory purchased and were paid the original price they had bought the land for.  It was all bought by one farmer.

This body was set up to find land that could be put to use growing crops when the U boats were preventing imports from abroad.  They found the plotlands off Old Hill Avenue, with their weekend huts, and posted notices declaring their requisition if the owners were absent.  Most of them were away in the war so the fields were ploughed right up to the buildings to prevent access and footpaths and roads disappeared.  The smaller huts and sheds were dragged away and if they broke in the process they were burnt.  Fences, trees and hedges were removed to create one 22 acre field.  Potatoes, corn, peas and beans were grown in rotation.  Any permanent residents were allowed to glean and the felled trees supplied firewood.

Father had moved us out to the bungalow to save it from being taken, but initially our path to the standpipe and along Old Hill Avenue had been ploughed.  Thanks to Mr Brooks JP who lived in “Goldsmiths”, we initially collected water from his house, while he put pressure on the authority to restore the rights of way, and to allow us 1 ½ acres for our own food.  We had wood for ten years from the felled trees; potatoes came from gleaning and gleaned corn fed the chickens.  We had goats, for keeping the grass and weeds down.

Father came home to live.  We started using the goats for milk.  Surplus kids were sold, billies went to a slaughterhouse at Horndon on the Hill and nannies to Wickford market.

There were 22 permanent residences and the spirit of neighbourliness meant we could hang a bag with an order and money on a gate for Piggs, the Sockett Heath grocers, to collect and supply our order on their three weekly calls to the area.  We also walked to Horndon for shopping and got the bus back.  We took our accumulators (for the wireless) to South Hill Garage once a week to be changed.    Our goats provided milk. Water came from the standpipe until 1967.  Father took the front seat out of the car so we could fill a milk churn with water and transport it to the bungalow.

The refuse vans didn’t come up the road; instead there were three bins at the end of Old Hill Avenue near the South Hill garage, but having fires, a lot of rubbish was burnt or buried.  Electricity was connected in 1964.