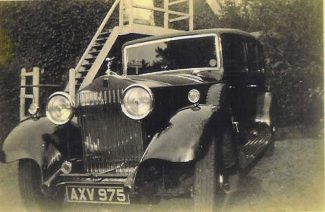 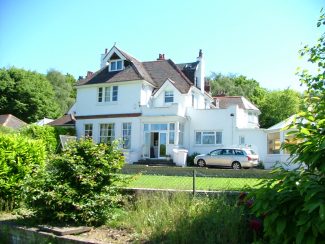 In chapter one of the Brooks family we stated that son Douglas was in the RAF during the First World War. His full name was Douglas Charles Morris and yes, he was in the Royal Flying Corps (RFC) but he seems to have taken an unusual route to get there.

He was born in Grays around 1897, the 1911 census has him boarding at Bootham School, York, a school that maintained a strong Quaker ethos. Our next record finds that on 31 March 1915 he has joined the Red Cross, Friends Ambulance Unit (F.A.U.) as an orderly and spends two years with the unit, terminating on 7 March 1917. His permanent address given is Goldsmiths, Langdon Hills. Individuals who took this course of action were normally referred to as V.A.Ds. (Voluntary Aid Detachments).

It has been difficult to establish when he joined the RFC but at some point he enrolled at Kings College, Cambridge and the record shows that he was an Aeroplane Officer.

He appears to have been promoted several times, Acting 2nd Lieutenant, Acting Captain etc. His son Anthony Morris Brooks’ obituary tells us that Douglas had undertaken secret missions during the First World War and there is no doubt that one of these missions resulted in him receiving the Military Cross. The following citation appeared in the London Gazette on 21 June 1918.

T/2nd Lt Douglas Charles Morris Brooks, R.F.C. – For conspicuous gallantry and devotion to duty. During the recent operations he succeeded, despite the most adverse climatic conditions, in completing a long-distance reconnaissance over the enemy’s lines, returning with the most valuable and important information. Previous to this he had brought down completely out of control one hostile machine. He has displayed great gallantry and determination and has rendered services of great value.

In the later stages of the war he was also awarded the Air Force Cross (A.F.C). This was an award that was given for an act or acts of valour, courage or devotion to duty whilst flying, though not in active operations against the enemy.

The possible reason for him initially joining the Red Cross is because his elder brother Alfred Basil had joined on 23 December 1914, again at the time living at Goldsmiths. Alfred was two years older than Douglas and the 1911 census has him with his brother at Bootham School, York. He joined the same unit (F.A.U.) but it would appear that his rank was that of a chauffeur and his area of operations was Dunkirk and his unit was S.S. U.13. The following is an abstract from British Red Cross web site:

The relationship between the Red Cross commission in France and the Friends Ambulance Unit (F.A.U.) was very close. From the early days the Friends were largely dependent on the British Red Cross and the Order of St John for vehicles to supplement the small fleet provided by members of the Unit, and when in the summer of 1915 it was decided to withdraw the small Red Cross Branch which had been established at Dunkirk for work with the French, several of the ambulances and lorries attached to that Branch were handed over to the Friends Ambulance Unit.

The work of the Unit at that time consisted principally in Civilian Relief but the addition 7 of 5 ambulances provided by the Joint Committee enabled it to provide two ambulance convoys, S.S.A. 13 and S.S.A 14 for service with the French Army. These two convoys were employed on front-line work at the extreme north end of the line and as there were considerable movements of French wounded in Dunkirk, a third Unit, which was called the ‘FAU Groupement’ was established to deal with this work.

This as you can imagine was extremely hazardous work – just as dangerous as being in a fighting unit and for his devotion to duty he was awarded by the French the ‘Croix de Guerre’. He terminated his involvement with the Red Cross on 7 March 1919.

The Croix de Guerre (English translation: Cross of War) is a military decoration of France. It was first created in 1915 and consists of a square-cross medal on two crossed swords, hanging from a ribbon with various degree pins. The decoration was awarded during World War I, again in World War II, and in other conflicts. The Croix de Guerre was also commonly bestowed on foreign military forces allied to France.

The Croix de Guerre may either be awarded as an individual or unit award to those soldiers who distinguish themselves by acts of heroism involving combat with the enemy. The medal is awarded to those who have been “mentioned in dispatches“, meaning a heroic deed or deeds were performed meriting a citation from an individual’s headquarters’ unit.