'The finest prospect: in all England'

Today the following may seem to be rather an overstatement but this is what Arthur Young in his book ‘Six Week’s Tour in the Southern Counties’ (1767) had to say when he stood on its summit:

“One of the most astonishing prospects to behold breaks out almost at one upon leaving one of the dark lanes. Such a prodigious valley, everywhere painted with the finest verdure and intersected with numerous hedges and woods, appears beneath you, that it is past description; the Thames winding through it, full of ships and bounded by the hills of Kent. Nothing can exceed it except that which Hannibal exhibited to his disconsolate troops, when he bade them behold the glories of the Italian plains! If ever a turnpike road should lead through the country, I beg you will go and view this enchanting scene, though a journey of forty miles be necessary to view it. I never beheld anything like it in the West of England – that region of landscapes!” Since the writing of this, a road has been made from Chelmsford towards Gravesend , passing by this hill; it was twenty-one years in turnpike trust, but is now free.”

It would appear that this road was desperately needed because this is what Young had to say a few paragraphs earlier:

“Of all the cursed roads that ever disgraced this kingdom in the very ages of barbarism, none ever equalled that from Billericay to the ‘Kings Head’ at Tilbury. It is for twelve miles so narrow that a mouse cannot pass by any wagon,….the ruts are of an incredible depth except at a few places and to add to all the infamous circumstances which occur to plague a traveller, I must not forget eternally meeting with chalk wagons, themselves frequently stuck fast until a collection of them are in the same situation, so that twenty or thirty horses may be tacked to each to draw them out, one by one.” 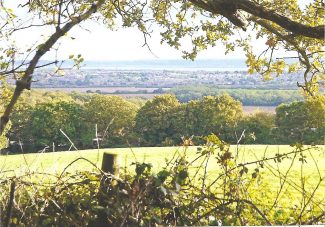 Photograph from the Southern Slopes of Langdon Hills, with the Thames in the distance. Ken Porter – October 2010.

Some fifty years later Daniel Defoe in his published account of a journey he made in East Anglia made reference to men from the marshes going up into the hills to find healthy young lasses to be their wives. Unfortunately they would soon succumb to the harsh conditions of the marsh lands so the men would ‘go to the uplands again and fetch another’. It is said that these marsh men had several wives. If Defoe’s theory is correct, the most likely ‘upland’ parishes for the men of the marshes to go to for brides would have been Langdon Hills and Laindon. However, the parish records do not support this claim, it must mean the men of the marshes were just fantasizing. However it does mean that they thought the hills were a much healthier environment to live in.

“ Fete Champetre” held on “one of the finest days the season has afforded”  when a large and elegant party from Hornchurch and its vicinity, Upminster and North Ockendon, assembled on Langdon Hills for the purpose of viewing from thence one of the most extensive prospects which this county affords”

“After admiring the view and the Thames crowded with stately shipping, the company were summoned by the sound of a cheerful bugle admirably played by one of the gentlemen and sat down under a friendly oak to a cold collation, to which each had contributed his share”.

“After the meal the ladies dispersed in straggling parties over the hill, their forms contrasting with the wild and sylvan (woodland) scenery contributing not a little to its beauty, while the gentlemen, who were less energetic, enjoyed various sorts of excellent wine. An elegant marquee had been put up for the occasion”.

The report closed with the following: “But now Phoebus gently withdrew his effulgent rays and by his decline warned the party to separate. They still lingered, however, till the shadows of evening closed the charming scene”.

The friendly Oak was possibly the one that Susanna Hatton, owner of ‘Goldsmiths’, had an engraving made of in 1832, and which appears in ‘The History of the County of Essex’ by Thomas Wright of Trinity College, Cambridge, 1832.

This Oak still survives in the area of the wood known as the ‘Park’. Unfortunately it is surrounded by hundreds of ugly conifers planted after the Second World War. 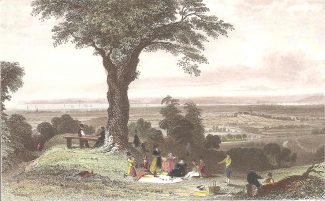 Every November/December the Old Oak Tree gets dressed by either the local schools or Brownie packs.

Later we have J.J Hissey in his book ‘A Tour in a Phaeton’ (carriage) 1889, telling us of the hospitality he received at the Crown Hotel.

“Reaching the top of Langdon Hills we came upon a homely little hostel; here we obtained a modest meal and a welcome rest but though modest our repast, it was served nicely upon a scrupulously clean cloth, the ale was cool and clear and the charge for two of us gave change from half-a-crown and marvellous to say, the civil waitress (not charged for in the bill) did not loiter about—as is the usual wont of her kind—to be remembered, though she did not lose thereby”.

Then just as he was going to leave the landlady gave them the opportunity to go to the top of the house and look at the view. They were amazed at the spectacular view as they looked down upon a glorious expanse of waving woods, green meadows etc etc…..

The top of the Hotel was going to be used as a look-out if Napoleon had invaded. 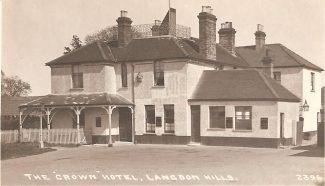 The top of the Hotel was going to be used as a look-out if Napoleon had invaded.

Approximately ten years later we have R A Beckett taking a walking tour around Essex and like the previous explorers he finds himself also amazed at a view he describes as quite unrivalled in England . He also describes the people living in the hills near Laindon ‘as still being very primitive’. His book ‘Romantic Essex’ is a must for those interested in Essex .

Finally there is an old rhyme that runs:

“As I stand on Langdon Hills

I can see Corringham and Fobbings Mills,

The views today are still spectacular even though you might not be able to see the tall white sails of the many ships that sailed up the Thames . I am not going to describe the views for you but suggest, like Arthur Young did, go and see them for yourself. The hills are ‘Basildon’s Green Lung’ and must be protected for the generations to come.