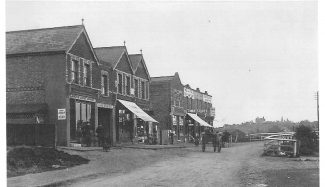 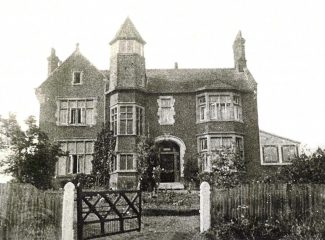 We frequently show at our photographic displays a photograph looking from the High Road, Laindon over the railway line towards Langdon Hills and in the middle of the photograph is this large house. I have been surprised how many people asked about it. So I thought the easy way was to reprint with permission the article Dr Rodney Cole wrote in the Basildon Natural History publications a couple of years ago.

Lost House in the Forest: the story of Nore View by Dr. Rod Cole

Those who are familiar with the Marks Hill Wood Nature Reserve will appreciate that it consists of a remarkable mosaic of ancient woodland, arable and meadow, upon which a network of unmade roads and plotland was superimposed during the late nineteenth and early twentieth centuries. All former habitations have since been removed, courtesy of the Basildon Development Corporation, which bought up everything when it was planning to build a housing estate on the site. Fortunately for the whole region, that estate was never built, and instead the Essex Wildlife Trust was enabled to purchase its entire Langdon estate, including Marks Hill Wood.

What is not so immediately obvious is that there were two phases in the plotland saga. Both of them were made possible by the dramatic drop in the value of farmland following the onset of the agricultural depression in the 1870s. At first there was a tendency for quite opulent houses to be built, in the period before the First World War. After that came an entirely different stage, the reasons for which are not entirely clear, when smaller plots were sold, upon which a wide variety of humbler dwellings and summer huts – the Russians would call them dachas – was created, very largely at the behest of folk living in London and travelling to their country refuges by rail. The heyday of this process was in the 1920s-30s.

One of the most splendid of the earlier houses was Nore View, which stood in the midst of Nore View Crescent , currently set deeply in the secondary woodland, so that tall ash trees now grow where once there must have been some very fine gardens. Little remains of the vegetation of that cultivated era save the series of box trees which struggle to maintain their place in the dense growth. A particularly splendid copper beech tree was a fine legacy until only a few years ago, when it succumbed all too rapidly to the wood-consuming Giant Polypore fungus (Meripilus giganteus), and the dead tree had to be taken down lest it become too much of a hazard.

The very name of the house tells us plenty about what the area was like, over a century ago, when there was much less by way of woodland on the Langdon ridge. You would be hard put to it to catch a glimpse of the Nore, in the Thames estuary, from this spot nowadays, unless you were clinging to the topmost branches of the woodland – perhaps.

Yet there was a time, when the open and arable nature of the surrounding countryside was still a feature, when Nore View stood out as a distinctive landmark on Langdon Hills, visible to all who travelled on the Fenchurch Street to Southend railway – a “landmark well known to all regular train travellers”, as a newspaper report in January 1938 tells us.

Alas, that report in the Grays and Tilbury Gazette of 15th January was made in the immediate aftermath of a disastrous fire, which consumed almost the entire house. The report tells us plenty, not least about the levels of literacy expected of those both writing and reading the local newspaper at that time. We are told that the premises had been occupied by Mrs Mary Ellen Chataway over the previous 14 years, and that as she set off on the Saturday to visit friends in County Down, her housekeeper, Mrs Wood, went to Gravesend. The fire, in the early hours of Sunday, was first spotted by P.C. Wells of Langdon Hills. “The flames had by that time got a firm hold on the building and silhouetted it against the sky. All the other property stands below Nore View and is composed of small bungalows.”

By the time that P.C. Wells got back from telephoning the fire brigade in Billericay, the roof at the back of the house had fallen in, and the strong wind that was blowing soon spread the flames to the whole premises. The firemen were unable to get anywhere near the house with their motor pump, and instead they had to carry their hose and equipment up a slippery concrete path, to connect up with a hydrant about a hundred yards away from the fire. Even then, there was insufficient pressure to enable the firemen to spray the upstairs rooms. Despite their efforts, the flames soon consumed the front rooms, and the floors of the upper rooms crashed down upon the ground floor. Only one very small room on the east side of the house, and the conservatory on the west side, escaped the flames.

“Not a vestige of furniture was to be seen in the ruins, but in one room a bath rested up-ended where it had fallen from the room above.” The remains of some fine mural paintings of Egyptian scenes could be seen on the charred walls of the drawing room. There was a suggestion that some valuable Eastern art treasures had been consumed in the flames, along with some fine furniture, but it was subsequently learned that these had been removed some time earlier.

Once it was safe to leave the scene, the gates leading to the house were bolted and locked, and a police officer remained on duty to prevent sightseers from doing damage to what remained, or injuring themselves.

The article tells us more. The house was built in the 1890s or thereabouts, and at that time stood practically alone on top of the hill. It was possible to see the Nore Lightship from a tower on the eastern side in clear weather. The builder was Mr Dolman, who was the head of a London firm of contractors and builders at Bromley-by-Bow, and he and his family remained at Nore View for some time, before letting and later selling the property. It was said to be one of the best built houses in the Laindon district.

One further detail was that it stood on the boundaries of three parishes: Laindon, Langdon Hills and Lee Chapel, and that an old footpath ran through the spot where the house stood. Maybe significantly, a very old pollarded hornbeam stands some distance away from the site, and this might well have been a parish boundary tree.

All that remains of this once proud house is a quantity of rubble – and those box-trees. Interestingly, the Chataway family owned other property in the area, including Castlemaine Farm, which stood close to the site of the Castlemayne public house. I can recall being driven through the rain to this house by my parents in order to watch the Queen’s coronation in June 1953 on the Chataway television set – and being awe-struck by their gigantic St Bernard dogs and the raucous macaw.

I am grateful to Randal Bingley for drawing my attention to the article in the Grays and Tilbury Gazette.