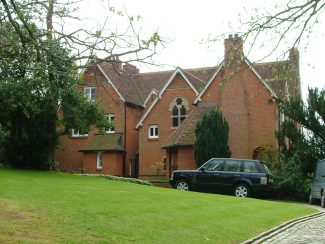 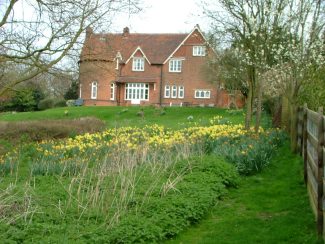 zoom
Back of the Old Rectory
Ken Porter- 2007 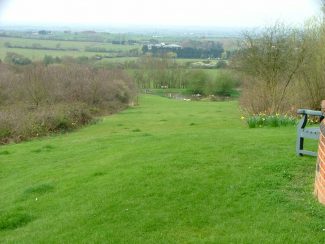 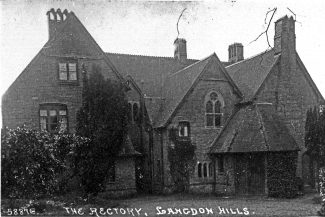 If you take a walk down Old Church Hill, Langdon Hills you will come across the very impressive Langdon Hills Rectory which was built in 1875/7. It is understood that when Reverend Euseby Digby Cleaver took the living of Langdon Hills it was on the understanding that he rebuild the old Rectory at his own expense. It is believed that it cost £2000. A mortgage was given amounting to £1107 by the Ecclesiastical Commissioners.

The early Rectory, on the same site but further from the road, was built around 1795. Reverend John Moore was the Rector at the time and was so charmed by the area that he decided to spend the summers here. He therefore had a small cottage of wood built, it faced west. This is believed to be Langdon Hills first purpose built Rectory.

When Reverend C Packman took up the living in 1825 he extended the back of the building. He also built a cottage, a stable and Chaise house (Chaise – a horse drawn carriage for one or two persons) at the back of the Rectory. These stood until demolished in 1962.

The new Rectory was rather elaborate for the small Langdon Hills living but the Reverend Cleaver was a generous Irishman from the linen family of Cleaver. He instructed a famous architect, William White who also designed St Mary’s Church on the hill.

William White was born in 1825, the third son of the Reverend Francis Henry White. The family had a long tradition of dedication to the church, so it seemed natural for him to become involved throughout his lifetime, in striving to set a proper standard of church arrangement and in determining correct principles for the retention and restoration of ancient buildings. The building works of January 1890 listed his works as: 120 private houses; 90 school and school houses (70 new); 80 Rectories (45 new); and nearly 250 churches (about 60 being new or rebuilt). He died in 1900.

Our Rectory stands nearer to the road than the old one. It is of red brick and its most striking feature is its rounded ‘tower’ of two rooms at the south west corner, the effect being somewhat like an Oast house. The upstairs room of this tower was used as a private chapel by his wife Julian, who though born in the East Indies was Italian and a practicing Roman Catholic.

The chimney stacks were constructed as to prevent smoking, they do not appear to have been that successful. Although they were commented on in 1889 when the building was described as “the cosy little vicarage, whose gable ends peeped pleasantly through the foliage and whose chimneys we observed, were ingeniously planned to prevent their smoking”

Although the Rectory had its own well in the back garden for water it also got water from a well opposite, the same well that was to supply water for Goldsmiths and surrounding cottages. It was, for a time, donkey powered.

Due to deterioration and that many parts of the building was not being used a new rectory was built in Berry Lane in 1980/1. However the current owner has restored the whole building to its former glory and beyond.

There is a magnificent view at the back of the house towards the south west and west, overlooking many miles of lowlands towards Dunton, Bulphan, Orsett etc; Queen Elizabeth Bridge and Canary Wharf can be easily seen on a clear day.