Formerly known as the 'Hut Club' 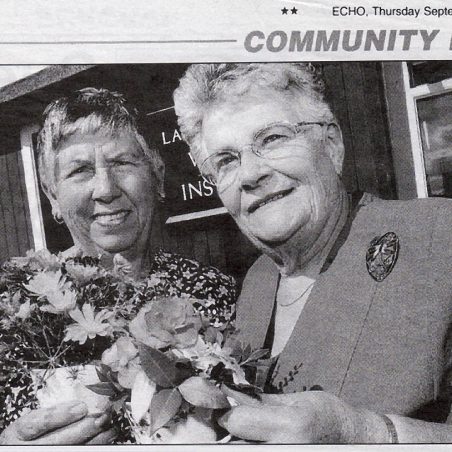 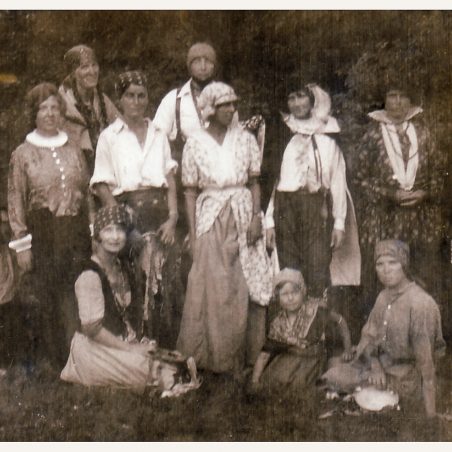 The cast of "The Gypsy Countess'', performed in the grounds of "Goldsmiths" 1928. 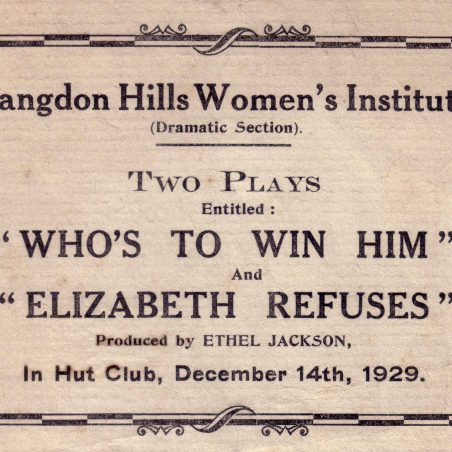 A programme dated 1929 showing the hall as the 'Hut Club'. 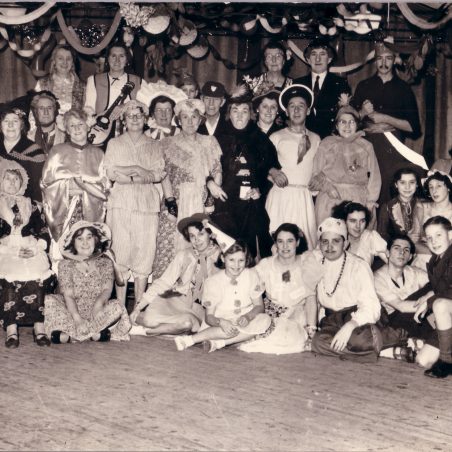 Was this a pantomine, variety show or fancy dress party? Unfortunately the photo is undated. 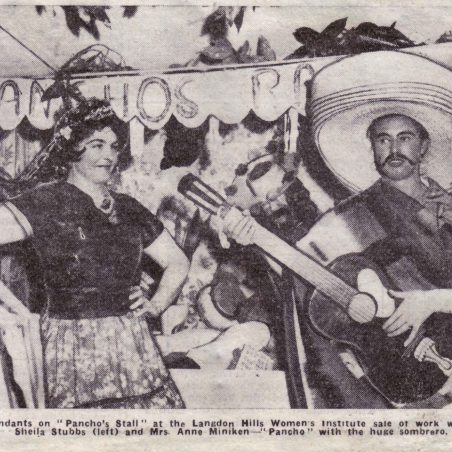 A bazaar in November 1961. Sheila Stubbs and Anne Miniken on "Poncho's Stall'. 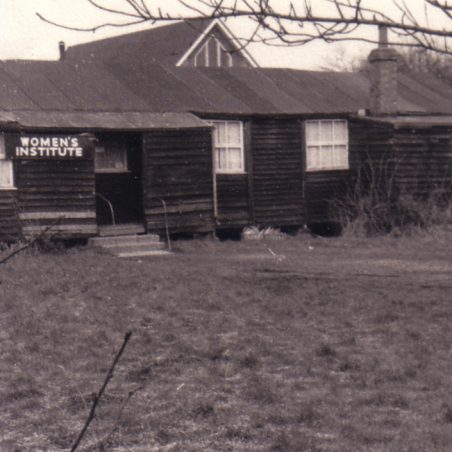 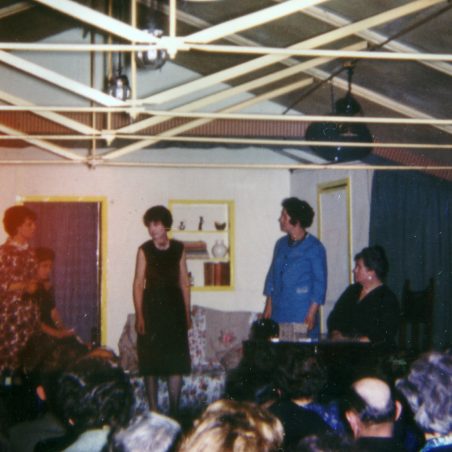 A play photographed in the sixties - note the gas lights were still in position. 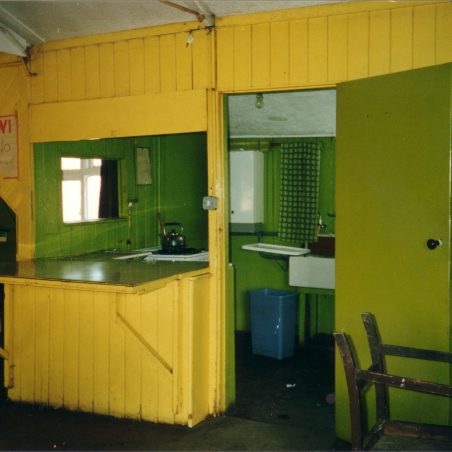 The kitchen area of the hall before the re-decoration in 2003. 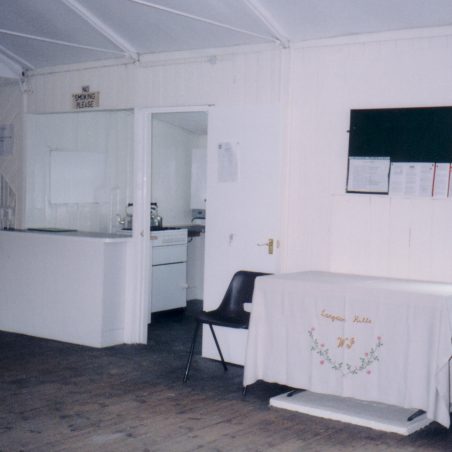 The same view after re-decoration. 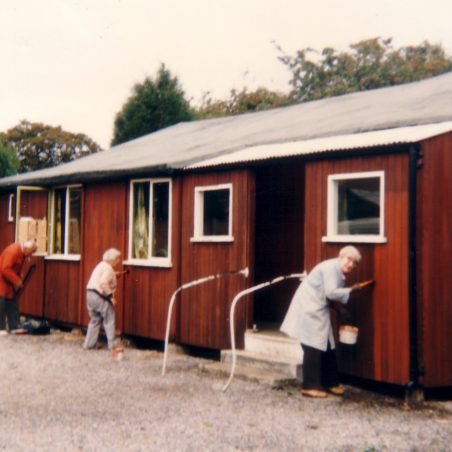 Painting the outside of the hall. 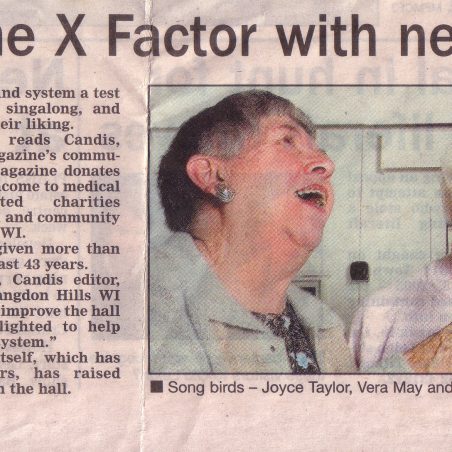 On a 'High Note'. Joyce Taylor, Vera May and Audrey Clarke.
The Basildon Evening Echo

The WI hall isn’t visible from the High Road because it is tucked away just a few yards along Samuel Road and set back slightly from the road. Some people may be unaware of its existence and that it is one of the few old communal buildings now remaining in Langdon Hills.

I had the pleasure of meeting two long-standing members of the Langdon Hill’s branch, Joyce Taylor (Secretary) and Audrey Clarke (past President) at the hall, who were happy to tell me some of its history and the activities that still takes place there.  They were also kind enough to lend me their scrap books containing newspaper cuttings and photos, a few of which I have included in this article.

The Langdon Hills branch of the WI was formed in 1924 and meetings initially took place in the small Baptist Church that stood at the end of a small row of shops on the east side of the High Road known as Nightingale Parade.  As a point of interest, Joyce recalls many shops south of Laindon Station, six of which were grocers and wonders how so many managed to survive in the small community where many people “grew their own”.  Audrey also remembers the brickworks in Florence Road (now Florence Way).

Garden parties and pageants were popular WI events and members formed a choir and an active drama group, which produced and presented many plays, most of which were performed at the hall in Samuel Road, known as the “Hut Club” but at least one play was performed outdoors. With the kind permission of Mrs Brooks, “The Gypsy Countess” took place in the grounds and woods of “Goldsmiths”, (a large house in South Hill, Langdon Hills) the story being reminiscent of the folk song “The Wraggle Taggle Gypsies O”.

After the last war, the group relocated to the hall in Samuel Road, where they continued to hold their meetings.  The building, which had apparently been constructed from former army huts, was renamed “The WI Hall”.   On summer evenings, the soft sweet sound of the choral group’s practice sessions at the hall, could sometimes be heard floating on the air in the neighbourhood close by.

Audrey explained that originally, Isaac Levy of “Primrose Lodge”, Langdon Hills, a well-known local builder and businessman, had acquired the WW1 army huts to store his building materials and tools in.  Several local roads were named after his children: Alexander, David, Samuel, Emanuel and Florence.  He sold the hall to a Mr Alfred Brooks of “Goldsmiths”, who installed a fine billiard table and turned it into a meeting place for WW1 servicemen, somewhere for them to have a drink and relax.  It was at that time when it became known as the ‘Hut Club’.

The WI movement began at Stoney Creek in Canada in 1897 when Adelaide Hoodless addressed a meeting for the wives of members of the Farmers’ Institute.

The first British WI meeting took place on 11 September 1915 at Llanfairpwll on Anglesey in North Wales. The WI was originally set up in the UK to revitalise rural communities and to encourage women to become more involved in producing food during the First World War.

The WI celebrated its 95th anniversary in 2010 and today plays a unique role in enabling women to gain new skills, take part in wide-ranging activities and campaign on issues that matter to them and their communities. The WI is a diverse organisation open to all women, and there are now WIs in towns and cities as well as villages.

Much has changed both socially and geographically over the years. Pageants and garden tea parties are mostly events of the past.  The Institute has moved along with the times and is no longer known as just the ‘Jam and Jerusalem’ of yesteryear.  Since the fifties, women’s lives have become more diverse than ever as new opportunities opened to them.  Many manage to combine a career along with homemaking and bringing up a family and are just as likely to be found using a laptop rather than just a sink top.  The very popular film and stage show “Calendar Girls”, featuring the Rylestone and District WI (based near Skipton, North Yorkshire) who raised £2m for Leukaemia in 1999, shows what can be achieved with a bit of tenacity and plenty of determination.

Sadly, the Langdon Hills WI drama group and choral group no longer exist, the choir having disbanded around ten years ago.  However, the camaraderie of the women remains strong and currently the group has 46 members.  Meetings are at 2pm on the second Tuesday of each month.  Various activities take place on other days including keep fit and sewing club.

Although the WI own the hall, the Langdon Hills group have to pay for all costs.  This has necessitated a great amount of fund raising over the years for essential repair and restoration work.  Several lottery grants as well as much funding from Cleanaway (Veolia), Mr Toomey, Rotary, Round Table, The Masons, and Basildon Council, among others, helped along the way.  Audrey estimated that as much as £90,000 had been raised since 1993.  This paid for roof repairs, decoration and the mandatory installation of disabled toilet facilities.  Desperate for funds in 2003 to pay for much needed refurbishment, reluctantly the billiard table had to be sold.  It raised just £30.

Thanks to the ladies’ hard work and efforts, the hall is in very good condition and is due to have a smart new floor covering laid this year.  Without the dedication of the WI ladies, the hall may well not have survived.  Long may this lovely reminder of years gone by be supported and appreciated by the local community. The hall is available for hire and is a popular venue for bazaars, plant sales, group meetings and the occasional wedding reception.

No doubt plans are already underway for a splendid, well deserved Centenary Celebration in 2015 and The Laindon Archive would like to offer the ladies of the Langdon Hills WI their very best wishes for the future.