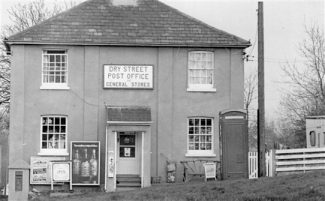 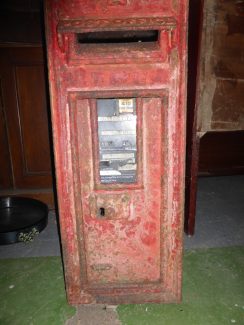 On the bottom left corner of the building known as the Red Cow you can see a Victorian Post Box.

The Red Cow had been for many years the local Post Office and general store. It closed down in the mid 1970s when its owner Paul Lucy and his wife opened up a new green grocery business in the new Triangle Shopping Centre in Langdon Hills High Road.

But what happened to the post box? – well, it was obtained by the Langdon Hills and District Conservation Society (now ceased) and has been languishing in the garden of Geoff Williams, (local Councillor) as part of his BBQ.

Geoff believes it now requires a new home and has given it to Basildon Heritage who will endeavour, with the help of donations and grants, to have it restored to its former glory and then hopefully have it displayed at Wat Tyler Park.

I believe it is one of only two Victorian Post boxes in the Basildon Borough, the other being at Laindon Common.