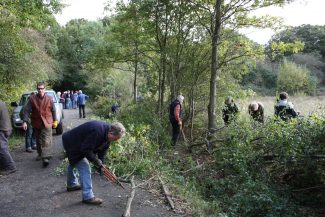 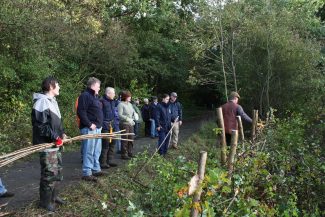 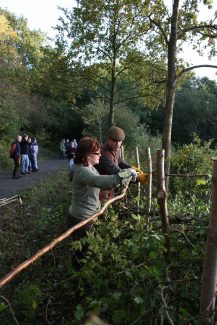 zoom
Jim giving instruction on how to weave the hazel binding .
Colin Humphrey 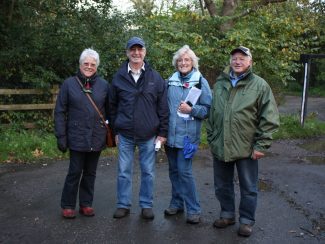 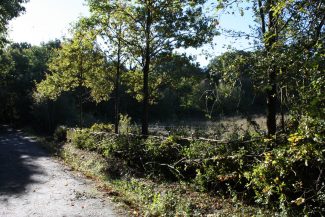 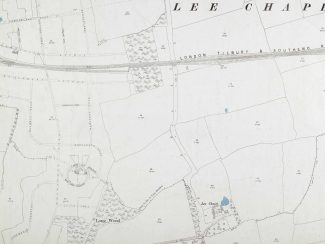 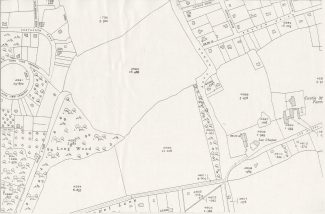 On Saturday 2nd November 2013, the ‘Laindon Archive’ accepted an invitation from ‘Langdon Living Landscape’ to watch one of its projects taking place in the bridleway that runs from the eastern end of Lee Chapel Lane to the northern end of Staneway.  This particular project is one of several funded by a grant from Veolia.  It involved the laying of a hedge consisting of a row of small Hawthorne, Ash, Field Maple and Oak trees, 200 yards in length, that were planted by Basildon Development Corporation when the bridleway was created in the late 70’s.  Langdon Living Landscape had engaged the services of a professional hedge-layer called Jim to train a group of volunteers in this traditional country skill.

Six of us met in the car park in Lee Chapel Lane; Nina and Colin Humphrey, Linda Williams, Brian and Odette Cordell and Pete Robertson.  We walked along Lee Chapel Lane and found the hedge laying group working in a lane a few yards west of the original Green Lane. This project was of particular interest to Pete as he used to be involved in hedge laying.

At least a dozen people had been working since around 10 am and we could see the difference that had already been made.   The overgrown hedge had been opened up, letting in more light to the lane revealing a good view of the fields beyond.   At regular intervals along the lane, a standard oak tree had been left to grow and in between those, others were partially cut through and bent over at an angle (known as ‘pleachers’).  We were fascinated to see it all taking shape.  We watched for about an hour and then continued on our walk to visit Brian and Pete’s old neighbourhood, Primrose Hill.

For once the weather forecast proved absolutely correct when around 3 pm a rain shower caused us to pull the hoods of our coats over our heads.  Thankfully it didn’t last long and we were given an interesting tour by Brian and Pete of the area where they had spent their youth, recalling a few tales such as floating around on an old door on Lee Chapel Pond.  We were shown the large old oak tree they used to climb and which Brian had once fallen from, thankfully unhurt.   Pete had brought along a very useful large scale map and was able to point out exact where they had lived which is roughly where Gainsford now stands.  They also recalled the various farms in the area including Castlemaine, named due to its castle-like appearance and which gave its name to the Castlemayne Pub.  We smiled to think that Castlemaine that once sold milk now sells beer.  On that merry note, we returned to Green Lane where the workers were progressing well.

Stakes had been inserted vertically at regular intervals and then three long slender hazel branches (known as ‘heatherings’ or ‘bindings’) were interwoven horizontally to form a plait along the top.  Jim the instructor made it look very easy and a few of the volunteers were invited to have a go.  The top of the new hedge was then ‘tapped down’ into place.

The smart new length of hedge, roughly 28 yards, shows what can be achieved in just a few hours and hopefully some similar work parties will be organised for the future.  As the workers were collecting their tools and preparing to finish for the day, we made our way back to the car park and said our goodbyes, thus completing the last of the walks for 2013.

Editor: I have added two maps showing the location of Lee Chapel Farm and the pond, click on the maps to view a larger version. To return to the page please click the back arrow in the top left hand corner of your browser.