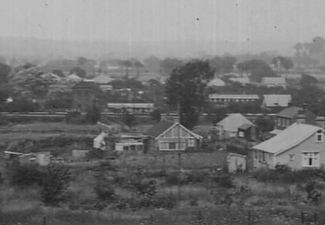 zoom
The crossing and Water Tower from Lee Chapel South 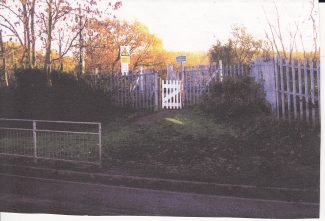 zoom
The Crossing from Hatterill as it is today
Fred Taylor

Although Fred Taylor provides us with a useful map of Northumberland Avenue he omits to indicate where, in that road, Tom and Beatty’s bungalow (“Clovelly”) stood. It was on the seventh plot or so counting from the Laindon High Road end and on the north side.

As Fred will no doubt remember, a further seven or so plots further down was “The Homestead” on the corner of Hertford Road, virtually opposite what was and still is known in railway parlance as “Water Tower” crossing, the level crossing to Salisbury Avenue he indicates. This used to be what was known as an “occupation crossing” and it had to be provided by the LTSR railway builders for the convenience of the occupants of Little Gubbins Farm to get their carts from the fields on one side of the track to those on the other side.

Laindon Station and much of Northumberland Avenue and Salisbury Avenue was built on the fields of the former Little Gubbins Farm, in 1871 being offered sale as part of Blue House Farm.

The no longer existent water tower adjacent to the crossing was all that remained of the abortive attempts to establish a clean water supply to the Laindon area at the end of the 19th century, Elijah Collings of hardware shop fame being its prime mover.

Several attempts have, since those times, been made by the Railway Authority to close the crossing because it was being used by passengers seeking to avoid fare payment, it being so close to the ends of the platforms at Laindon Station and each time their efforts have been defeated on the basis that it is a public right of way and should remain so unless an adequate alternative is provided. Complete closure is what happened at “Barkers Crossing” at the east end Northumberland Avenue where Green Lane crossed the railway. Green Lane is the road that Fred Taylor, interestingly, indicates as “Church Lane” on his map. This crossing that gave access to the Primrose Hill Estate was so named from the adjacent General Shop of the Barker family adjacent. It was closed when Staneway, the new road to the “Crown” Hotel was provided with a bridge a short distance further east.

“The Homestead” opposite Water Tower crossing was the home of Wally Sorrell whom, I suspect, Fred Taylor will remember as one of Laindon’s more eccentric citizens. As well as the fruit and vegetables Fred rightly says everybody grew on their plots, Wally Sorrell grew his own tobacco! This he would harvest and “cure” by hanging to air-dry on the long veranda of “Homestead”. It would then be smoked at frequent intervals in Wally’s pipe which he would keep clamped in his mouth most of he time. Because his homegrown “baccy” was pretty vile, Wally moved around in a permanent kind of a haze of smoke with a very distinctive odour that was instantly recognisable well before one met him. Wally was a great talker with an interesting tale to spin having served at some time as a lumberjack in Canada. He knew a lot of Laindon residents and would explain to newcomers that “The Homestead” had been self-built around its most important content, a full-sized billiard table, simply to keep that safe and dry, the less important rooms like bedrooms and kitchen having been constructed as lean-tos only as a hasty after-thought simply because his wife insisted!

In his latter years, Wally, who believed in what he called the “Swedish method” (a system of, when striding, swinging the arms from the shoulders until they were at 45 degrees to the body but never passing the arms further back than level with the hips resulting in an odd looking gait) walked twice a week from Laindon to Chelmsford for exercise, returning to Laindon on the bus, a routine he kept up until shortly before his death.

Fred Taylor explains how the original Northumberland Avenue did not follow the same line as modern day Hatterill. This is because when the Basildon New Town built their appalling looking “Five Links Estate” fully justifying its nickname of “Alcatraz” from its ghastly external appearance whatever might be the merits of its interiors, they decided to construct Hatterill across the 19 or so building plots that backed onto the railway along the south side of Northumberland Avenue together with the Barker’s shop. Some of the previous properties over which they built were still, at the time, in the ownership of the railway who had taken up so much of the land forming Northumberland Avenue and Salisbury Avenue when they cut the line through to Pitsea in the 1880s. Before crossing Green Lane the railway passed through the middle of what was known as “The Plantation”, a fairly dense grove of trees that had existed for many years on this spot. It had an area of just over three and a half acres and had previously been known as “Hosiers” suggesting it had once been planted to produce the material for basket making. The copse is shown on the map of about 1710 purporting to be a copy of the Elizabethan map of Laindon Hall in the Essex County Records Office at Chelmsford. A colour photograph of that map is available at Laindon Branch Library.

The church of St Michaels of which Fred Taylor writes and shows on his map was in Green Lane and had been constructed so close to the edge of “The Plantation” that, with time and before its demolition, it became almost lost in the foliage. It was, in fact, a “chapel” or outpost of St. Nicholas, the parish church of Laindon. Another such was St. Peters built on the north side of St. Nicholas Lane next to the grounds of “Hiawatha” in the High Road. The church hall for St Peters was on the opposite corner to “Hiawatha” and was in constant demand for social activities of many kinds. Both St Michaels and St Peters were only of timber-framed constructions. They had been built as evangelical ventures fully in keeping with the style of the Plotlands era and, if it had been realised at the time they were both irrevocably destroyed, one or other of them could easily have been moved to the Dunton museum site and been preserved for prosperity. I look forward to reading the further reminiscences of the area that Fred promises.