Does this spark any memories 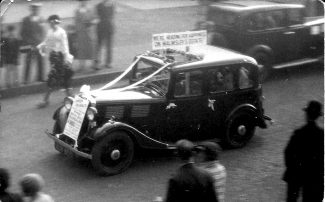 The photograph above is from my husband’s family which shows a car at a carnival (not sure which one) advertising bungalows for sale in Laindon. The sign on top of the car says “We’re heading for happiness on Walmsley’s Estate”.

The sign on the front of the car is headed “Laindon for Health” then “brick built bungalows selling for £360”. As these houses were built by my husband’s grandfather, it would be great if anyone can shed any light on this for me? I estimate that this was late 1930s early 1940s.

My husband’s grandfather lived in Laindon in the 1920s and 1930s.  His name was Albert Laycock and his wife was called Ivy, but he may have gone under the name of Walmsley, as he subsequently changed his name to Walmsley in the 1940s. They had two sons whilst living in Laindon, Allan and Colin. When Colin was born in 1934 they were living in York Villa, High Road, Laindon. I’d be fascinated to know where the Walmsley Estate was and if it still exists?