You are here: HomenextBuildingsnextCafe'snextThe Bungalow Cafe 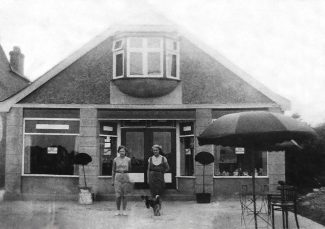 Jack Whomes and his wife Annie lived in East Ham and Jack worked in the Victoria and Albert Docks. They had a weekend bungalow in Worthing Road as early as 1918 called Roselyn which they visited regularly. So when Jack retired it was no surprise that he and Annie decided to move permanently to Laindon.

They acquired a large piece of land facing the A127 and in 1931 had a large four bedroom chalet bungalow built with a large room at the front to run a cafe. It stood on the London side of the A127 next to the St John’s Ambulance building and very close to the police houses and the Dart Factory.

Who remembers it, will the following advertisement help?

No lantern has ever gleamed more brightly than that which swinging over the door of the old inn, welcomes the traveller of many years ago. To the sleepy inmate of the rattling stage-coach, it flashed a message of safety – a haven of refuge from the terrors of the highwayman. It spoke, too, of crackling fire a table-spread with food and wine and a soft, warm bed.

To-day, the stage-coach has gone. The Lantern no longer cheers the wearied passenger, but a new roadster is alive. The traveller of the twentieth century no longer fears the highwayman but the need for a rendezvous – the need that urged his ancestors on to the wayside inn to rest there. The twentieth-century cafe’ which caters for the traveller has an equally important status as the old tavern of the town-particularly if the cafe’ be as modern as The Bungalow Cafe on the Arterial Road at Laindon, Essex.

The Bungalow Cafe has been in existence for a very short time but not withstanding its youth, it has already established a considerable reputation amongst motorists, pedestrians and other citizens of the open road. It is admirably suited for halting place for Southend tourists and travellers on the main Chelmsford-Tilbury road. Enjoying an ideal situation amidst country that is pleasant and gloriously unspoiled, this cafe is well worth a visit. The service provided is of the best, being personally supervised by the proprietor – Miss A Whomes.

Home-made cakes, pastries and the like are a speciality here. Both luncheons and teas are available and though the largest parties are catered for in the most efficient manner, the same individual attention and personal service is given to the passer-by who would enjoy a snack. Minerals of all types are available.

Excellent food and a fine service have made this cafe extremely popular to-day but there is something more. The Bungalow Cafe is attractively furnished throughout. Meals can be enjoyed here because the rooms are pleasant. There is nothing here to suggest exclusiveness, for there is always a homely and comfortable atmosphere-one that is conducive to joys of a social outing.

It seemed an ideal spot to have cafe to catch the day trippers on the way to Southend but unfortunately a few years later the A127 was duelled and they found themselves on the wrong side of the road. It closed down at the beginning of the Second World War and never opened again. The family continued to live there until 1974 when it was compulsory purchased by the Basildon Corporation and has since been demolished.

Well who remembers it, I know that one of our contributors to the site visited it on many occasions.

I must thank Maureen Williams for the information on her family’s cafe.