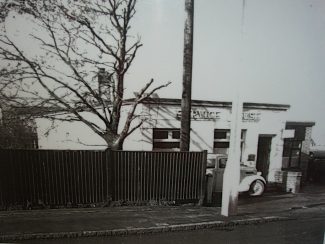 I was thrilled to come across this photograph of Service House which was next to Toomey Motors in the High Street and housed both the offices of Toomeys and A.H. Hall who were coal merchants and had their coal yard at Laindon Station.

I worked in Service House from 1963 to 1970 and have been searching my mind to remember others who worked there too.

When I started Jack Brooks and Peter Toomey were directors and Bob Pay was manager of the coal office (they were keen cricketers and I noticed them looking very young in one of the photographs of the Langdon Hills Cricket team) Michael Toomey later took over and built the Toomey empire as we know it today.

I remember Fay and Syd Phillips, Ian ? and ‘Nobby’ Clarke were in the stores, salesmen were Ted Powell and Bill ?, Sandra Wright manned the petrol pumps and switchboard and married Don Shepherd who belonged to a local band – I think called the TW Five – not too sure of that though. The coalmen were Fred Bundle, Jack Taylor and two others whose names I cannot recall although the name ‘Keeble’ comes to mind.

I wonder if these names ring a bell with anyone and maybe some more could be added – I’m sure there are quite a few I have forgotten!