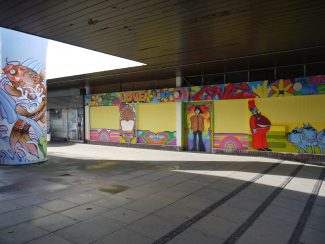 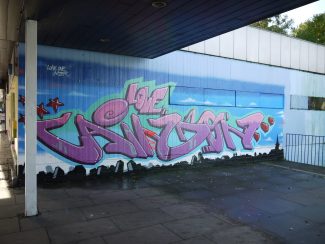 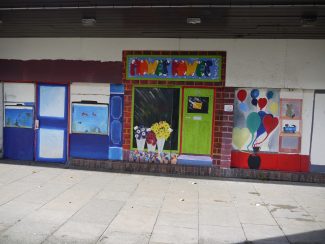 Love Laindon was set up by the churches in Laindon with two distinct purposes. The first was to redecorate the shopping centre to make it a nicer place for local people while its future was decided. For the churches, it was an active way to be seen serving the community and building relationships. The second purpose was to have a unit in the shopping centre that would provide various community workshops and activities that would address some of the needs of the people of Laindon.

Local people have felt overlooked for some time, and we hope that this project will show that people care about their community and demonstrate God’s love in a very real and practical way.

To date we have painted railings, weeded between cracks in the pavement, cleaned up the area around the war memorial, scraped and painted the bridge between the shops and the housing estate and cleared the drains that run down the centre of the shops which has stopped the flooding which used to be a big problem. This work is ongoing and volunteers come together regularly to carry this on. This work has been funded by the churches.

It was always the intention for the churches to work closely with other community groups and with individuals to help encourage a sense of pride and ownership of the centre. So far we have worked with the following groups:

The Disability Inclusion Society: This organisation works with people aged 16 years or older who have special needs, using creative maintenance projects to build self-esteem, develop skills and integrate people into the community. They have produced some great art work around the centre, creating an old fashioned ‘street’ through the blue hoarding and painting a garden landscape on the barber shop wall. They have worked with children from Cedar Hall, a special needs school and with older people who are not in employment. They have also assisted with the general maintenance, and the process has been just as important as the end product.

James Hornsby School: The local senior school have painted a mural with their gifted and talented group which is now displayed on a boarded up shop front. It is hoped that they may be able to become involved in other aspects of the decorating too.

Xplore youth group: This group for year 6 and up, meet in Manor Mission Church. Many of them come from difficult backgrounds and some have been excluded from school. They have worked with a local graffiti artist to produce a mural on the fish and chip shop wall and to help with the general decorating.

Local graffiti artists: Artists who live in Laindon, both individuals and a group known as BraveArt are giving up their time to start decorating the main pillars in the centre of the shops. Some have already been working with Xplore on two walls and we are hoping to start ‘The Bin Project’ encouraging local youngsters to get involved by designing and decorating the bins under the supervision of the artists. Many of them come from youth work backgrounds.

Laindon and District Community Archive: This group has used the shop as a base for some of their meetings and have provided historical images of Laindon for the artists which have been incorporated into some of the artwork.

Essex Wildlife Trust: We are working together to introduce the ‘connecting green spaces’ initiative to create flower planters that will add colour to the shopping centre whilst also encouraging wildlife, thus helping insects to move around Laindon. Signage will encourage people to try similar things in their own gardens and window boxes with some ‘how to’ tips. It is hoped that building and planting these flower troughs will be done through community days and by involving other local community groups and primary schools.

Members of the community: We have encouraged local people to get involved by advertising through local newspapers (The Echo and Standard Recorder) and local radio (Gateway 97.8FM). We have also run a paint amnesty for used paint to be donated for decorating the shop. We are planning to run a similar donation system for seeds and bulbs for the planters.

It was hoped that the Love Laindon unit would be used to serve the community. To date, the unit has been used to store the paint and other equipment for redecorating the centre and has served as a base for the various ‘decorators’ (DIS currently come to the centre on Tuesdays and Fridays, Luke the graffiti artist comes on Wednesdays and Fridays and volunteers come every Saturday and occasionally in between). The size of the unit has restricted our plans, but we continue to work towards the following ideas, the first three of which already happen to some extent:

Volunteer sign-up: The shop will be the focal point where members of the community can drop in to find out what we are doing and how they can participate. They will be able to sign up to volunteer or drop off paint through our ‘paint amnesty’ (all paint will be used for Love Laindon where possible or passed to other charities if we cannot make use of it).

Christian library: People will be able to ‘borrow’ Christian books on a variety of topics. These are not signed out and won’t be chased to be returned.

Signposting useful organisations: There will be notice boards advertising events that go on in local churches such as toddler groups, bereavement groups, coffee mornings etc. There are many good things run in the community that need advertising so people know they exist! There will also be posters advertising other organisations that people may find useful – debt advisory services, support groups, etc.

Prayer stop: People could drop by to ask for prayer, either immediately with people on site, or by posting a request in a confidential box or on the prayer wall which would then be passed to a prayer team.

Young Peoples café: We would like to have a café, run by young people who have difficulty engaging in education or work, who would volunteer in return for a reference and training in basic hygiene, baking and customer service. We would use AQA awards and NVQ’s, alongside other recognised qualifications to build self-esteem and raise peoples aspirations. Some young people have had a negative impact on the community, so encouraging them to serve their community would also help to build positive relationships with their neighbours. Local people regularly tell us that they miss having a café in the centre, and one which helps the community by offering opportunities for people that may otherwise miss out would be doubly beneficial. Whilst providing an income for the project, this café could be used as a base for numerous other projects which would raise peoples ambitions.

Workshops: The aim is that the Love Laindon ‘shop’ would provide a safe place for people to come with a variety of needs. Different workshops would be run e.g. knit and natter groups, card making, jewellery making, CV workshops, interview skills, cooking on a budget, bike maintenance, pampering events for single mums and carers, computer skills, anger management, mental health support groups, parenting courses, Mums and toddler groups, sewing courses, homework clubs, etc. Each of these would be run by volunteers with expert knowledge in each area.

CAP (Christians against poverty) Debt Advisory service have expressed an interest in providing their services through our shop.

Some trained listeners have expressed an interest in providing their services through our shop.

Love Laindon is a way of the local churches reaching into the community. As such, there is a Christian ethos behind every activity even if the activity is not directly run by Christians. Some activities would be overtly Christian e.g. alpha courses or similar introductions to the Christian faith, bible studies, prayer meetings, etc. These would be open to everyone. Many of the activities that would run would use Christian material e.g. marriage courses, parenting courses, debt management courses produced by the church which are based on Christian principles. If anybody wants to discuss faith, we would be happy to do so in a non-pressured environment. Christian pastoral support would be available to people. However, we are keen that services provided by Love Laindon are not just provided by the church and we are keen to work alongside groups not linked to the church.

Local sourcing: Love Laindon is keen to support local business and therefore would try and source materials locally wherever possible. We would also try and avoid running in competition with businesses that already exist in the centre.

Fairtrade: Where possible, we would like our produce to be Fairtrade and ethical.

Love Laindon is aware that this would be a huge undertaking. Many people from the local churches have expressed an interest in volunteering in different aspects of the project and there is a wealth of knowledge which could be drawn upon. This is a project that would have to concentrate on a few small areas first, then gradually grow as foundations were built upon, the needs arose and materials became available.

Originally the owners and now the administrators, Basildon Council and the local police are all aware of and in support of the project so far, as are Laindon Baptist Church, Laindon Methodist Church, Manor Mission, Noak Bridge Christian Centre, St Johns, St Mary’s and St Nicholas Church. Love Laindon has liability insurance to cover both the decorating and the activities that run in the unit.