From Beer House to Public House 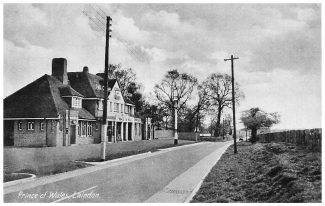 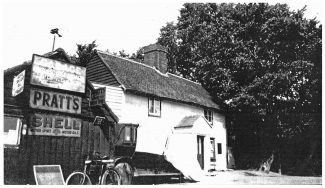 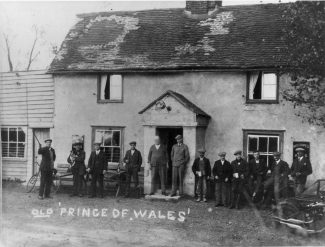 The Beer House that became the Prince of Wales

I do believe this was once known as Hollowbread’s ale house.

This is the old Prince of Wales in Wash Rd and I suggest it dates pre WWI as the roof and chimney are in a good state of repair and there is no window to the saloon bar which is evident in later photographs.

This photo was probably taken circa 1930 and the state of the roof and chimney have badly deteriorated from the previous photo. The person standing in the left of the doorway (facing) was Charles Franklin and the person on the right was Jack Franklin who had a butchery shop in Wickford High St. Charles had a daughter who often called Hessie and who maried Tom Webster jnr., and two of her children can be seen in the photographs of Wilson’s the chemist.

It was only a few years after this photo that work began on the new Prince of Wales in 1934 and opened in 1936 with Charles as the licensee but he did not remain there for very long and retired to his bungalow “Petcheys” located between the new POW and Madew Nurseries of his daughter and son in law.

This is the new Prince of Wales opened in 1936 and the bungalow of the Charles Franklin can be seen in the background. I would suggest that given the state of the road, this was taken after WW2. It had several licensees and I believe the most well known to have been Lionel Hyatt who has been featured in other pages of the website.

A futher pesonal memory in respect of the Prince of Wales dates from 1934 when it was being built. Myself and my friend, Ken Ripper, used to play cricket in the Buckenham’s meadow opposite after the cows had gone in for milking. We had a bat made from a piece of floorboarding with cloth wrapped around the handle. One afternoon, the General Foreman from the POW, a Mr Fred Wainwright, whom we later found out was connected with Hutton CC, came across the road and gave us a real cricket bat, youth size. Christmas came early that year.