My Life My Radion 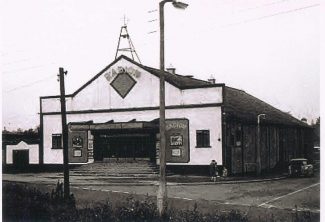 The Radion what can I say, it was the hub of Laindon when I was a child. As I have said before we were not too well off so our Saturday 6p for the cinema and our three pence and a coupon for our sweeties at Pelham’s on the way was our weekend treat and what a treat. I recall the Radion had 680 seats and most of them on Saturday mornings were filled with us kids for our Roy Rogers club and it did not end there we had fancy dresses: best cowboy for the boys and best Indian for the girls and talent shows. There was also the Flash Gordon serial that always ended each week with a cliff hanger and started the next week a few frames earlier so he had not gone over the cliff, the tillers easily taken in, but it was exciting and had us on the edge of our seats. We also always had a cartoon Tom and Jerry, Donald Duck and of course Mickey n Minnie Mouse. Every boy wanted to be Roy Rogers, every girl Dale Evens and we all dreamed of Trigger in the back garden. Then there was the roof raising sound of “A four legged friend “sung by us all.

Later I began to go along not only to watch a film but, if my little brother was not in tow, to have a snog in the back row and a sly cigarette, before I was allowed to smoke. Someone must remember the smelly little red velvet seats with the metal ashtrays stuck to the back, magic! One film I remember clearly seeing was the “Blackboard Jungle” approx, 1957, I fibbed about my age to get in. It was a film about anti-social behaviour in schools. Glenn Ford played the depressed wimpy teacher and Sidney Poitier played a black rebellious student. This film really marked the beginning of a period of teenage rebellion of Teddy Boys and Girls, full skirts swinging as we danced in the aisles and ponytails flying. Of course the great Bill Hayley played the unforgettable theme tune “Rock around the clock”, this was the start of big changes in the world “The swinging sixties”, “Women’s Lib”. We all felt the vibes of great new things to come and us Laindon teens were determined to be part of it, we would not be left behind and our old Radion with its dome shaped roof shook with the promise of exciting things to come and come they did.

Then who could forget the Pathe news item, the Cockerel would appear on the screen and the R.K.O. radio mask and a short film followed telling us about events in other parts of the world. I have read that in 2002 thanks to a lottery grant 3500 hours of filmed history and 90,000 news items have been digitised, brilliant! Told you exciting times to come. There would also be a short film of local advertisers, trailers for the next week’s film and then the main movie. The projectionist was at the back above the seats his beam of light shining through the cinema, the cigarette smoke swirling sometimes so thick you could hardly see the film through it. Sometimes the projector (in fact often) would break down and everyone would whistle and stamp their feet and sing why are we waiting, poor man.

Another film I saw approx 1959 which sticks in my memory more than others was “Psycho” with Janet Leigh and Anthony Perkins, very scary for those times anyway, Alfred Hitchcock the producer made it a rule that you only went in at the start of the film if you missed the start you had to wait until the next showing, he said if you saw the ending first it would spoil the whole film, very true. A lighter note, I went to see it with my friend Pam Callow she had a box of Maltesers and during a tense silent scene, can’t recall which one, she dropped them, all you could hear were the Maltesers rolling down the cinema and our giggles, don’t think it went down to well. I recall a Mr Phelps was the owner who we called Mr 4 chins and he also owned another cinema in Billericay called The Ritz, if my memory is correct. He would stand in the foyer as we all went in you could almost read his mind behave you lot. When the show was over the big double side doors would open and the shaft of light that came in was so bright you could not see a thing for a little while.

Later, I suppose around 1965, I remember going to bingo there and winning the £89 Jackpot lots of money then, I know we bought a tent, all the equipment and had a fortnight in Cornwall on it, happy days.

Some of the other memories I have of the Radion are the tasteless popcorn, the soft delicious Walls ice cream tubs with the little wooden spoon, the nuts in shells that made so much mess and the musky smell, all having their own special place in my memory. Add to this my memories of the many boyfriends I went there with, but that’s yet another tale to tell. I hope this helps jog other memories of our Radion.