You are here: HomenextBuildingsnextPlaces of EntertainmentnextWorking in heyday of the reel cinema

Working in heyday of the reel cinema

Life and time of a former projectionist in Laindon 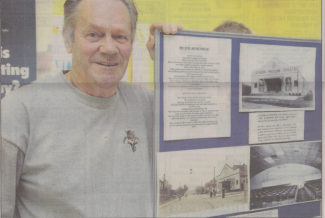 zoom
Flashback - Michael Marchant with some of his pictures of the Radion cinema, where he was a projectionist
Luan Marshall

The projectors in modern cinemas like the Basildon Empire or the Southend Odeon are computers in everything but name. Projectionists need IT skills rather than muscles to do their job. It was different in Michael Marchant’s time.

After he walked out of the projectionist’s booth for the last time in 1969, he earned his living operating heavy-duty equipment for Basildon Council.

Wrestling with the monstrous old-time projectors had prepared him well for the job.

Michael may well be the last surviving professional in south Essex who worked in the days when cinemas had just one screen, and when small town high streets in Laindon, Billericay, Wickford, Pitsea and Rayleigh boasted their own, albeit fading, picture houses.

In his day, the likes of John Wayne, Audrey Hepburn and Peter Sellers still ruled the Box Office and the Carry On films were still carrying on.

Far fewer people had cars then. What they did have were cinemas within walking distance of home.

Michael was a rarity in his time, a young man who wanted to join the projectionist’s trade.

“It didn’t give you much chance for a social life and it could be a lonely old business, shut up in that booth for hours on end,” Michael remembers. But it was the life he had chosen and for a while at least, the life he loved.

Michael was born and raised in Laindon, where he still lives. The older male Marchants delivered coal, although Michael had set his heart on show business. “But that would have meant living away from home,” he says. “Mum didn’t want me to travel. That’s why I went into cinemas. It was my way into showbiz.”

His first break didn’t prove hard to come by. As soon as he left school, in 1956, Michael went and knocked on the door of the Radion. “I said I wanted a job. They said, ‘What, as an usherette?’ I said no, I wanted to work there, up in the projection booth.” The manager, Mr Hay, could hardly believe his luck. The cinema was desperate for projectionists. “If the duty projectionist got ill, they simply had to close the cinema,” recalls Michael.

Michael joined the cinema on January 2 1957. The film showing was the American war movie Away All Boats, starring Jeff Chandler.

Michael took to the trade with no problem. “I picked it up pretty quickly,” he says. “I must have been all right because pretty soon they were letting me do the job on my own.”

The pay was £5 a week, for a six-day week. (The projectionist’s main duty involved changing reels every 20 minutes or so, a job that demanded split-second timing.

This meant being on the lookout for the on-screen cue. He also had I to keep a watching eye on the screen for much of the rest of the time, to ensure focusing and framing were right. “I saw the films over and over again, which I didn’ t really mind. But by the end of the week I was pretty glad of a change,” Michael says. He was also responsible for spooling the films, putting together the trailer and advertisement reels, and overseeing the changeover when new films arrived over the weekend.

If the film severed, it was spliced together – with nail varnish. “It did a very good, very reliable job,” Michael says.

Eventually, Michael fell victim to the projectionist’s occupational disease. “I got depressed,” he says. The shadows of the great movie stars on the screen were no replacement for human company. “I’d leave at night, walk home in the rain, and every one would be in bed. There wasn’t any social life within the cinema. No Christmas party.

“It got to me. So I decided I’d better get married, that would do the trick,” he says. He met his wife, Pauleen, a Wickford girl, on his first blind date. Ironically, their meeting point was outside the old cinema in Wickford.

While some films, notably the Carry On series, were still able to attract a big crowd, audiences were steadily dwindling. This was the era before the age of multiplexes and Pirates of the Caribbean style blockbusters. TV was king. “Sometimes we only had ten people in the cinema,” Michael says. “You felt like just going home. But the show must go on.”

Apart from films, the Radion also did unintended good work as a sort of drop-in centre. “There was one poor old woman, she just didn’t know the time of day,” Michael says. The kindly staff at the Radion would let her come in and watch the films for free. “It was better than her wandering the streets, poor thing,” Michael says. “We used to make her a cup of tea.”

In 1964, Michael gave up full-time work at the cinema, though he continued to help out on occasions. “I didn’t want to leave them in the lurch,” he says.

Then in 1969 the Radion’s owner, former Basildon Council chairman Bert Phelps JP, announced its closure, almost overnight. “It was sad people lost their jobs, but it was really no surprise,” Michael says. “It was obviously losing money. I think Mr Phelps had kept it going as long as he did just out of habit”

The last film run by Michael was Zulu. “I still like that film,” he says. “I watch it every now and then – on DVD of course.”

Michael spent the rest of his working life digging and maintaining roads for Basildon Council.

“I used to get a bit depressed there, sometimes, as well,” he says. “So to cheer myself up, I started to wear an Aussie hat.” The hat attracted a good deal of attention. Some passers-by even asked to photograph him. He might have been sitting in a JCB rather than a projection booth, but Michael Marchant hadn’t said good-bye to showbiz completely.

An original article by Tom King