You are here: HomenextBuildingsnextShopsnextDoris the Hairdresser. 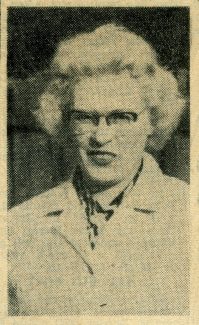 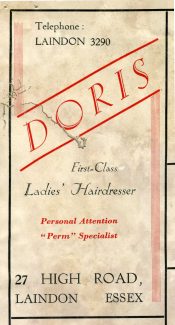 Doris A F Bassett was born 1911 in the Custom House district of West Ham and married Charles H Tranter in 1937.  She was educated at the Freemasons Road School.

Her first job was in a florists shop in Canning Town, while in her spare time she was learning the skills of ladies hairdressing.  Eventually she decided to pursue a career in hairdressing rather than horticulture.  When she was 16 she went into the trade full time and also found time to attend a hairdressing academy in Forest Gate.  She was soon proficient enough to open up her own business in Poplar.  During the nine years she had this business, she took over a second one in Trinity Church.  By a twist of fate, it was the one where she had previously been employed.

After she married, she moved to Plaistow with her husband, still keeping one of her businesses on.  It was when the Blitz became too bad in 1940 that she moved to Laindon and opened a business on the west side of the High Road.

During the war years she arranged the hair of many of the service girls who were stationed in the area.  As well as teaching the trade to young girls, she ‘styled’ a few notabilities.  These included Joan Sims who was attending RADA at the time and Eileen Fowler another local resident of TV fame.

The year 1956 was an unsettled one, as Doris awaited news of whether she would have to move her business to Basildon while really hoping to stay in Laindon if possible.  She had two sisters and a brother also living in Laindon with another brother in South Africa.  Most of the Laindon family were in the furnishing trade except for one of her sisters.  There were two ‘Connies’ working alongside her, known as ‘Big Connie and Little Connie’.  Big Connie was her sister.

I was talking to my own sister recently about our mother’s hair.  During the war, she wore it below shoulder length and rolled it into the popular Victory V style.  During the late forties and early fifties she had regular perms.  The curlers in those days were each attached to a wire, which in turn were connected to a machine.  She had to sit like that while the perm was being processed.  The view through the hairdresser’s window in Laindon High Road must have looked like a scene from ‘The Bride of Frankenstein’.  She would return home with lots of tight little ‘kiss curls’ arranged closely on her head.  After the first wash, it would puff out and for weeks she would pick at it lightly with a comb to try to keep it under control.  It would eventually ‘frizz’ and make her look as if she had seen a ghost.  At that point she would go back to the hairdressers for another perm and start all over again.  In later years, she gave up with perms and went to a hairdresser in the Laindon Centre for a regular cut, shampoo and set, which was much easier for her to manage.

During the sixties mum (Jessica Burton) worked in Green Stores in St Nicholas Parade and I occasionally visited her there on school days during the lunch break. On one occasion when I was about 14 and starting to take an interest in my appearance (which included backcombing my unruly hair to try to make it look trendy), after I had left the shop, one of the young lads who worked there asked my mother ‘who was that’?  Mum replied ‘my daughter’.  He raised one eyebrow and remarked ‘interesting’.  When mum told us about it, my sister couldn’t stop laughing.  I laughed too, slightly embarrassed but secretly pleased that my efforts hadn’t gone unnoticed.