You are here: HomenextBuildingsnextShopsnextGibbs - Ladies Hairdresser 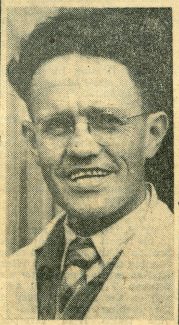 This hairdressers shop was in Dorset Parade, Laindon High Road.  Upon leaving school at the age of 14, George Gibbs started work in his father’s hairdressing business in West Ham.  When he was 16 he enrolled as a founder member of the Eastern Academy of Hairdressing and began hairdressing for himself although still at his father’s shop.  From 1928 to 1940 he never missed a meeting at the Academy and only then because he moved to Laindon when he was bombed out of his home.

In Laindon he took to men’s hairdressing for three years, enrolled and served in the Royal Artillery but was invalided out within 9 months. The artistic side of hairdressing appealed to him so he opened a ladies saloon on the site of his previous business.  It proved a great success, starting with a capacity of five in one room, eventually increasing to 13 after adopting an ‘open plan’ style saloon.

Mr Gibbs only lived in Laindon for two years, as after marrying in 1942, he and his wife moved to Brentwood.  However, he continued his business in Laindon and remained closely involved with the village.  For four years he was a member of the Laindon Chamber of Commerce and from 1951 to 1954 he was Chairman of Laindon Horticultural Society.  In Brentwood he had two acres of garden to attend to although only half was cultivated.  He specialised in fruit and flowers rather than vegetables.

When asked in 1956 whether he would move to Basildon if given the opportunity he replied:  “I can serve the public better in Laindon with more scope to practice, but most regular customers would still come to me for their ‘hair-do’ wherever I was.  I have a regular customer coming from as far away as Colchester for example”.

My first memory of Gibbs hairdressers is having my haircut there a couple of times as a child and hating it.  Mainly because I had thick, tangly, curly hair with sensitive roots which I didn’t like being touched at all.  Later, when I was about 14, I had a razor cut in a bouffant style which needed to be ‘back-combed’ similar to Helen Shapiro’s look.   I found Mr Gibbs and his staff very helpful when it came to trying to achieve the styles of the day.  They were always very pleasant and would even offer a cup of tea while I was sitting under the drier in my rollers.   Later in the sixties I’d moved on to a full fringe, shoulder length style.  In June 1969 I spent most of the morning in there having my hair done for my wedding later that afternoon.  During the 70s and 80s I visited various hairdressers in Basildon but for the last 20 years or so, I’ve had a very nice home hairdresser who comes regularly to my house every five weeks.