You are here: HomenextBuildingsnextShopsnextPelham's Shop 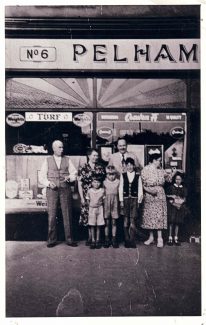 This rare photograph of Pelham’s shop is a sight for sore eyes.  Although it is undated and the people are unnamed, the shop front is instantly recognisable.  The familiar black and white chequered step that led to the front door is just visible on the right of the photo.  Many a time I have walked across that step and opened the door causing the bell to ‘ding’ which in turn summoned Mrs Pelham to appear from behind a curtain that covered the doorway at the back of the shop.  During the fifties, when I was a child, she was usually dressed in dark clothing trimmed with lace.  Small and delicate looking, quiet but with a stern demeanour she served sweets and drinks to us children with immaculate accuracy.  Tipping sweets from their jars into the scales and then into a white paper bag which she twisted by the corners.   My favourites were chocolate buttons, but there weren’t many of them in my 2 ounces for 2d.  I could rarely afford to buy a quarter.  At that time a Wagon Wheel cost 2d, a Milky Way 3d and a Mars Bar 6d.

In the mid fifties I used to take my little brother into the shop in his pushchair to spend our pocket money.  I was rather put out one day when Mrs Pelham told me he was too old to be wheeled into the shop in a pushchair and that I should leave it outside.   He could only have been about 2½ or 3 years old at the most.

I recently contacted my older sister Anne and asked for her memories of Pelhams.  Here is what she told me:-

“What I remember about Pelhams:  There was a Mr Pelham and he died in his sleep. I think that was in the mid 40’s. I remember Nan saying he had said that was how he wanted to go, so he had got his wish.  I don’t know the cause though.  I was taken into the shop as far back as I can remember – Mrs Pelham used to call me ‘little Anne’.   Later on when I was about 8, I used to be given 1 shilling per week and allowed to take my sweet coupon (each person was allowed one coupon a week) where I used to spend it.  I used to get a quarter of sweets and a bar of something, either a Mars or a similar bar called a Crest but it had a white filling.  Mrs Pelham was ‘done’ for rigging her scales on one occasion, when the weights & measures people called in.  I even remember going into the shop and catching her putting some cheap toffees into the jar with the expensive ones.  This explained how it was if I bought a quarter of Merry Maid toffees, which were a nice chocolate coated toffee, I would always find two or three cheap ones in with them ”.

This probably explains the awful toffees that ‘Old Joe’ used to give me when I returned his washing to him once a fortnight.  He was partially sighted and when buying toffees from Pelhams, he was served with the cheapest.  They were horrible and sticky, that is if you could actually get the wrappers off them.  I used to say a polite ‘thank you’ to Joe, but throw them away as soon as I got home.

Pelhams was the first shop in The Broadway (near King Edward Terrace).  Next door going north was Dangerfields the grocers,  then the wood yard (Ashtons).  Next was Variety Stores, The Broadway Radio Service and lastly Express Repair Service (while U wait shoe repairs).

On the south side of Pelhams, was an alley which ran between the shop and the houses.  This led through to Tattenham Road and provided a short cut to the King Edward Estate.  ‘Pelhams Alley’ became a well-known landmark in the area and is still there today, complete with its muddy puddle half way along.

The shop was eventually taken over by Keith Cullis and became known as ‘Keith’s’ and later relocated to the Laindon Centre.  I don’t know what became of Mrs Pelham.  I will do some research – when she first came to Laindon for instance.   I am sure the Archive would like to hear from other people with their memories of Pelhams shop including any information or facts that could be added to its history.  Most of all, the names of the people shown in the photo and if possible, the date it was taken.