You are here: HomenextEventsnextCommunity EventsnextVictoria Park's New Playground and a Walk Around Alexandra Road.

Victoria Park's New Playground and a Walk Around Alexandra Road. 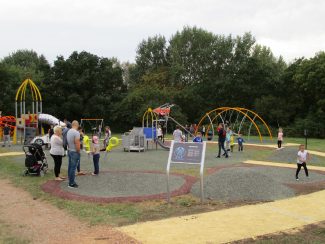 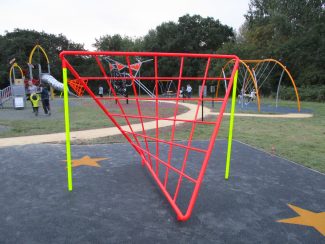 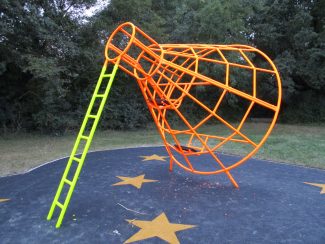 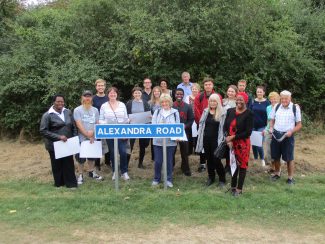 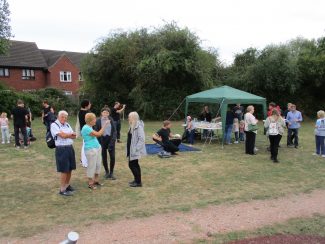 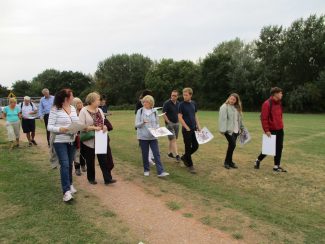 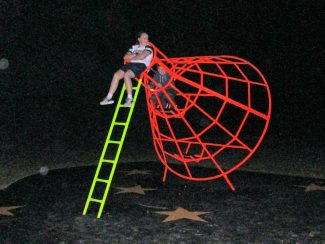 Over a year ago, during a ‘Memory Day’ at Laindon Library, an artist called Shaun Badham introduced himself to the Laindon and District Community Archive. He explained that he was planning a project involving the space age climbing frames in Victoria Park, Laindon.  His aim was to hold an event which, with the backing of the Arts Council, Basildon District Council and local history groups, would include the relaunch of the play area.

As I had grown up in Alexandra Road where my family lived in a plotland bungalow, I was able to provide Shaun with information and photographs from which he produced an excellent map.  He invited me to lead a walk around Alexandra Road as part of the event.  I accepted happily but explained that Alexandra Road had never had a road sign – certainly not in my life time at least.  Shaun very kindly had one made and gained permission from Basildon Council for it to be erected, albeit temporarily just for the event.

The 24th September brought a beautiful Autumn day and a large gathering of adults and children assembled at 5 pm at the play area.  The new climbing frames were already in use and proving popular.  Shaun had painted the original ‘space age’ frames in black light fluorescent paint, which glows under UV light.  A ‘meet and greet’ gazebo had been erected within which a refreshments table was laid with sandwiches, snacks and soft drinks.  At 5:30 Shaun called to all those who wished to go on the walk.  About twenty people took up the offer and armed with the maps we set off.

Although there isn’t an awful lot left to see in the area, apart from two wells, part of an old farm gatepost, an electrity pole and some rubbly brick remains of a bungalow deep in the undergrowth, the group was extremely interested in its history.  With the aid of the map I was able to point out where the farmhouse and each of the plotland bungalows had once stood and told a few stories of the families who had lived there and how their homes were eventually compulsory purchased by the Basildon Development Corporation.

Many interesting questions were asked.  One lady asked about the winter months and I told her how cold it had been without central heating or double glazing and how we used hot water bottles and piled blankets and even rugs on our beds to keep warm.  I also described how wet and horribly muddy the unmade road became at certain times of year.  She listened in fascination and then remarked ‘I wonder how today’s youngsters would cope with that way of life, if they were suddenly transported back in time?’ We arrived back at the climbing frames at 6:25 which was almost perfect timing for an hour’s walk.  Several people came up to thank me for the walk and said they found the area’s history very interesting.

We made our way to King Edward Road Community Centre where Shaun had set out some artwork, maps, books, a merchandise table and provided some welcome drinks and snacks.  A very pleasant couple of hours were spent chatting and looking around.  At 9 pm, armed with UV torches, we made our way back to Victoria Park.  Aiming the torch beams at the painted frames, we made them glow in the dark.  A most pleasing finish to a very pleasant afternoon and beautiful Autumn evening.

The map of the walk, plus some photographs of the event are on display on the wall in Laindon Library.