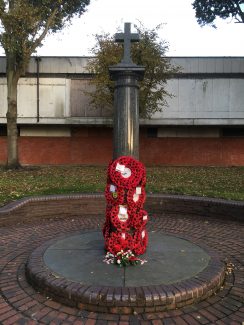 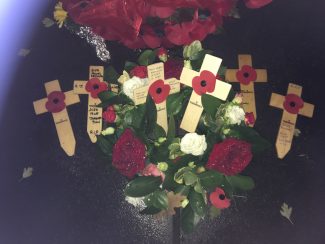 Unlike other remembrance Sundays, the service at the Laindon War Memorial is held every year at 3pm and this year was no exception. Over the last few years it is pleasing to note that numbers have increased considerable and there must have been around 70 people this year. If this continues and let’s hope it does, we will next year consider refreshments after this short service that lasts for about 20 minutes.

With this number of people, there were more poppy wreaths than there has been in the past and if you walk or drive passed, you will see that they have been neatly tied up around the memorial.

Soon after people had left and as the organisers were sorting out the wreaths, there was a pleasant surprise when a young lady turn up with a beautiful home made wreath, laid it with a smile, got back in her car and drove off.