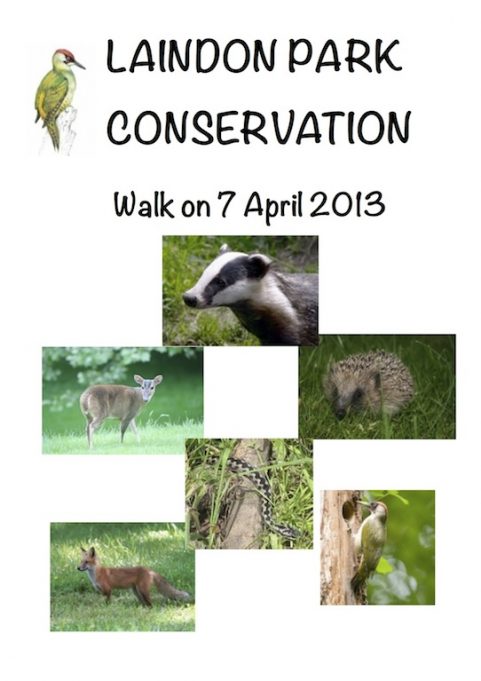 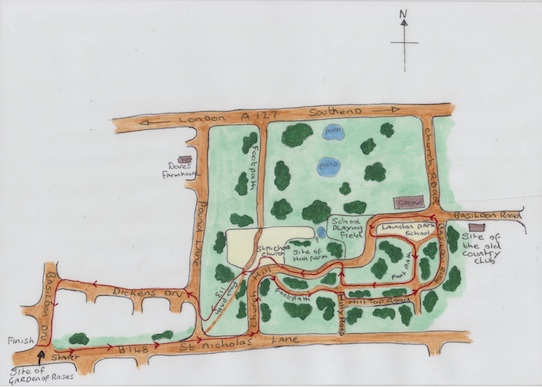 The walk started at the bottom of Church Hill at lunch time in near perfect spring time weather conditions. The Laindon Park Conservation group was led by Phil one of the original  members that set up the band of like minded people way back in 1998. They have been working tirelessly on the whole area surrounding the church over the years clearing paths, laying hedges, putting in marker posts and information boards so people can enjoy their local open spaces. They are helped by Community Pay Back Volunteers who add a great deal using skills they have learned over the time spent doing such valuable work in the area.

With a group of 13 walkers we set off on our walk on the east side of Church hill on the  newly created Fox View foot path winding our merry muddy way along the small well kept paths. With the blossom just emerging on the bushes and brave daffodils at last showing their brilliant heads amongst the grass it was hard to believe we were so close to the habitation just a few short yards away beside St. Nicholas Lane.

Crossing a large swathe of short grass south of the church reveals a great vista of St. Nicholas Church in all of its glory high above  silhouetted against the sky. Most people must often miss this imposing sight emerging between the trees and bushes driving along the roadway.

We turned eastward onto another path called Blossom Hill, Phil gave us a lot of information on the work they continue to do throughout the woodland and also pointing out where bungalows used to be.

Barry another member of the group prepared notes and photographs (many of which he has taken over the years) for the handouts given to us beforehand so we could follow the information given on the walk.

We then reached the junction with Hilly Road, an original road sign still exists on the north side of St. Nicholas Lane nearly opposite Ballards Walk. Details of articles found or unearthed during their forays into the shrubbery over the years was interesting. We were shown the old paths laid by the owners of the properties that formed the plot land areas.

We were kindly treated to a drink at a welcoming “camp” along the pathway manned by more of the volunteers. The path eventually led onto Church Hill beside Laindon Park School which was built in 1877 Walking along the roadway various sites were pointed out, one of which was where Laindon Hall was situated before being  burned down in 1964. We then continued up the road towards the church where we wandered around the church yard taking in the whole 360 degree view of this special precious corner of our community. Hopefully with this special band of caring folk we can keep what is a vital piece of our heritage for the future generations. 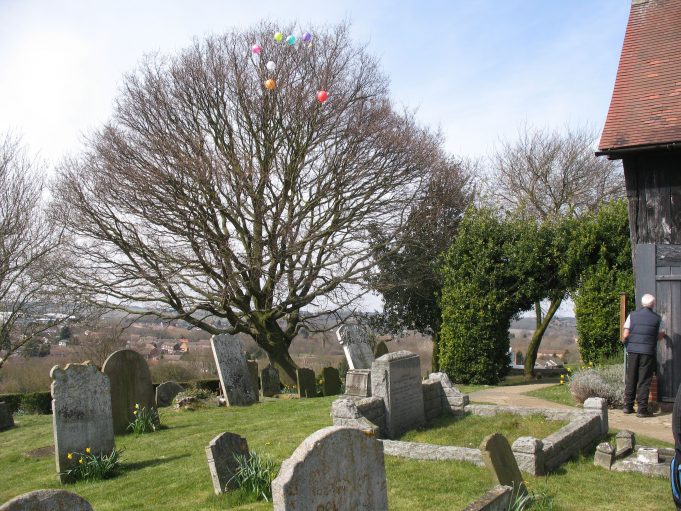 Some more pictures from the walk, including a loverly Ash tree that provides habitat for wild life and a much needed windy break for the Church

By Patsy and Ian Mott