Held at the Dunton Visitors Centre of the Essex Wildlife Trust 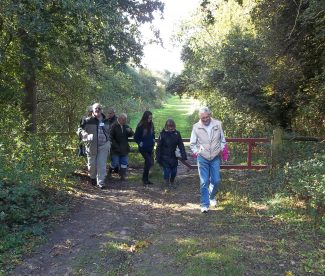 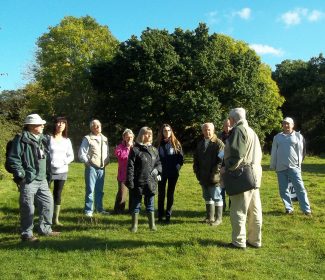 zoom
The group at the top of First Avenue
Nina Humphrey 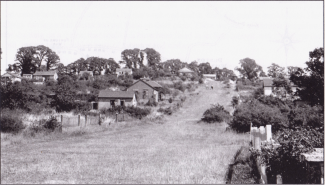 To help promote the memory walk taken by Ian around plotlands we were asked to take the Archive picture gallery and some merchandise to the centre. The morning started slowly with a small number of visitors coming into see the display in the classroom. We did well with donations and the sale of calendars and cards. As the day progressed a steady trickle of visitors came in. The weather was sunny and calm perfect for the plotland stroll, Nina and Colin together with two of the visitors and Jennifer Shirley from the centre joined Ian at 13:30. Later during the afternoon Ken arrived

I had the pleasure of leading the fourth memory walk in ideal dry and sunny conditions which, when walking around the avenues forming the Dunton Plotlands is an advantage. The eleven of us forming the group set off promptly at 13:30 from the Visitors Centre  located at the bottom of the third Avenue.

As we walked up to the start of the track to Forth Avenue I pointed out that the centre was built on the garden of “St James“ the residence of the Winkworth family. Mr Winkworth was a master bricklayer by trade and a keen ferreter. By the time I had finished talking we had arrived at Fourth Avenue, having passed through Mott’s acre which formed part of the garden to my home “Mon Ami” from 1952 to 1966, when I got married. Without me realising it we had passed through the area that my parents and I had spent years keeping clear to provide food for the animals we had kept, was now overgrown.

At the point where we were standing in Fourth Avenue were some of the pot tile beams that had been put down by the residents to try and improve winter access, but from memory this was only partially successful. Looking up the avenue towards the climb to Hill Crest all you see now are trees and in order to give an idea of how it has changed I provided the following photograph (from Alan Young’s book Down the Line) which clearly shows the number of homes that existed in the 1950s.

We proceeded to make our way up to Hill Crest and at the junction we looked westward. The growth of the trees and scrub did not allow us to get an idea of the view towards London that the residents had enjoyed from their Hill Crest homes. I indicated where Hill Crest had continued in a southerly direction down what was locally known as the Dip and I recalled a couple of reminiscences of two families who had lived down the the Dip.

We then made our way to the top of First Avenue taking about various families who had lived and pointing out where various properties had existed. But again the views to the West are now limited by the uncontrolled growth of trees and scrub across the avenue. In the 50s the only obstruction to the view were a row of majestic Elm trees, lost to Dutch Elm disease, that use to mark the line of a sudden steepening of the slope at the foot of the hill.

On reaching the bottom of First Avenue I reminisced about the Simmon’s and Bonnett families and the disaster that had befell the families during WWII, when Mrs Simmon’s had been killed. We then made our way through the track way, that linked the avenues, to Second Avenue. While walking through to Second Avenue we noted a large reinforced concrete post which was out of keeping to the general type of construction in the area and could well have been associated with wartime structures in the area. I would add at this point that when I lived in the area I had not known that this existed, which is not surprising as very little of this track way was accessible having been incorporated in the adjoining properties.

We made our way up Second Avenue stopping to look and discuss the area that had been occupied by a squatter after the Corporation had finished their destruction of the community. On reaching Hill Crest again two of the group who had only joined us as the result of an off chance visit to the Centre. We then made our way towards Third Avenue and making a detour into the garden that use to be “Hawthorn” the home of the Burke family. We where rewarded with an insight into the view to the West that the original residents had of London with all the major new buildings clearly visible.  The current structures in London obscure the view of buildings such as St Paul’s Cathedral that I remember from my child hood but never the less it still shows the magnificent panorama that the residents enjoyed.  I pondered on how the war time residents must have felt looking at the glow and smoke of the fires resulting from the bombing of London, thinking of the friends and family that many of them had left behind when they moved to Dunton.
While at the site of “Hawthorn” a mother and two children came in and was showing them the out line of the building and I was able to show them a photograph of the house taken from the veranda of “Trees”.

We then made our way down Third Avenue making a detour into the site of “Trees” where Mr Berninham had lived. The paths are still intact and the location of the substantial wooden bungalow is still clearly visible.  The groups discussion moved to what had been lost with the clearance of the properties by the Corporation leaving just the “Haven” as an example of the type of properties that made up Dunton Plotlands. They would have given a far better insight to the way the plotlanders had developed the area against the odds by leaving three or four of the properties that made up Third Avenue.

We returned to the Visitors Centre at about 3:40 and were preparing to finish when I was asked to just take them along Lower Dunton Road. This was to show the remaining members of the group properties I had talked about during the walk. We returned to the Centre just in time for me to collect Patsy and the packed up Archive materials.

By Patsy and Ian Mott