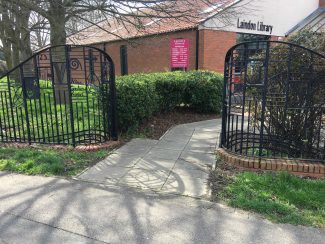 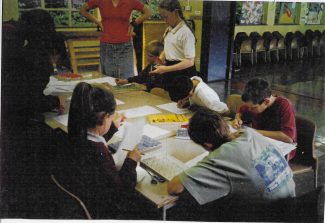 zoom
Children working on the design 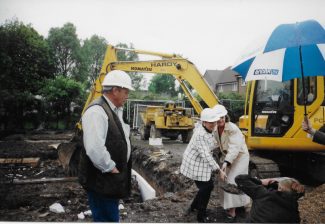 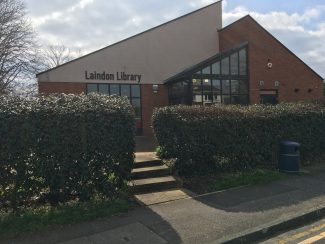 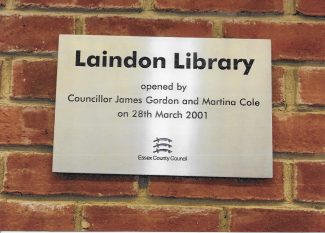 I just wonder how many of you have really taken any notice of the Gates to Laindon Library. As they are never closed it is possible you may not have noticed them. I had not until recently.
The previous library had been in the Laindon Shopping Centre and had opened there in 1969 and If you want to know a little more about the previous history of the Laindon Libraries suggest you link into Mary Cole’s article “Laindon Libraries – The Beginning”.
Work on the current Library started back in April 2000 and our local MP Teresa Gorman turned over the first piece of earth. It cost in the region of £470,000. The Essex County Council commissioned artist Rachel Johnston to design some public art for the new library which would involve the community and enhance the environment. Rachel worked with children from three local schools – Bluehouse Junior School (now Phoenix), Mill house Junior School and Laindon Park Primary School.
Rachel designed the railings working from the ideas generated by the pupils and as Rachel said: “The railings are unusual and very distinct. I have tried to create a theme showing the function of the library with drawings of book and letters”.
Denise Rowling who had been the manager of Laindon Library since 1989 said: “It is magnificent and looks grand. It makes the library stand out from other buildings.” (Denise though now retired is a member of the Laindon Archive Group and the Basildon Borough Heritage Society).
The Library was officially opened by Councillor James Gordon and Martina Cole on 28th March 2001. So, when you are next in the area why not stop and have a look, I think you will be impressed