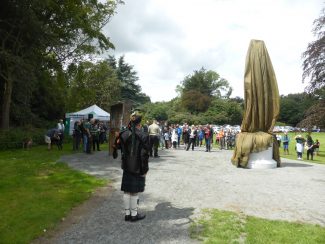 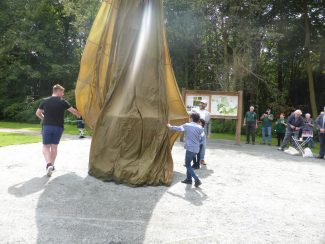 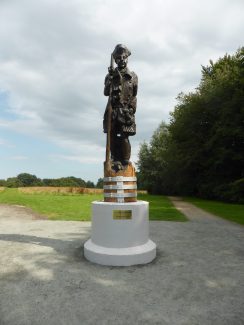 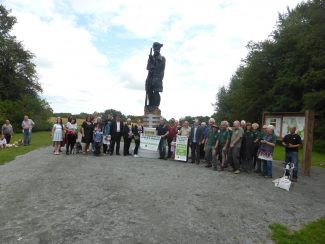 The Woodsman comes home
Who remembers the Woodsman that stood in St Martin’s Square, Basildon town center for over a decade. It was carved by Dave Chapple local sculptor and Essex artist from a fallen oak tree in the hurricane of 1987 from Langdon Hills Country Park.

It was erected in 1996 but unfortunately it was not properly maintained and in 2008 it was removed initial to Wat Tyler Park with the intention of it being restored and put on display there.

Nick Stanley the warden of the Langdon Hills Country Park and the Friends of Langdon Hills Country Park arranged for it to be brought back to the yard at the park for safe storage and restoration, out of respect for Dave who had built various carvings in the park, such as a snake, mouse and Saxon head. They spent several years fund raising and slowly restoring the woodsman to its formal glory.

It was finally erected and covered near the car park at Westley Heights, Langdon Hills, in July 2021. On the 31st July following the bagpipes, Dave Chapple’s son Dean and family in front of a very large crowd unveiled the 15ft statue. In attendance was Stephen Metcalfe M.P., Mayor of Thurrock, Sue Shinnick, Basildon Deputy Mayor, Luke Mackenzie and local councillor Chris Allen.

The weather was kind and it turned out to be very pleasant afternoon with free refreshments provided by the Friends of Langdon Hills Country Park.

The Woodsman now stands majestically in its rightfully place close to where the Old Oak finally fell down.

To view a video of the event click on this link.

Through the mist of time in Langdon Hills
There grew a mighty oak,
Its sturdy branches reached the sun,
Tended by woodland folk.

But in the storm of ‘87
This oak came crashing down,
And there it lay on the forest floor
Until, one day, it was found

So, Dave Chapple worked his magic
On the trunk of this ancient tree,
And a woodsman did appear
From the seventeenth century.

A tall, imposing figure,
A character of note!
With creatures of the woodland
Nestling ‘neath his coat.

For many years this woodsman
Adorned St Martin’s Square,
But the weather took its toll
Destroying what was there.

So, the ‘Friends’ donated money
For him to be restored,
Now he stands in Westley Heights
Proudly viewed by all.