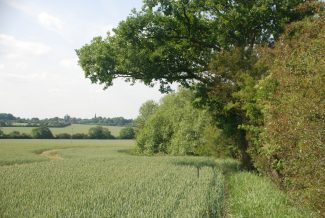 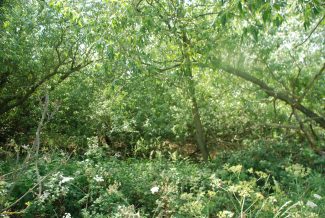 zoom
The Pond is at dry due to the lack of rain and improved field drainage. The pond would have been about 8 to 10 feet deep.
Ian Mott 14 June 2011 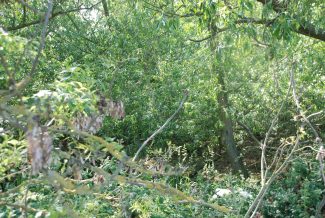 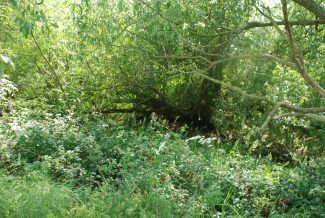 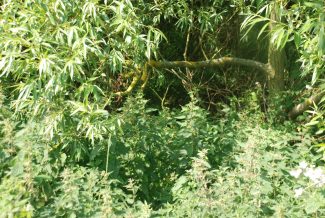 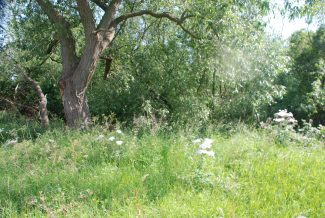 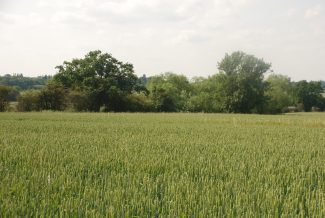 A consistent claim made by contributors to this web site is that the pre Basildon New Town Laindon, Langdon Hills, Lee Chapel and Dunton was a remarkably safe place for children in which to grow up. The miles of roads along which it was possible to drive motor vehicles in very dry weather and only then with considerable care meant that on only a few routes was there any risk of a traffic accident. In any case, car ownership was for most people, an as yet unfulfilled dream.

Because, pre New Town, the whole area had originally been little more than a widely scattered collection of small farms, development in the first half of the twentieth century meant that there were often extensive parts where, in the absence of a dwelling or similar construct, to all intents and purposes there was just a wilderness. In such places, Nature, being unchallenged by human effort, was constantly doing its best to reassert its own priorities over what had once been well cultivated fields. The coming of the planners, after 1948, intent on replacing this rural idyll with as much concrete, brick and tarmac as they could, chose to dub the area a “rural slum”.

In that pre Basildon New Town era, the freedom afforded by so many parents to their children, which allowed them to wander free at will, meant they could participate in activities that were neither strictly urban nor rural. Probably one of the most popular activities was the making of a “den”, a device that could serve equally well as a “camp” or a “house”. There was even, at the right time of year, free refreshment to be had. In many places people who had bought plots of land as an investment or speculatively with an eye on some the future project, had also planted their ground with fruit trees. Subsequently neglected, such orchards offered the chance of the gathering of fruit, which would, otherwise, had lain and rotted away.

Laindon, in particular, was regarded by many as the blackberry capital of Essex, Brambles grew everywhere and such was the area’s reputation that people from well outside the district would arrive at the appropriate season to take away the free harvest, well aware that it could not have been tainted by the exhausts of any passing motor vehicles. In like manner, Langdon Hills was renowned for the visual appeal of its bluebells in spring, an attraction that brought visitors for the spectacle and also, regrettably, to gather. For some reason, never quite explained, some people used to think it a good idea of collect large bunches of these extremely delicate blooms, lash them to the carrier behind the seat of their bicycles, then hurtle down High Road, Langdon Hills, shedding the plants over the road’s surface as they went, presumably in the vain hope that they would reach home before all the flowers faded. Luckily, a more responsible attitude has now seeped into the public consciousness.

There is a saving grace, in one sense, that the New Town has, so far, managed to preserve a fringe that serves as a reminder of the ecological background that was once widely available to the residents of Laindon, Langdon Hills, Lee Chapel and Dunton, young and old alike. But the present day residents need to be constantly on their guard. These remaining patches of Woodland, which, in some places, have been “improved” by the removal of the settlers of the past, remain under threat in the face of the relentless pressure for housing from the London area.

Although the picture painted in this article is one in which the younger generation were able to grow up in what appears to be a carefree Arcadian environment safe from many of the hazards that confront children today, all was not necessarily free from risk. Quite apart from the dangers of falling out of a tree of which there many hundreds of scaleable examples, there was, strangely for a renowned “dry” region, the danger associated with water. Pre-New Town, there was a plethora of ponds throughout the district, the legacy of fairly widespread stock husbandry as well as a source of domestic water for the farms’ households. Yet, from the point of view of juvenile activity, the hardest thing to do was to learn to swim. Being static water, none of the ponds in the district lent selves to being a suitable location to tackle the task. The River Crouch is still in its infancy until well beyond Wickford and was, in any case, tidal east of Battlesbridge with a strong undertow on the ebbing tide.

None of the schools of the day could afford to equip themselves with suitable learning pools and the nearest public facilities were at either at Brentwood or Westcliff, both of which locations being only open-air with no heating which meant they were not exactly conducive to the sort of experience that is necessary for non-swimmers to gain a healthy respect for water and to master the skill of swimming. Pitsea did have a rudimentary lido fed with water from the creek which had similar draw backs to the public facilities mentioned previously, namely using it generally called for nice warm weather.

In the month of January, 1941, one of the drawbacks of giving the children of Laindon and district the freedom to roam with few constraints was driven home for at least two families. It maybe that the familiarity of the district’s reputation for being safe had bred some complicity, but during the Christmas/ New Year school holiday two little boys from the Flint family living in Martindale Avenue, off Wash Road, accompanied by their friend Tony Matthews (thought to live in Waverley Road) decided to pay a visit to a local spot called “Twelve-trees Pond”. The Flint boys were seven and five years old and, Tony Matthews, just a little bit older.

The two Flint boys had been expressly told never to visit Twelve-trees pond that was, and still is, about half a mile from Martindale Avenue and, being part of Mundel’s Farm in Wash Road, was only reached across several fields and well away from the beaten track. Geographically, it is actually in the parish of Great Burstead and young boys being what they are and having a great fascination for water, ignored their mother’s instructions and paid the pond a visit “looking for tadpoles”. It was a fatal decision because somehow all three boys slid into what must have been cold water given the time of year. None of the boys could swim and the two Flint boys drowned in what was later said to be ten feet of water.

Tony Matthews came close to drowning himself but managed to pull himself from the water and, being unable to assist his companions, ran across the field for the other boys’ mother who immediately herself ran back across the field to the pond. But it was too late and the bodies of her two boys were only recovered later by the police when they dragged the bottom of the pond.

Poor Tony Matthews had later to endure the task of appearing as the only witness of the tragedy at the Inquest  held at Billericay when a verdict of “death by drowning” was returned on the two Flint boys. One wonders what lasting effect these traumatic experiences must have had on his later life.

Whether or not the incident just described influenced later decisions, in June of the same year (1941), the Laindon Athletics Club announced that they intended to introduce swimming classes into their Sunday morning’s list of activities for which an instructress was sought. They invited new members of either sex aged between fourteen and twenty years of age to join in order to participate. It is not clear if this move links in any way to another incident a bare month later in July 1942, when the “Recorder” reports the funeral at St Nicholas Church, Laindon, after another inquest at Billericay had  returned a verdict of “death by drowning” on Sidney Winsbury, aged eighteen, of “Tourney”, Bracken Mount, Laindon.

It would appear that Sidney’s father had told the Coroner that his son had gone with others in a party to Pitsea Creek with the express intention of learning to swim. Another witness, Robert Rumble of “Morningside”, Cambridge Road, told the Coroner at Billericay that, while he was not actually, part of this party, he had swum across the creek at Pitsea and, turning, had watched the efforts of the others when he saw Sidney floundering and in obvious difficulties. He had swum back to try and help but when he reached the learner, the boy had disappeared from view. Police Constable Hancock gave evidence that at the spot where the tragedy had taken place, while the average depth of the water in the creek was only five feet, there was a deeper channel known as “The Cut” which people knew to avoid because of the fast undertow in ten feet of water. It was from here that later in the day Sidney’s body was recovered by another swimmer.

After this incident, no further trace has been found relating to swimming until the arrival of Basildon New Town with its purose built pools and schools with their own facilities which go some way to solving the difficulties experienced by the district’s older generations.