Memories of Motorbikes and other Vehicles 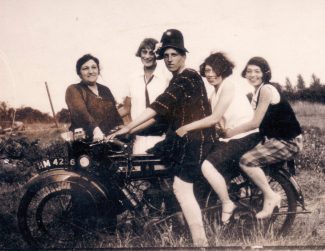 zoom
My dad on his motorbike in Laindon approximately 1928. 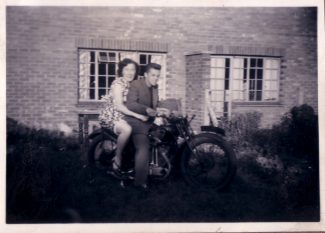 zoom
Mystery photo taken in the early fifties in Powell Road. Any ideas as to who they were would be very welcome. 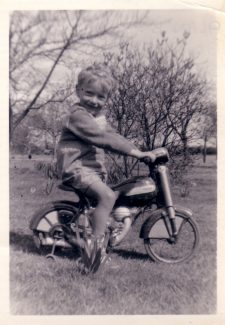 zoom
They started young in my family. My brother Alan on his Mobo in the garden of Spion Kop 1953. 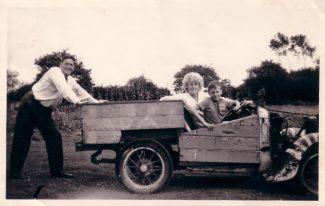 zoom
Our old jalope 'Ada' in the garden of Spion Kop 1962. My dad, George Burton, me and my brother Alan. 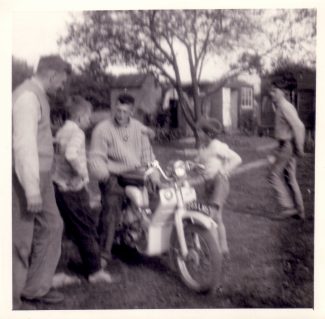 zoom
My brother Alan's first motorbike although it would be another four years before he could ride it on the roads. My dad on the left. Big brother Dennis sitting on the bike, Alan between them, Dennis's son Paul on the right. Neighbour, Norman Whitehead on extreme right. 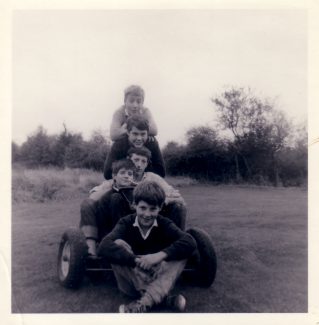 zoom
Our go-cart, made by my brother Dennis. From bottom. Martin Burton, Paul Burton, Alan Burton and friends Ray Thomas from Bourne Close and David Whitelock from the Kathleen Ferrier estate. 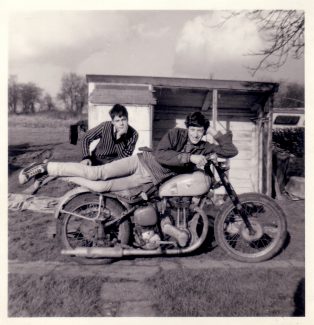 zoom
Waiting patiently - Alan aged 15 with friend Ray Thomas. One more year to go - it will be worth it. That's Alan's budgerigar avery behind them. 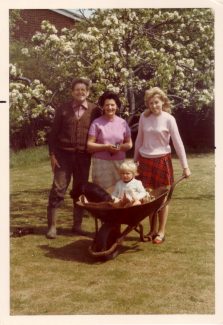 zoom
Transport of a different kind 1973. My mum and dad, George and Jessica Burton. Me with my son Mark in the garden of Spion Kop with Ian and Patsy Mott's son's house in Bourne Avenue just visible in the background. 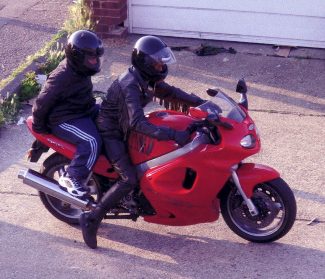 zoom
My nephew Paul Burton on his Triumph with a small pillion passenger 2005. 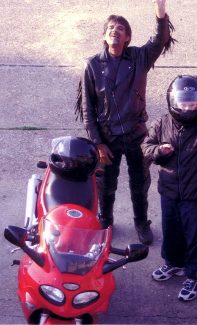 Motorbikes have featured in our family since as long ago as around 1928 when my father George Burton came down from London at weekends to stay at ‘Spion Kop’, the family’s plotland bungalow in Alexandra Road, the unmade part of King Edward Road. They had owned the plot since 1915. I have a treasured photograph of my ‘young’ dad on his first motorbike in the front garden, with his mother, Amy Burton and some other female relatives. I am not sure what they were doing, but it looks like a lot of fun. He also got his first car and driving licence while he was very young without having to pass the driving test, which I believe, didn’t came in until around 1937. He once told me that he couldn’t get his car up Crown Hill as the petrol would run out of the tank, so he had to turn the car round and reverse it to the top.

My older brother Dennis had a bright blue Douglas when he was in his late teens - his pride and joy. He started his National Service in 1948 and became a motorbike despatch rider in Germany, which suited him perfectly. On his return, he often went scrambling and dirt track racing with many of his friends, Bobby Richardson and Ronny Graves to name just two. I was only about 4 years old at that time and when I asked him where he was going, his answer confused me:  “Dirt track at Grays”. I didn’t know what he was talking about but it sounded like a murky uninviting place to me. He gave me a pillion ride once but I didn’t like it much. He could reel off a list of names of the famous bikers of the day, (Barry Briggs comes to mind), their machines and achievements because he was a terrific fan. His garage was an old air raid shelter in our garden known as the engine shed. He kept his bike in there, also a wind up record player with a stack of 78” records and a couple of deckchairs – a proper young man’s den. On one occasion, I ran in to see him, jumped into one of the deckchairs and heard a CRACK.  He shouted “Now look what you’ve done”. I had landed on one of his 78s and broken it in half. On another occasion when he has home on leave during the National Service, I woke him one morning by playing my music box close to his ear when he was having a lie in. His response was to shout to our mum “Get her out of here, I was trying to sleep”. Poor Den, I seem to have caused him plenty of annoyance when I was 4 years old. On reflection, in a deckchair was rather an unwise place to put a 78″ record. In the summer of 1951, he brought his future wife home to meet us, transported of course, on the back of his motorbike. After they married, their first family vehicle was a motorbike and sidecar combination. They progressed to a Bedford Dormobile, a Landrover and eventually a conventional four door saloon.

We didn’t have a car during my childhood, we rode pushbikes.  I travelled around on a little seat fitted to the back of my dad’s bike until I was old enough to ride one myself. My dad’s biking ‘uniform’ was cloth cap, gabardine mac and bicycle clips to stop his trouser legs flapping about. He rode in all weathers, often arriving home soaking wet and I can still remember the damp smell of his wet clothes as they hung drying in the kitchen. When my little brother Alan started school in 1956, he rode his bike along side my mum on hers, to and from Markhams Chase. One afternoon we were walking up King Edward Road on the way home from school, his PE kit was hanging from the front handlebar. He was riding very slowly in front of mum and myself, keeping pace, when the bag caught in the wheel and jammed causing the back wheel to tip up and throw him sharply over the handlebars onto the pavement in front with a crash, showing you don’t have to be going very fast to have an accident. It was quite a shock but although winded, thankfully he wasn’t badly hurt.

Mud was a big problem for Laindon bike riders in wintertime. With so many unmade roads, even mudguards became clogged up.  I remember having to dig mud out with a stick from under the mudguards of my little pushbike and woe betide anyone standing behind a motorbike that had got stuck in the mud because revving the engine could send the back wheel spinning, sending a spray of muddy slush high in the air, covering anyone in the vicinity.

Around 1960 my mum decided to learn to drive. She was enthusiastic and her son-in-law gave her a few lessons before she booked up with BSM. She bought a second-hand Morris, which she kept alongside our bungalow ready for when she passed her test.  She passed on her second attempt and loved driving around the village, although she needed to ‘double de clutch’ in the old style Morris. My dad didn’t drive again, he left that to my mum as she enjoyed it so much. Except on just one occasion when I was about 15. It was pouring heavily with rain when I came out from school at lunchtime, and was surprised to see him waiting at the school gates for me in the Morris. He drove me and our neighbour Norman Whitehead home to Alexandra Road. He was a bit rusty and graunched the gears once or twice, but we were very grateful as it saved us both from a thorough soaking. Mum later changed the Morris for a Ford Anglia which she drove for many years.

My sister and her husband were speedway fans. They took me to a few meets at Rayleigh Stadium to watch Rayleigh Rockets compete against Poole Pirates. Those events were extremely popular and very well attended. Rayleigh Rockets won most races, but Poole Pirates kept coming in second and third, thereby scoring more points and became the overall winners. In 1960, they took me to the Speedway World Championships at Wembley. It took ages to get there, as prior to the M25 being built, we had to travel via the North Circular. It was a very exciting evening. We watched as Sweden’s Ove Fundin received the cup. Amazingly, he had won the championship with a broken ankle strapped up tightly throughout the evening! Our own Peter Craven finished in third place.

My younger brother Alan got his first proper motorbike in 1968 when he was 16 and travelled to school on it during his last year at Laindon High Road School. That wasn’t unusual, as throughout my time at the school 1957–1962 there had always been a few motorcycles parked in the bike sheds belonging to boys in the 5th year. At age 16, a bike and an ‘L’ plate was all you needed and off you went.  When he was 17 he took and passed his motorcycle driving test - from then on he was able to have a pillion passenger.  The following year he passed his car driving test without having lessons with a driving school.   He applied for the driving test, put an L plate on our mother’s Ford Anglia and drove around with her accompanying him while he waited to be given a test date. It didn’t take long and he took the test in mum’s car and passed first time.

Alan and his friends often worked on old bikes in our garden, motorbikes, scooters, mopeds etc, got them going and drove them around the fields just for fun. (I did too sometimes, although never on the roads). He and his friends often tinkered about, helping each other with their machines, doing maintenance and repairs. Sometimes when I asked them what they were doing, they teased me and made me laugh by saying things like “We’re taking Geoff’s head off” or “We’re greasing Paul’s nipples”. Alan also acted as ‘mechanic’ to a friend of his who sometimes practised at Rayleigh Speedway Stadium. He and his friends used their motorbikes for several years to travel to and from work and I don’t blame them, as it was far more economical than running a car. The last machine he owned was in the early eighties, an old British make, BSA I believe.

I heard a story recently about a friend of my younger brother, known as ‘Chalky’ White (can’t remember his first name) who lived in Devonshire Road and made bespoke specials with very tall handlebars. Sadly, he died just a few years ago while still only in his fifties and at his funeral, all the guys on their specials turned up and parked in a line as a mark of respect.

I was never part of a motorbike crowd myself, but I have a great affection for them as they featured in my early life and there always seemed to be several in our garden in Laindon. I’m one of a dying breed who never learned to drive. I’ve never minded walking or taking a bus and better still, I’m more than happy to be chauffeured around by my husband. I’ve no regrets at all, especially when I see some of the things he has to contend with on today’s busy roads.

Dennis’ oldest son Paul was also a biker and had a bright red Triumph Sprint ST9551, which he rode from Dunton to Harwich in September 2005, an annual event to raise money for the Essex Air Ambulance. He had recently passed his advanced proficiency motorcycle driving test. Sadly, he was very ill at that time and passed away a couple of months later aged 53, so was unable to repeat his participation in the event which still takes place each year. His father (my older brother Dennis), sadly passed away in May 2010.  My fondest memories of them both with always include motorbikes.