These are Dave Peck's recollections of his time in Laindon

With his parents, older sister and younger brother, Dave moved to Laindon from London in 1951 to a bungalow called “Cotswold” in Buller Road. This house was later demolished to make way for the new houses that were built when Devonshire Road was further developed and extended southwards in the 1950s’. 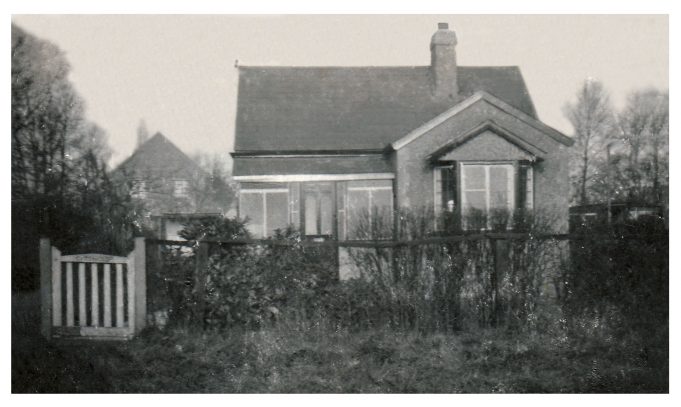 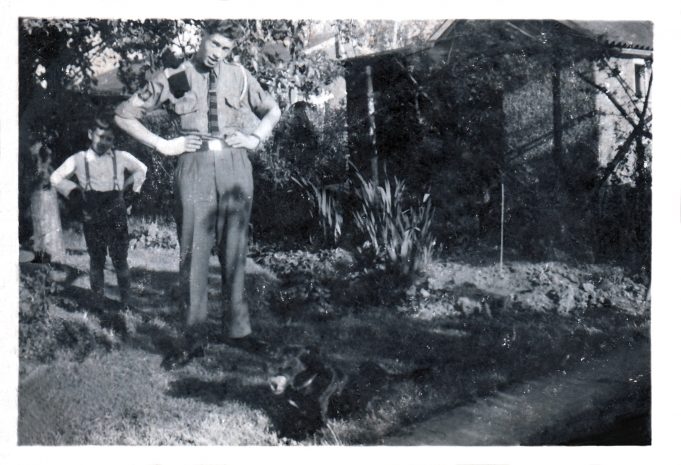 Dave and his younger brother in the back garden

Being a new boy on the block and being encouraged by school friend Donald Tyler he joined the Laindon Division of the St. John Amulance Brigade in 1952. 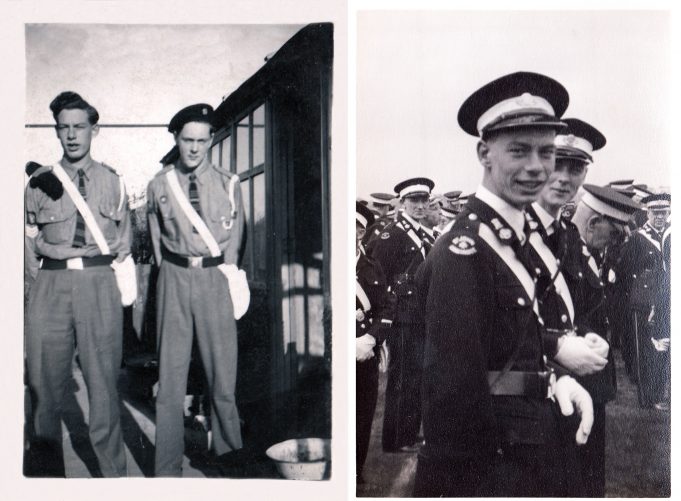 With many other young like minded people from the area they were kept busy at the St. John Ambulance Headquarters on the A127 Arterial Road  on the London bound  side west of The Fortune of War roundabout. Dave left Laindon School in 1953 but continued involvement in his love of first aid throughout his life. 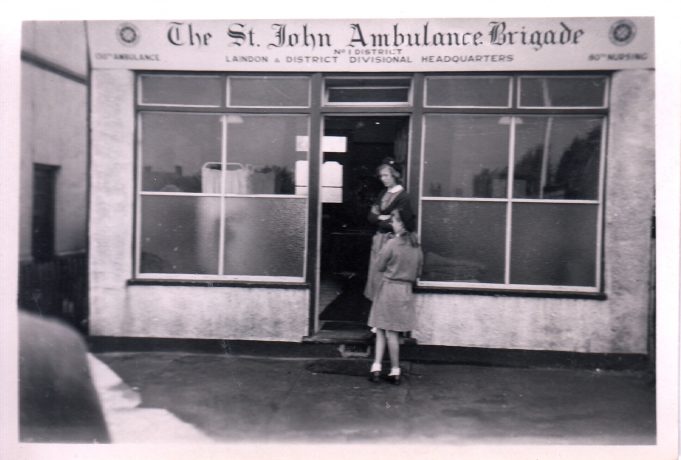 Laindon & District Headquarters on south side of Southend Arterial Rd (A127) 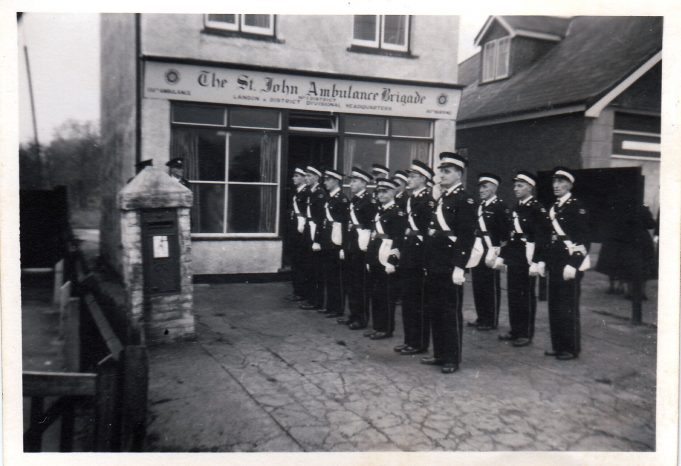 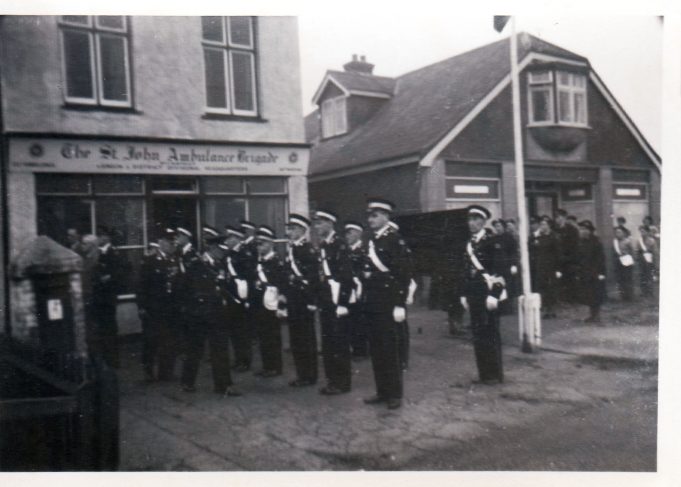 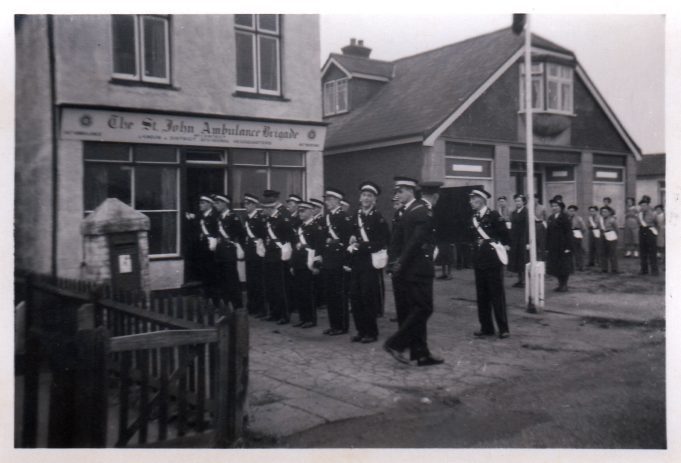 Many cadets from Laindon and the surrounding areas joined other cadets from around the world at the Stubbers Summer Camp in Ockendon in 1953. 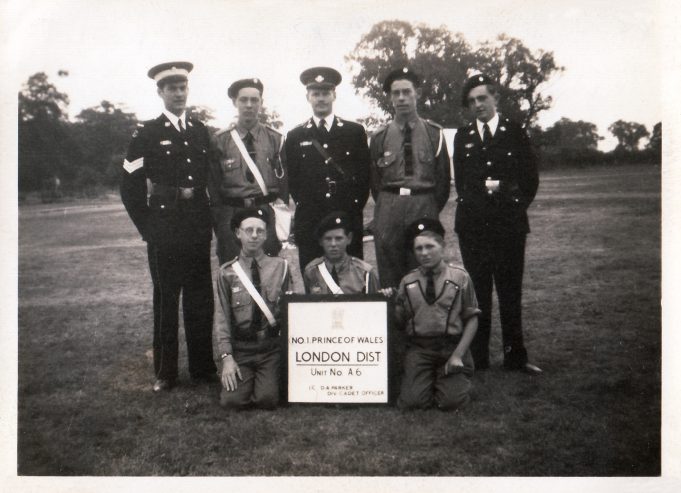 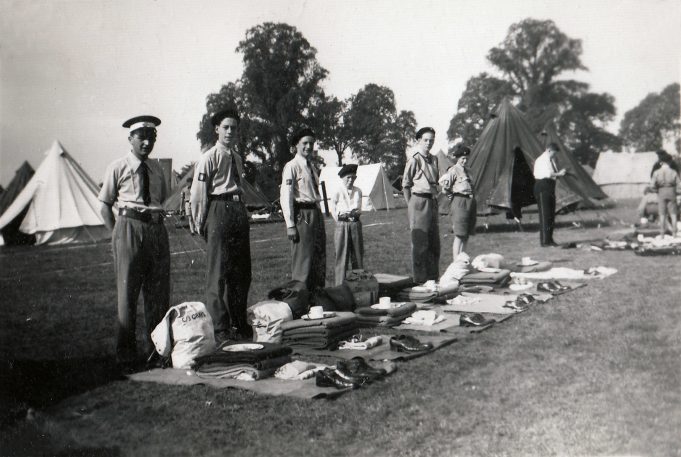 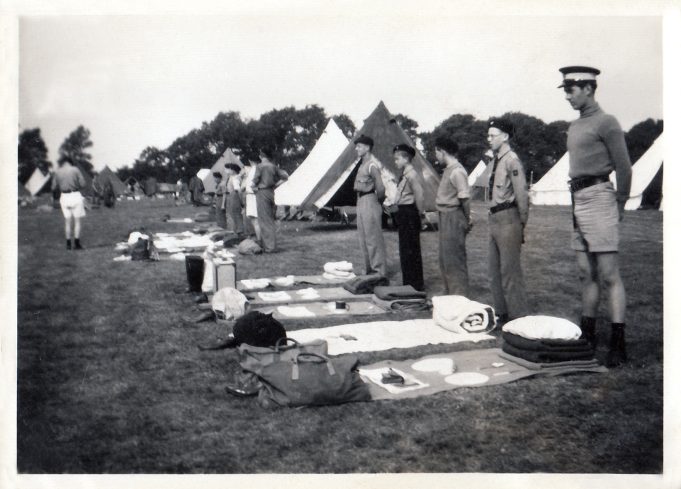 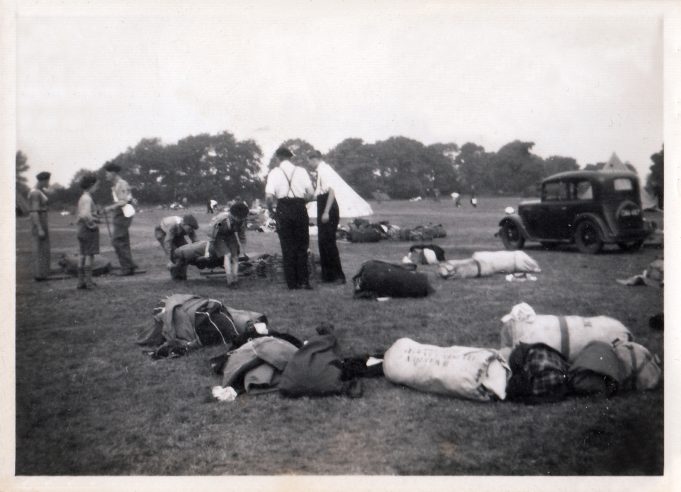 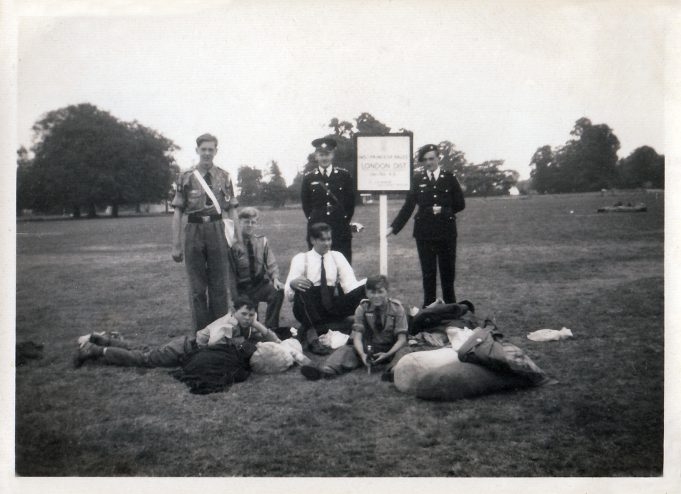 Dave has given us a list of people he remembers at the time he spent at The St. John Brigade here in Laindon

Do you remember any more members? 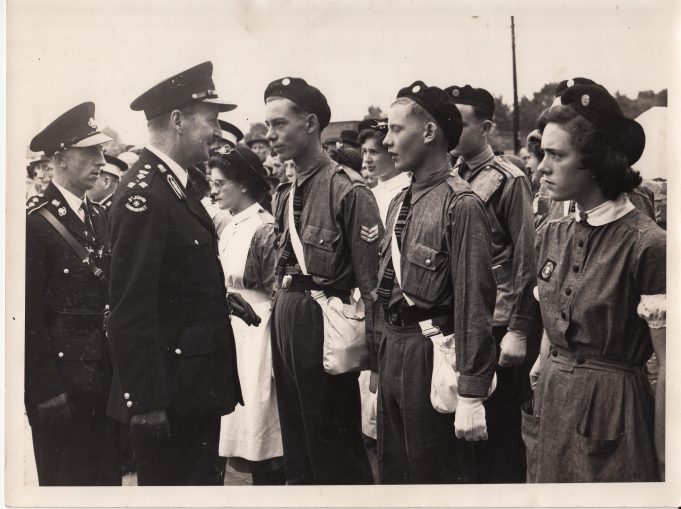 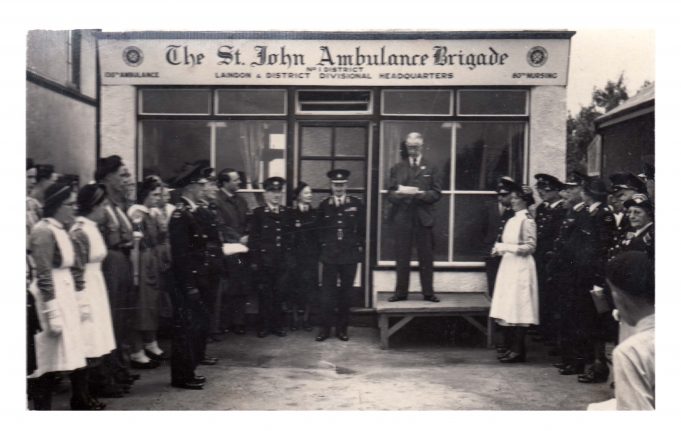 Do you know what’s going on? 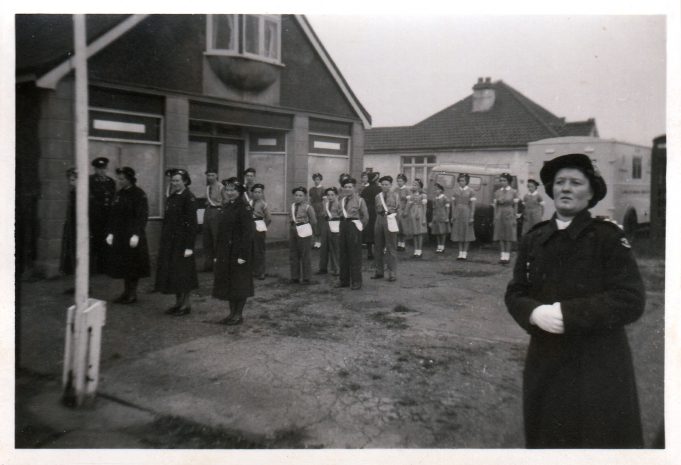 Elsie Finch on a cold parade 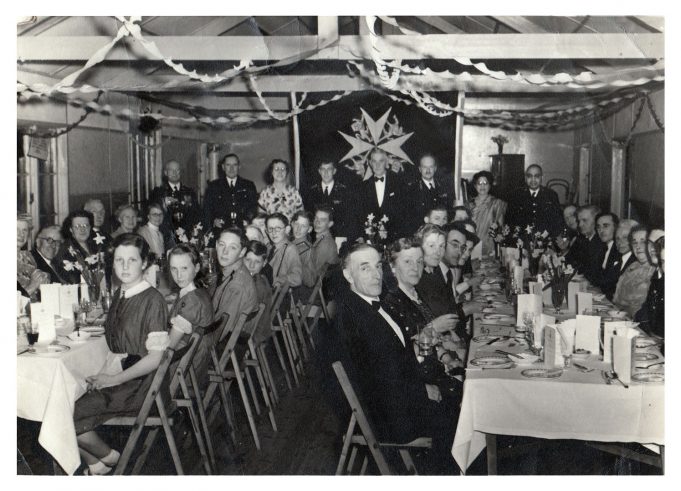 Annual Dinner we believe in 1952 at the British Legion Hall?

Dave related that driver Henry Vine and Tommy Brown were apparently the first ambulance to arrive on Canvey Island  in 1953 when the disasterous floods started. They both went on to receive a Serving Brothers Award for their assistance and bravery in the tragedy.

The St. John Ambulance staff then, as now, were called to do various duties around the county, attending Speedways, Fetes, Football Matches, Carnivals and many other public events. 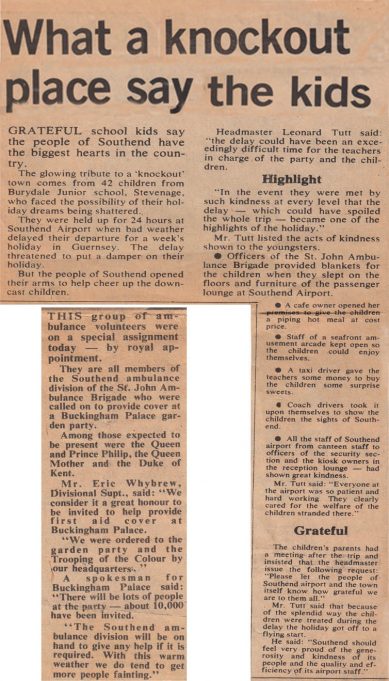 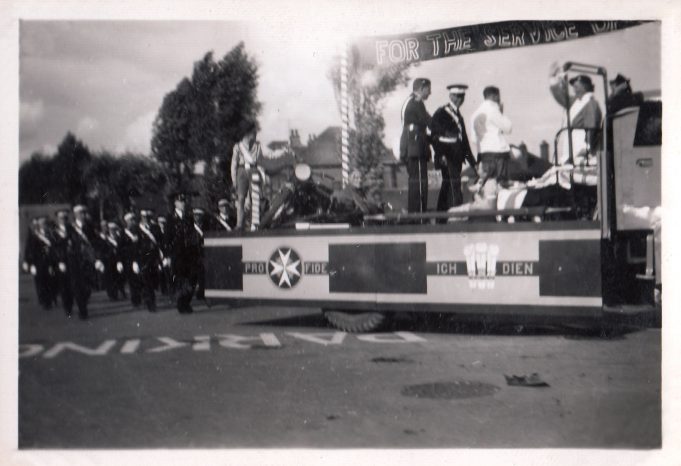 Dave married Margaret Ann Camp in 1961 and went on to have two daughters and a son. Margaret’s father was Sergeant Bernard Camp stationed at Laindon Police Station. He also remembers a Police Sergeant Reid and PC Wilfred Reed serving at the same station in Laindon High Road.

Dave Peck went on to do 43 years service in total for the St. John Ambulance Brigade. He moved to the Southend Division where he rose to the position of Acting Superintendent. Over the years he enjoyed doing competitions and won many awards thoughout his time in the force. He was also a First Aid Instructor. 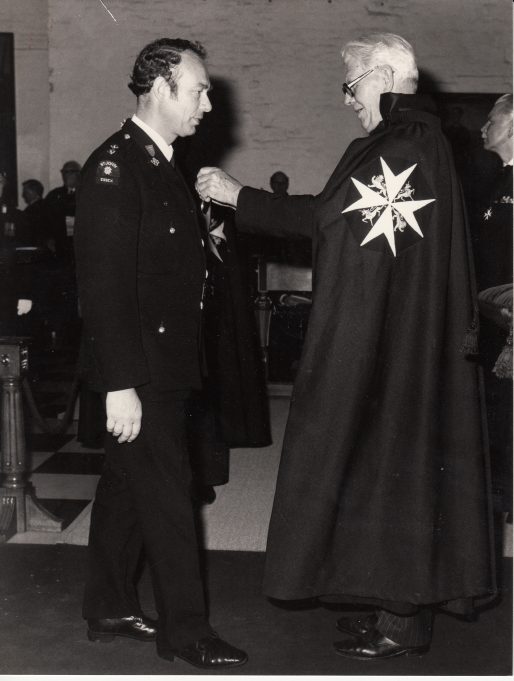 Dave being made a Serving Brother of St John 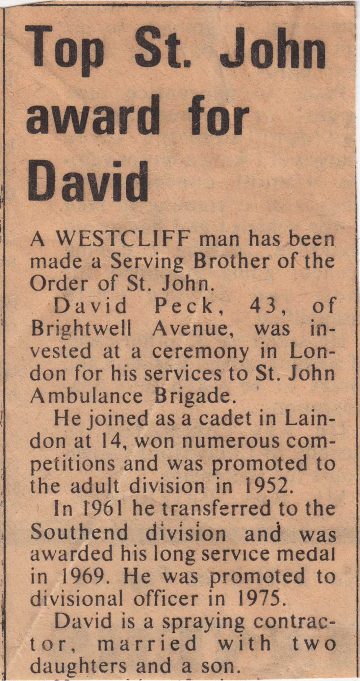 Among some of the duties he was involved in were:- 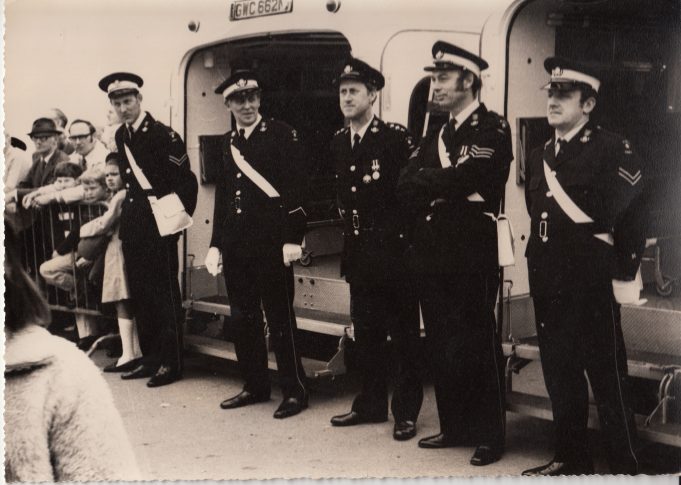 The pictures Dave has allowed us to put on the site are from his own personal collection.

Do you have any photos from this time or know any names of the locals in any of the pictures above?

Please feel free to add any comments or memories.