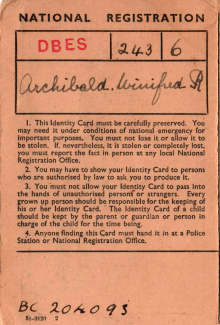 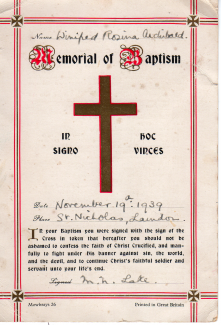 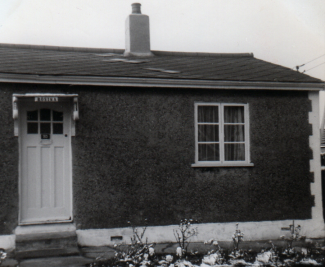 zoom
Rosina where Winifred Archibald lived as a child 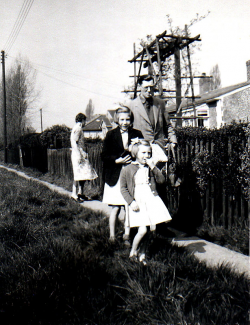 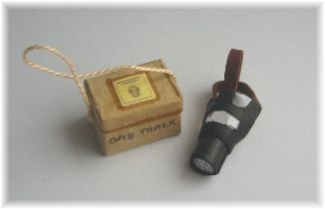 My birth, on Thursday 23rd September, 1939, caused some consternation in the hearts and minds of other members of my family.

To my parents, John and Winifred Archibald, a fourth daughter, when they had been convinced I would be a boy; to my sister June, five years older, a usurper of her status as youngest child, and to my maternal grandfather, another infant to protect from Germans, should they invade.

With the Second World War only 20 days old, I was blissfully unaware of this event. However, the need to register for the purposes of a National Identity card, was on the doorstep of “Rosina” Buller Road, Laindon in Essex the following morning in the person of the registrar, who needed a name for me.

Having only prepared for the birth of a son, my father, in his haste, gave me the name of my mother, Winifred, and Rosina, from the house, and thus I was baptised on the 19th November, 1939 at St. Nicholas Church, Laindon, by the Reverend Lake.

“Rosina” was a detached bungalow, built sometime after the first World War, hence the name of the road being ‘Buller’, after the General of that name. It was owned by a family called Smith, various members of which were all close by. Mr & Mrs Smith Snr lived on the opposite side of the road, with a much larger garden where they both worked diligently to provide plenty of vegetables. A married daughter, Dorothy lived three doors down, with her husband Fred Reynolds in a bungalow named ‘Rita’ and they later had a son, Tony Em and Jim Smith were our immediate next door neighbours, and their bungalow was named ‘Jeanette’. They had no children, but a friendly little dog, ‘Jilly’. On the other side of “Rosina” lived Mr & Mrs Smart. Next door but one, at ‘Alema’, lived my mother’s parents, William and Winifred Sumpter. There were some other bungalows – Mr & Mrs Coote Snr, lived further down the road on the other side and kept an allotment – their son and his wife and two children lived next door to them. After this there was a chicken run, attached to the house which faced on to Victoria Road, running parallel to Buller Road. A Mr & Mrs Lodge lived next door to Mr & Mrs Smith Snr, but I cannot remember any others.

Our bungalow had a living room to the right as you entered the front door and a bedroom on the left. Behind this bedroom was another one and a small bedroom behind the living room plus the kitchen. Added on to the kitchen were a walk-in pantry and a coal store (at least, that is what we used it for). There was a back door in the kitchen with a porch and an outside lavatory. The only heating was provided by a coal fire in the living room. In winter I recall ice forming on the inside of our bedroom window, so dressing and undressing were best done under the bedclothes! There was a large garden with fruit trees all around the edge, a left-over from the orchard that occupied the land before the bungalow was built. A well provided all the water, fetched up in a bucket and chickens and ducks were kept along the left-hand side of the garden. Again, these periodically provided food for the table together with plenty of vegetables, grown either by my father, or my grandparents from “Alema”. On the right-hand side of the garden there was a wooden shed, the washing-line and a swing. My sister Olive also remembers a pond at the end of the garden, but she feels it was emptied and the hole used for the Anderson shelter.

At the time my parents moved to Laindon, in 1935 (from West Ham), Buller Road was unmade with just a narrow path on our side of the road. This was built by the residents – just wide enough to accommodate our pram wheels. It went down to Mr & Mrs Reynolds’ bungalow and from then on it was just a cinder path, probably maintained by the ashes of everyone’s coal fires. Where this began there was a thicket of blackberry bushes – much appreciated by everyone in late summer! The road, was actually just two fields, divided half-way down by a ditch over which there was a wooden bridge. Here there was a slightly larger house “Kirton” which had thick bushes each side, plus there was a big dip which filled with water when it rained. Mr & Mrs Harrap lived here.

Beyond this bridge, even the cinder path ran out, leaving just an odd stepping stone amid the mud ‘track’ as a guide for the rest of the way down to Tattenham Road. Either side of this part were empty fields, with just an old wooden bungalow about half-way down, lived in by a Mrs. Fox (?). The area where the bungalows on our side of the road were built was originally an orchard, owned by a gentleman who lived in a large house on Roberts Road, just behind “Rosina”. On the corner of Buller Road and Tattenham Road was a pond with a willow tree hanging over it. There were times when I was growing up when I attempted to catch fish, but was never successful. Between this road and the High Road was another field with nothing but a wooden shed – quite large it seemed to me at the time. Here Ron Moorcroft kept a printing machine which kept nosy children fascinated watching the rollers run up and down the inking plate, with a regular clickety-clack.

During a bombing raid in 1940, whilst sheltering under the dining table in the arms of my eldest sister, Olive, the shock-wave of a falling bomb affected my eyes which, in Olive’s words, “dropped”. This resulted in a squint in the left eye and resulted in needing to wear glasses throughout my childhood, usually with the right eye covered, to enable the left to regain strength after being left weakened, although it did straighten within a short time.

Memories of those early years are hazy. Being gently knocked down by our dog, Peter, and then nudged under the piano whenever the air-raid siren went is one. Three figures pushing me in the pram – my elder sisters of course, another. Once, having been taken for an outing to the Recreation Ground in Langdon Hills, my sisters persuaded me to jump from the edge of the sandpit to the central ‘island’. However, on this occasion, instead of being filled with sand, there was only water. Being thoroughly wet I was then taken to our aunt and uncle’s (Ernest and Hetty Archibald) house nearby in New Avenue, to be dried before Mum found out. Olive, Jeanne and June all deny any knowledge of this early attempt to drown me, but it is, quite naturally, very vivid in my mind. I am also aware there was a German prisoner who worked in the garden for our neighbours Em and Jim Smith, not for money, but asking for coffee, which he could then send back to his family. He gave me a toy which he had carved but I have no recollection of what it was.

Then there was the fitting of the gas-mask. As a baby, mine was all enclosing, I didn’t like it one bit I’m told, and I was not much keener on the later version which fitted over just the face, but it became normal later to at least carry it wherever one went.

My father worked long hours in London and was usually on the train to work before I got up each morning and still away when I was put to bed at night. He was represented in my young mind as being the tin-hat on the chair in their bedroom. Not being used to seeing men I became very shy and one day, I think it was my birthday, the elderly father of our next-door neighbour, Eva and Ted Smart, visited them. He then came into our house wanting to give me some money, 2/6d I seem to remember, quite a fortune in those days. However, he seemed to me a strange figure, quite short and stocky, swarthy-looking with a mass of white hair – I hid behind a chair in the living room and would not look at him to receive the money.