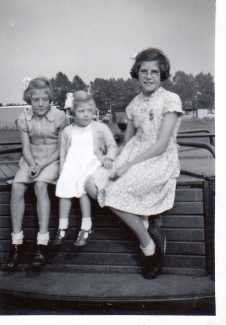 zoom
Winifred Archibald with her two younger sisters, Joan and Vanessa, on the merry go around 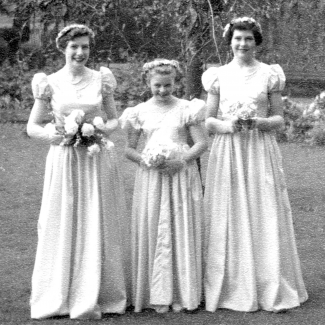 zoom
Winifred Archibald (centre) is bridesmaid for the first time, at the wedding of her sister Jeanne in October 195 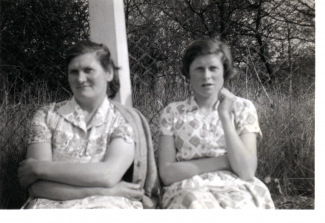 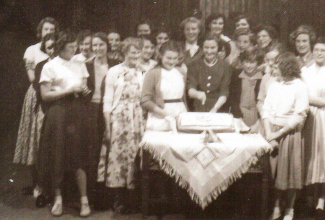 zoom
Girl Covenanter's at the Manor Mission on Manor Road

With my two younger sisters, Joan and Vanessa, summer months would be enjoyed playing in the recreation ground at the top end of Victoria Road. I do remember the prefabs being there and they were very much admired by all who lived in them. There were bungalows along Devonshire Road at the top of Buller Road, where there were delightful fruit trees. Despite our garden being full of fruit trees of all varieties, those in the front gardens of others proved to be much more attractive and we rejoiced in ‘scrumping’ apples from them.

We had a large garden in which to play, tennis and putting on shows being a couple of our favourites. Therefore, our wanderings at this stage did not take us very far afield. There were always some errands to do for Mum who did not have the best of health. On the way home from school I would stop at Slopers, the dairy at the corner of Victoria Road, to collect shopping. I was also called upon to take the weekly grocery list to the Co-op for it to be delivered by the errand boy later in the week – by bicycle! We also had little jobs around the house, washing-up and drying, turning the handle of the mangle on washing days, even chopping wood for the fire when I was old enough.

Around this time I was becoming conscious of how I looked, and wearing NHS glasses to strengthen my weak eye did not improve my appearance, so I stopped wearing them. At my next optician’s appointment (in Hornchurch), having tested my eyes, he asked what I had been doing over the previous six months. Under my mother’s glare, I confessed to not wearing the spectacles all of the time. I was then given the wonderful news that, from now on, there would be no need to, as my weak left eye had regained full strength. This was a great help to me when I was a bridesmaid for the first time, at the wedding of my sister Jeanne. The groom was Tony Davies, a lovely man, but a rough football player, as I had discovered earlier! This was in October 1954, just over a year after my eldest sister Olive was married at St. Nicholas Church, to Bryan Jones, whom she’d met in London, soon after leaving school.

Outside of school I was very friendly with Brenda, the only daughter of Mr. & Mrs. Andrews who ran the newsagent’s shop at Blackwell’s, in the High Road, not far from the railway Station. We had met through our mutual friend, Ruth Pasco, who lived in Essex Road. Brenda and Ruth travelled together to Grays where they were at school, Brenda at the Palmers School for Girls, and Ruth at the Technical School.

Brenda and I did paper rounds together in Laindon and Langdon Hills, and together with Ruth, arranged many cycle trips, to Southend, Billericay and Tilbury, only once needing rescuing by her father when we got a puncture. We also enjoyed going up to London to watch football matches, Tottenham Hotspur or Arsenal I believe. Brenda’s parents attended Military Tattoos held at the White City in London. I was always invited to go with them to keep Brenda company. They also took me on holiday once to Brixham in Devon for the same reason. However, I left school at the age of fifteen and subsequently lost touch with her.

Ruth and I were both very involved with Brownies, Guides, Sunday School and Girl Covenanter’s (pictured right) at the Manor Mission on Manor Road. Freda (?) was in charge of most of these groups, I cannot remember her surname, but she lived on a road half-way up the hill of Nicholas Lane, behind St. Peter’s church. Other girls I remember are Kathleen Rowe, twins Janine and Jennifer Clegg, Myrtle (?), Dorothy Matthews, Joan Powell, Rosemary Grainger, Olive Sawyer and my friend from Laindon High Road School Pat Hutchins.