Nicknamed the Father of the Laindon Labour Party 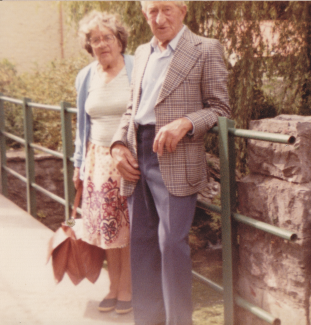 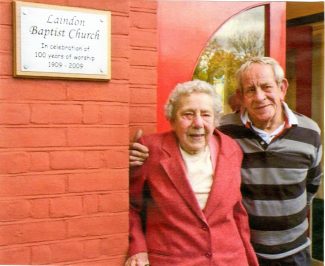 zoom
Hilda Kiddell and her brother Brian alongside the commemorative plaque at the Laindon Baptist Fellowship. 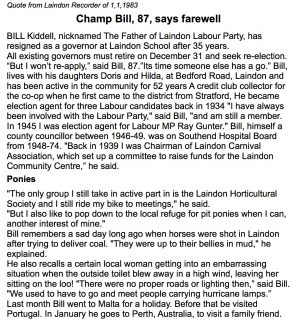 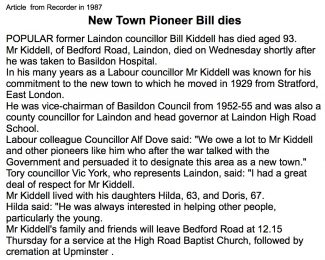 Bill originally came from Stratford, where he was born, in 1894. He served in the Royal Navy during the First World War, and after the war worked for the railway (LMS), possibly at Stratford although it might have been Plaistow.

Bill married Emma soon after the war in 1919 and they moved with their young family to a bungalow in Dunton Drive (corner of Topsham Drive), Laindon in 1929. This is where Bill and Emma’s children grew up, that is Hilda, Doris and later Brian. They also had an adopted cousin Vic.

Bill commuted for a while to Stratford by train to continue his work with the railway. Then after a while he got a job with the Mutual Co-op Society, working locally, collecting credit club money door to door, and at first mostly on foot. He was known to go as far afield as Pitsea. Eventually Hilda convinced him to get a bicycle, which she helped him learn to ride.

Bill and the children moved to Bedford Road (where Hilda still lives) in 1973, Emma having died by this time. Vic had also married.

Bill must have eventually bought a car, as did Hilda which she kept at an address in Buller Road. This was the address of Mrs Andrews wife of Mr Andrews who used to run the Post Office at the corner of Laindon High Road and Denbigh Road.

Bill made a good contribution with his voluntary charitable work in the area. He was vice-chairman of Basildon Council 1952-55 and a County Councillor for Laindon. He was Head Governor of Laindon High Road School and as a member of various other organisations he is well remembered. Bill died at the age of 93.

The following photograph is of two of Bill’s children

Bill’s daughter Hilda is mentioned quite a bit because of a reference to her in the Archive item about Laindon Baptist Church, with which she has a long standing connection, particularly with the Girls Brigade.