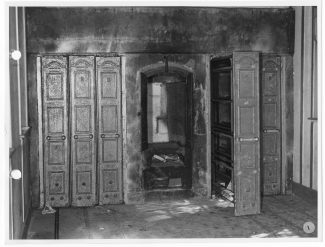 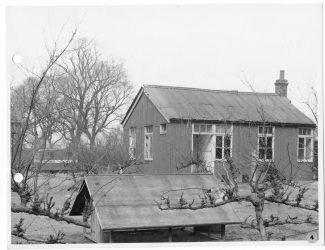 My late father Stanley Charles Bathurst (1905-1986) was, pre WW2, a journeyman house painter and decorator, and was therefore constantly subject to the vicissitudes of not only the English weather but the vagaries, peccadilloes and evasions of the various employers for whom he worked. Consequently he was almost a lifetime member of the fellowship of the Ministry of Employment because he spent so much of his time on their premises lined up for his “dole” having been “stood off” for trivial offences like attempting to work in the rain, or, worse still, trying to do a “proper job” by burning off, rubbing down, sanding off, re-knotting and applying the right number of under-coats when all the boss wanted was to see was the top coat applied while the client wasn’t watching so he could get the bill paid and in his pocket and away before the paint flaked off!

In September 1939, work dried up altogether in his trade and the Ministry of Labour had become the Ministry of Labour and National Service with all sorts of “special powers”. As a result Stan Bathurst found he could be “directed” to various jobs that made use of different tools from paint-brushes, wall paper scissors and trimmers etc., things like shovels, spades and concrete-mixers and so on. He took part for a time in a team building what were called “pill-boxes” around the Essex countryside, some of which I suspect still stand, although the only one I ever knew of that he was definitely involved with was at the approach to Grays beach, beside the River Thames, probably long demolished.

However, around the time that the Germans stepped up their air assault on Britain, my dad was re-directed to the job of Warden at the Dunton Farm Colony, work that involved acting as carer to the inmates, combined with things like fire-watching and general ARP duties. For this he was issued with a black steel helmet and placed on a roster devised to ensure there was 24 hour coverage at Dunton. Part of the allocated duties included operating the warning siren when told to do so by telephone from the Police Station, which was situated at the corner of Laindon High Road and Victoria Road. It seems that the actual duties attached to the job were not too arduous, as, as far as the colony’s inmates were concerned, all he had to do was to see they got on with their allocated tasks on the farm as usual. From the point of view of this aspect of the job there was a bonus because, after one shift, he came home with a sizeable sack load across the handlebars of his bike, full of Egremont Russet apples that had been picked in the Colony’s orchard during the day. These were added to the supply of fruit (both apples and pears) from our own trees, and my mother (Lillian) got them bottled or otherwise preserved (those not scoffed by myself and my brother, Mike) and in the preserve cupboard as a supplement to our rations.

It was while he was cycling along the narrow concrete path to his night shift at the Colony that my father, no believer in the supernatural, at the height of the night blitz on London, saw a strange light hurtling along on the adjacent railway line where it runs through the cutting at the top of the Dunton Bank. This apparition has never been explained but he found it sufficiently un-nerving enough at the time to make him jump off his bike and crouch behind the hedge as it went by, My own feeling about it, as the result of knowledge about the railway acquired later reveals, is that, given the circumstances of the time when the worst effects of the air attack on London were illuminating the sky with buildings on fire all over the place, what father observed was a “blowing out” of the electric track detection system connected with the nearby Dunton East section signal box. If somewhere between Upminster and Bromley, the adjacent District Line supply had been damaged this could leak over into the running lines of the LT&S railway and a surge of electricity at a higher voltage would cause the lower voltage track circuit-system, used to detect the presence of a train, to “blow”.

In the late 50s early 60s a similar incident occurred in the East Ham area. A westbound District or Metropolitan train came into service from Barking with a defective pick-up shoe on one of those desperately foggy afternoons that were experienced in those days. As this train passed the signal box at East Ham No2 it caused the current from the live District Line rail to surge across, via the rods operating the steam line’s points, through the lever frame in the signal box and cause the sort of surge I have described above to bring all of the signals in the area to the “stop” position. Even the signalman got a shock as the result of having his hands on the signal levers at the time. As he couldn’t see what was going on because of the fog (or rather “smog” as it really was) he did the right thing and sent the “danger” or “stop everything” signal to the signalmen on either side. And it did!. For hours and hours! The whole episode culminated in a Ministry of Transport inquiry because, at around 20:30 hours, an eastbound District train that should have arrived at Upminster at somewhere around 18:30, with passengers aboard, ran into the back of an empty train abandoned at Bromley! This gives some idea of the absolute chaos that had gone on for hours. The Deputy Chief Controller at the Fenchurch Street control (a chap from Chalkwell named Cyril Hales was admonished because he was said to have failed to do the “right” thing which was unfair because, at the end of the day, nobody ever said what the “right thing” was that should have been done at the time!). Dig around, and no doubt the whole episode (too complicated to fully explain here) will be found on Google somewhere because of the official inquiry.

Stanley Bathurst, as far as I recall, remained at the Colony until his year came up in the “call-up” lottery, when he went into the Royal Signals (later Royal Corps of Signals) thence onto North Africa (via South America and Africa) to join the 8th Army in its adventures culminating in Northern Italy and Austria. After demobilisation and a short spell on the maintenance staff of St Andrews Hospital at Billericay, he bought a book from the Cooperative Insurance Society and helped to sell policies around Stanford-le-Hope, Corringham, Fobbing etc. until he reached retirement age.