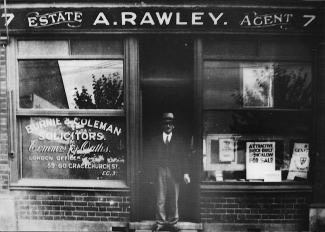 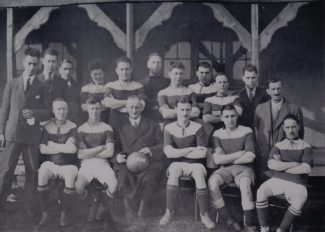 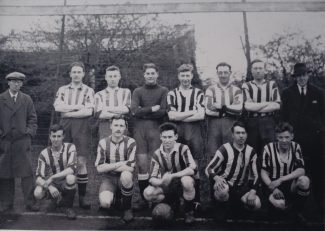 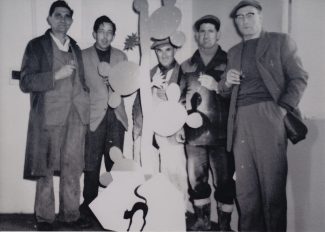 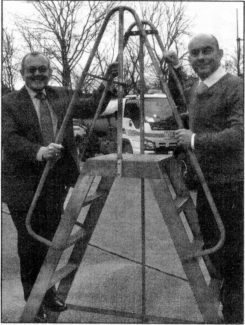 My father, the late Jim Rawley, moved to Laindon with his parents Margaret and Alfred Rawley, together with his four sisters in 1919. His father, Alfred, was a Solicitor’s Clerk to his brother-in-law Walter Coleman; he later started a small estate agent’s business situated at the top end of Laindon High Road and to my own recollection he a had a very small office in the late 60s at the approach opposite the Railway Station, you had to cross the ditch over some wooden boards to get to it.

The family eventually moved to “Nickleby”, St Nicholas Lane – a wooden bungalow they had built but very small inside. It was eventually pulled down due to the Basildon Development Corporation’s compulsory purchase. They lived – (that is my grandparents) for a while in “The Grove”, Langdon Hills, which my father owned.

In his younger days he played football for the Laindon Hotel ? Chris Collins and Sid Clifford also being players.

He served for a while in the Royal Artillery as a Signaller during the War.

He trained to be a carpenter with and by a Mr Patrick. There was another local builder that he knew who was a Mr Cass who apparently built a lot of the bungalows on St Nicholas Lane the same person who built my grandparent’s bungalow.

Dad eventually became a builder, married and had four children and lived in Pound Lane, Laindon in a bungalow built by him, until 1969, when the family moved to Bicknacre in a house that was the last one he built. He was killed in an accident in 1973.

When my father was building and living in Laindon, he built quite a few houses in the surrounding areas as well as Laindon and Langdon Hills. Stock, Horndon on the Hill, Galleywood, Stanford-le-Hope and Ramsden Heath. My sister, Cora Shorter, still lives in one of the properties he built.

In 1961 my brother Colin came out of the RAF and together with my father they started the Plant Hire Company which this year is celebrating its 50th year of business. They used the builder’s yard for a while until a purpose built office block and yard was built at Durham Road in 1968.

In 2003 they moved to Harvey Road, Basildon now running a completely different plant hire company from it’s beginning, now specialising in site accommodation and toilets only. No scaffolding or mechanical plant. Colin runs this with his son Howard so the Rawley name in business is still about.

ROAD crews working on the M25 road-widening scheme between Thurrock and Brentwood can bask in the comforts of home. That is thanks to a Basildon company that celebrates its 50th anniversary this month.

Rawley Plant, of Burnt Mills, manufactures, hires and sells products at the Ideal Home end of the site unit market. The whiff of easy living has gone down well with construction and civil engineering companies such as John Laing, Balfour Beatty, Skanska and Birse, all of whom have hired Rawley Plant’s products. Rawley units are also being used on the Olympic Games site.

The Rawley story began in 1951 with the company’s first contract. It was for the hire of a single ladder and scaffold board to a home decorator in Laindon. The transaction was worth just 30 shillings (£1.50). Today, Rawley has an annual turnover measured in millions. The man who made that first sale, Colin Rawley, still runs the company as chairman. Now, though, he is supported by four generations of the family. “I remember that first sale very well,” says Mr Rawley, “because it was the start of a memorable working journey. It was 1961 and my father Jim, who was a house builder, had seen the potential.”

Rawley Plant’s products grew through tool hire to contractors’ large plant, scaffolding, site accommodation and toilet rental. Then came a change in company strategy. Leaving an overcrowded plant hire sector in 2003, the company opted to specialise in site accommodation and toilet hire. Mr Rawley says: “This sector has grown with the help of two trends – enhanced health and safety regulations in construction and the British love of outdoor events.”