You are here: HomenextPeoplenextFamily MemoriesnextMemories of Langdon Hills Primary School 1948 -1954 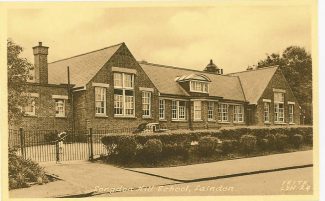 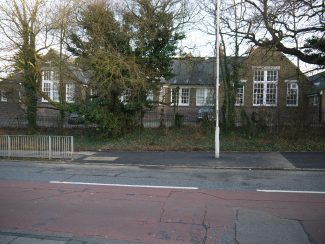 I was born in a Nursing Home in Langdon Hills in 1943, and for 4 years my parents rented a bungalow called “Rosedene” in Dry Street. This property still stands today, extended and with stables and horses in the grounds. In 1947 due to a family inheritance, we moved to “Edith Villa”, a sturdy Victorian semi-detached house in Nightingale Avenue, where we lived until a compulsory purchase order was served on it, in 1961. The school that my four sisters and I went to was just a short walk down Nightingale Avenue, or down the High Road and my memories of it are overwhelmingly positive and happy.

The school later closed and a new one was built nearby in Berry Lane and named Lincewood School although in the first year or two a few class rooms in the old school were used. The school buildings, which date from 1911, are still in use today by education authorities.

I started at the school in January 1948 when I was nearly 5 years old. My first teacher was Mrs Baker, a lively person. We had slates and chalk to start with, but paper and pencils soon replaced them. The classroom was the first in the corridor running east-west, large, and I remember enjoying having stories read to us.

I cannot remember name of my next teacher – she was young and her husband also taught in the school, but I do remember Miss Wendon who taught me in 1950. She still lives, in the Southend area, because Christine Gaywood (maiden name) a fellow pupil met her recently by chance in Marks and Spencer’s. She was a well dressed and precise lady who brooked no nonsense, and we learned to read well and to recite our multiplication tables in her class. There was one boy, Martin Wood, who was inherently naughty, and who was always getting told off. One memorable summer’s day, Miss Wendon’s patience with him was exhausted, and she made him lie down on the table at the front of the classroom. She took off her watch and laid it carefully on her desk, and rolled up her sleeves. Martin was snivelling and pleading as he realised what was coming: “On no, Miss! I won’t do it again Miss! Oh no Miss!”  She was deaf to his pleas, and the class watched in horror as she gave him a good spanking on his bottom which he thoroughly deserved. Those were the days when teachers did not fear being sued for such actions!

I did not flourish with my next teacher, Miss O’Brien. Unbeknown to me and my parents, I was partially deaf, and this teacher had a soft voice for much of the time. I dropped my position in class as a result, and this meant I had to sit further back from the front, making things worse for me. However, she could suddenly fly into a rage and shout, and she was feared. I do remember doing a project on ‘sugar’ in her class, and we all received a small book on the subject by the Tate & Lyle sugar manufacturers.

Mr Walker was next, a small Welshman who of course was known as “Johnny” Walker. He was lively and continued to coach us in arithmetic and reading. He also took us for sport activities, of which more later. I have the fondest memories of Mr Richardson, my last teacher at Langdon Hills. He used to catch a bus from where he lived in the Brentwood area. This meant he was always at school early, and in the spring and summer he would play cricket with us against the school wall. We loved it. He would always bowl, and he was scrupulously fair about letting us all bat. We fielded keenly, and were sorry when the school bell was rung for us to “line-up” ready to go to our classrooms. “Richo” as he was called played with us during all the breaks and he seemed to prefer our company to that of his colleagues in the Staff Room. Once, a boy hit the ball (a tennis ball) so hard it broke the headmaster’s window, but I don’t remember what happened. Probably Richo apologised. He was middle–aged, and had obviously spent some of his life in India, for I remember when he signed my autograph book when we left, he wrote, in Hindustan, with a translation “Knowledge is great Wealth”. The day with him started with a short test of mental arithmetic problems and then we would progress to longer, written problems. We did a lot of writing and spelling and grammar tests, and in the afternoon on Fridays we did model-making, much of it papier-mâché and match boxes. He treated us as people in our own right, not just as children, and we respected and loved him for this. When I passed the 11 plus examination, he wanted me to go to Brentwood School, but because so many of my family went to Palmers’ in Grays, his wish was overruled.

There were other teachers there I remember well. The headmaster was at first, a stern old man called Mr Hall, but he retired and Mr Wiggins (Wiggie), a retired Naval Officer took over. He was lively but with a presence and the school flourished under his guidance. I never got caned, but I once had to stand outside his study for some misdemeanour.

Miss Wilkinson was our music teacher and she was young but plaited her hair in an old way and tied it up in a bun on her head. She is alive today and plays the organ for several local churches and the piano for a local play group. She would stand at the piano so that she could see us all, with barely a glance at her music, and singing away, and she taught us many folk songs and patriotic pieces – “Hearts of Oak”, “John Peel”,  “The Mermaid”, “The Keel Row”  “The Drunken Sailor”, to name a few. And in Morning Assembly, when we sat cross legged on the wooden floor of the school hall, and then stood to recite “The Lord’s Prayer” and listen to other prayers, it was Miss Wilkinson who played and sung the hymns with great gusto.

Miss Wilkinson’s father used to come on Wednesdays after school had finished and open the school library which was housed behind some oak cupboards at one end of the school hall. He used to smoke a pipe, which he was allowed to do after school hours, and we were allowed to borrow one book at a time. I was very keen on “Biggles” by Captain W. E. Johns, and I would often devour the book by Thursday evening and have to wait nearly a week to take another out. This meant that my Dad, who also liked Biggles books, was able to read it too! Miss Elsie Nevill (maiden name, she is still alive) took sport for the girls, but Mr Walker took us boys. We went over the road to the recreation ground for football and other games. I remember the name of the school football captain, Stuart Ramsey. I envied him! The School Sports Day was held on the recreation ground in the summer term. We were divided into four teams Ash (red), Elm (blue), Fir (green) and Oak (yellow). In my last year I was made the boy captain of Fir, and a girl in my class, Sylvia Turner, was the girl captain. We were pretty good runners, and joy Oh joy, Fir team won the sports, and Sylvia and I were called forward to hold the trophy aloft to celebrate our victory. Cameras clicked, but to my horror, when the “Laindon Recorder” came out next week showing us holding the trophy in triumph, the caption read that we were the ‘Girl’s Life Brigade’! Such things can be quite upsetting at that age!

I can remember a number of names in my class. Michael Adams lived in Berry Lane and went to Palmers’. He now lives in the Lake District. Colin Carey, whose father owned a builder’s merchants, and who also lived in Berry Lane, also went to Palmers’ and lives in Colchester now. Dale Roberts still lives in Langdon Hills and was at Palmer’s Girls. Christine Gaywood lived on the junction of the High Road and Grove Avenue. Her father was a Tory Councillor. She was at Palmers’ and I think lives in the Southend area. Then there was Tessa Hall, at Palmers’. I don’t know where she is now. Bernard Redshaw still lives off Dry Street , and comes to Laindon History events. I met him, his wife and his sisters recently. I think Norman Muncy was in our class – he lived in Church Hill, Langdon Hills. Michael Lawrence lived in Dry Street. It would be great to meet all these after so many years, and to be reminded of those times and of others, whose names I have for the present forgotten.