Today memories are all we have left for those of us whose families were born and lived in this area for most of their lives. Now that one of the last landmarks “The Fortune of War” pub has been demolished, only to have more bland houses and flats built in its place. No character is left of what was a small town, where at least once we had a sense of community and identity. Laindon was not as picturesque a town as Billericay or Stock, but at least we had more choice in shops than we have had over the past 30 years or so. There were approximately 150 retail premises in the High Road, from the “Fortune” end, up over the railway bridge to “The Crown“ pub in the 1950s. Let’s hope in the near future things will perhaps improve. Still, back to the memories… 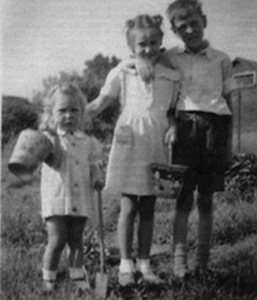 I was born in April 1945 to Frederick and Mary Tyler at “Toby”, a very small bungalow in Northumberland Avenue, the youngest of three children, my brother Donald and sister Joyce being my older siblings. My grandparents Herbert  and Jane Tyler and uncle and aunt, Jack and Florence Rose also lived in the same made up but grass verged road that led down to Barkers Stores at the end. At this junction was Elizabeth Drive, Green Lane and over the railway crossing, Primrose Hill. Our bungalow, together with some old railway coaches further up the road used as homes by other families, backed onto the north side of the Southend-Fenchurch Street railway line. Most properties had large back gardens full of vegetable patches, fruit trees, ducks and chickens to help supplement our food supplies during and after the war.

One of my first memories was the smell of potato peelings being cooked and mashed with grain in an enamel bowl to feed the poultry, also my mother plucking and cleaning the chickens for our dinner.

We were not on main drainage, so we had the old “bucket and chuck it” loo at the bottom of the garden. The aroma in the summer was not pleasant and the expeditions out in the cold weather in winter left a lot to be desired, but Boy! did we have decent produce from the garden. The flavour of the vegetables and rhubarb was superb. We were certainly not deprived but because most items were rationed or in short supply after the war I was apparently wheeled around, when first born, in my sister’s dolls pram until a normal sized pram could be purchased from Roomes Stores in Upminster. My mother, like many, had to be resourceful and was able to make a meal from whatever was available. Brawn, pressed ox tongues and stuffed hearts were all part of our diet when rationing was part of our daily lives for quite a few years. 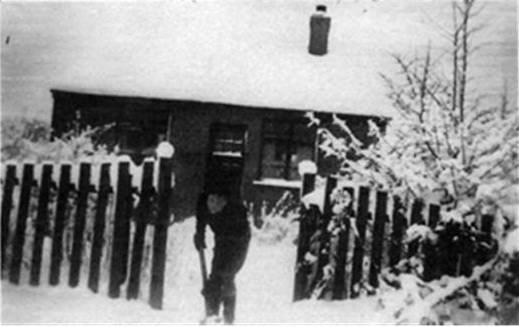 I still prepare tongue and hearts for my own family. Sweets were rationed until 1953 and I can remember Mum making cones with greaseproof paper and putting a mixture of chocolate or cocoa powder (whichever was available) and sugar into them for us to eat as a treat instead of sweets, if we were really lucky 100s & 1000s were added too. Homemade toffee apples and fairy cakes, with cream made from corn flour and vanilla essence, were another inventive way to satisfy our appetites for sweetness.

My grandfather Herbert Tyler was well known at the Winston Club that was at the top end of Northumberland Avenue at the junction with the High Road. In the 1930s and 40s, making their own entertainment, the older folks enjoyed the club, playing cards and dominoes and drinking. Younger guys hardly ever beat the wily old fellows at the games. As children we tried but never succeeded.

Having other members of our family all living in Northumberland Avenue, our lives seemed very busy. My uncle Jack Rose was the master baker at Cottis’ Bakery for 40 years and I remember him making the large wheatsheaf shaped loaves for the Methodist Church Harvest Festivals for many years.

We were not well off and like most families we were resourceful in making most things we needed. My father Fred Tyler was a cabinetmaker and like many other locals spent many hours travelling daily on the old steam trains to work in London. During the war he made Mosquito aircraft at Wrightons furniture factory in North London. Then, after peace was declared, he spent the rest of his working life making furniture until he retired at the age of 67.

To this day the smell of sawn wood, glue and Dad’s “Erimore mixture” tobacco evokes memories of warmth and comfort at his homecoming.  This was brought home to us one very foggy night, 30th January 1958 to be precise, dad was involved in the Dagenham Rail Crash where there were fatalities and many injured passengers. Fortunately he was only slightly hurt; although when he hit his face during the crash he damaged his nose and was unable to smell for the rest of his life. (No thought of compensation for injuries in those days.) At that time we were not on the telephone, so the anguish of not knowing for hours of his predicament was agonising for all of us.

Walking through Blue House Farm was one of the routes we took from our little home to meet my big sister from Markham’s Chase School.  Passing the dovecot by the high hedge and going onto the farmland where cows seemed always to be grazing. I was never keen on cows and to this day I still dislike bovine company when out walking. The path then led through the farmyard, down the long drive and past Lawrence’s sweet shop opposite the school. 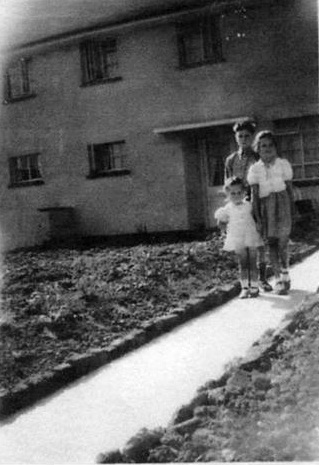 Patsy, Joyce and Don in front garden of Powell Road

In July 1948 we all moved to Powell Road, into a new council house, together with our grandfather who was now widowed. Going from a small bungalow with and outside toilet, to a 3-bedroom house with all the mod cons and TWO loos was a real luxury. Both the front and back gardens were large so we were still able to supplement our food by growing fruit and vegetables, and keeping poultry. Before we had a refrigerator eggs were kept in an enamel bucket with “isinglass”, a gelatinous substance used to slow down deterioration. Mum used the fruit to make jam, some preserved in bottles as were some of the vegetables.

Does anyone else remember the blocks of salt? I used to enjoy carving off lumps and breaking it down to be packed around the vegetables being bottled. After retiring Dad spent many hours in that garden and continued to provide the family with fresh veggies for many years.

In 1950, aged 5, I used to walk all the way, by myself, to Markham’s Chase School. I would walk through Pelham’s Alley, past Ashton’s Wood Yard and Pelham’s sweet shop on the left, crossing the High Road then up Nichol Road, which was opposite. This led to Tavistock Road, then across Basildon Drive into St Nicholas Lane and down Markham’s Chase. It was approximately 1 mile but I enjoyed picking wild flowers and berries along the way. It’s a pity children are unable to enjoy that sort of freedom today. I loved the smell when entering the school, the ever-present aroma of chalk, school dinners and hot, grubby children.

In 1953, to celebrate the Coronation of Queen Elizabeth II, we performed traditional Maypole Dancing in period costume. (See picture below)

Whilst at Markhams Chase I was a member of the school netball team and choir (see pictures below). I also remember being taken on a school trip to The Tower of London, which I found fascinating. 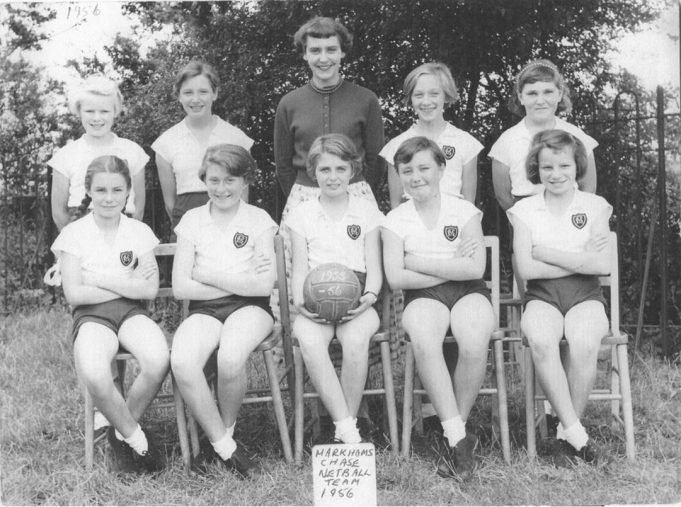 Patsy as a member of Markhams Chase School netball team 1956 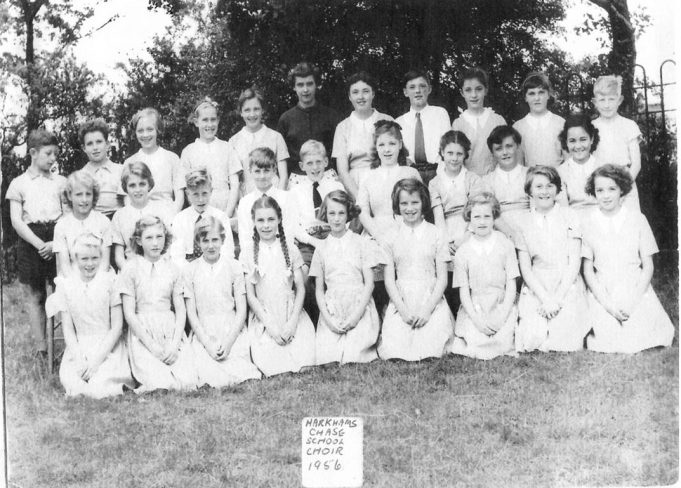 Patsy as a member of Markhams Chase School choir 1956

I started at the Laindon High Road School in 1956 and fortunately enjoyed it to a great extent, especially art and domestic subjects, and did not have many bad experiences.

I expect many pupils have other memories of their time in that educational centre, pure hell if you had a teacher that was less than fond of you!! The school is one of the only original buildings left in Laindon, which is a shame. 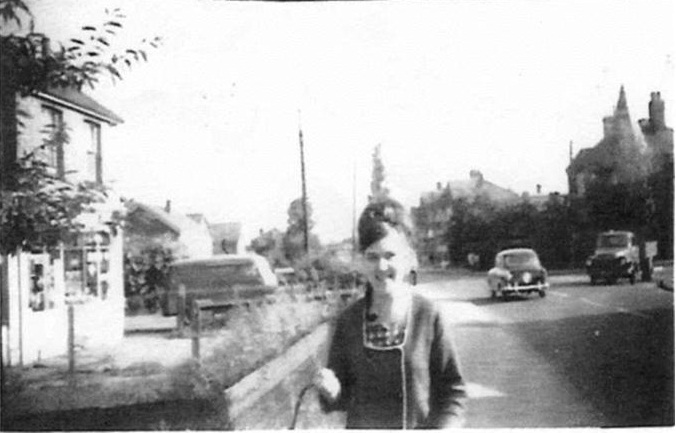 Me in Laindon High Road, in 1964, with the “Hiawatha” at the junction with St. Nicholas Lane in the background on the right.

Who remembers? The Memorial Hall with the basic necessities for comfort, the squeaky wooden floorboards and stage, where many of us took our first steps in attempting ballet and tap classes. Also the many events for the local folks that took place there: plays, shows, pantomime, flower and produce shows, etc.

There were also carnivals that stretched along the High Road in the summertime.

The Co-op Stores with several different departments: butchers, bakers, grocers and drapers. The overhead cash canisters that whizzed above our heads on wires, with the money and invoices, across to the elevated wooden booth, which housed the cashier who would pull a handle to return the canister with the change and receipt to the waiting customer. The dusty window displays of faded, empty boxes and tins of merchandise and the less than inspiring clothing, hanging on chrome stands, looking very forlorn.

Pelham’s sweet shop, was owned by an elderly Polish lady who stood behind the high dark wooden counter. I remember she seemed very gruff and austere. I would by 1d drinks of cherryade, in a small glass, on my way home from junior school in the summer. My favourite sweets were proper lemon sherbet (I recently found a shop in Maldon that still sells it), dew drops, flying saucers, wine gums, gobstoppers, 4 for 1d chews, etc, etc. Oh! Innocent days.

The Eccentric Old Lady with a wooden barrow, in very shabby clothes, walking up and down the High Road?  We knew her as “seven raincoats”, one wonders what happened in her life for her to live in such a way, so sad.

The baker’s roundsman with huge baskets filled with bread and buns delivered to the door.

The fishmonger and his hand cart, ringing his bell on a Sunday evening, selling winkles, cockles and shrimps for your tea.

The coalman heaving great heavy sacks of coal into our bunkers.  Real fires that burnt your skin because you sat so close to the flames, even our new house was draughty and had no central heating. Real toast made on a toasting fork and baked potatoes cooked in the ashes of the fire.

Why is it that other towns and villages seem to have been proud to modernise but keep some of their older landmarks, as well as build new properties, to keep the identity of their area? Successive “powers that be” seem to have been intent on destroying Laindon’s heritage. What are we left with now? They have forever obliterated what was once our little corner of Essex.

There was a sense of community here where everybody knew their neighbours and children and if any of us kids were up to mischief someone would tell our parents so we would get it in the neck from both them and the aggrieved. Society was really, to a great extent, self-policing because everybody knew everybody else. Although the quality of life, comfort and expectations are much greater now things were so different back then. Of course life was not perfect by any means but perhaps it was simpler and, in many ways, happier.

Let’s hope the younger generations growing up here now will have their own favourite memories after reading and seeing how Laindon developed over the past generations. It’s up to us old “Laindon Originals” to pass on our recollections so they can be recorded for prosperity. 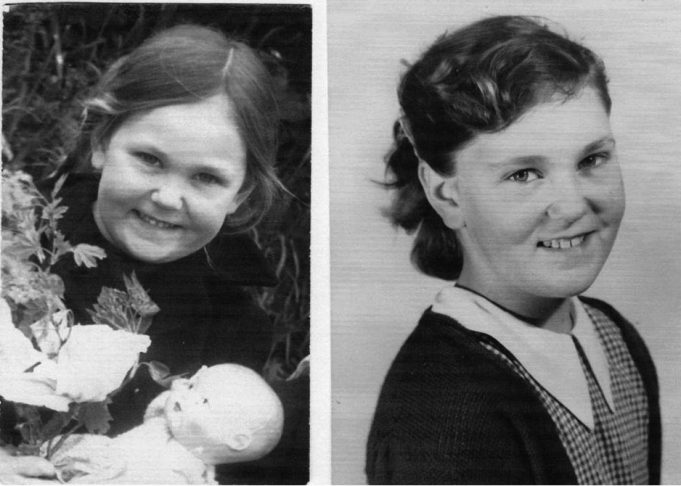