My education began at Markham’s Chase School in 1945.  Headmistress: Miss Janet Duke formerly a teacher at Laindon High Road School. My teacher was Miss Arnold, a lovely, kind woman and when we moved up a class, she came with us so I was in her class for some time. We wrote on blackboards with chalk. Later we had exercise books and wrote in pencil, only going on to pen and ink and joined up writing when we were about 8/9. In 1946 Miss Arnold was very excited to see that almost every child had brought a banana to school; available for the first time since before the war. Every time a child came through the door with a banana she wrote the word ‘banana’ on the blackboard. 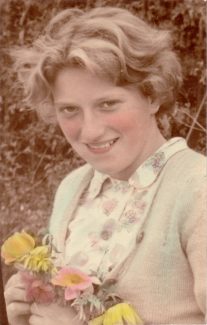 Each classroom had a stove which burned coke. Whilst with Miss Arnold I sat next to Jessie Seager and Myrtle Gray. Other girls I shared a desk with at various times were Sylvie Short, Agnes Lewis, Jacqueline Stapleton, Pat Riggs and Pamela White. Among other pupils I remember are John Rugg and Leonard Williams who were very bright and Pamela Whitehead and her cousin Alan Wickens (deceased) who were good at sports.

To begin with school lunches were served at our desks as there was no dining room.  Later, during playtime we were able to watch the dining rooms being built.  My next teacher was Mrs Purdy; then Miss Burge (who I understand is still living in the bungalow in Noak Hill Road which she purchased from another teacher, my Uncle Richard Devine, circa 1957). Miss Cock was the next teacher and she had a short stick which she used to cane the hands of misbehavers.  She wore her black hair in a semi-shingle and had a gold bangle on the upper part of her arm into which she tucked her hankie. She didn’t like children with runny noses and kept a supply of parachute silk to cut up as hankies. I think my love of reading began in Miss Cock’s class and even after I had moved on to the next class she would lend me books out of her cupboard.

In my penultimate year I was in my Uncle Dick’s (Richard Devine)class, in one of the dining rooms, which doubled as classrooms. I saved my pocket money and bought one of the new ball pens, a white one. It cost 5 shillings. Mr Wiggins was the name of my last teacher. In this class we did a sort of pageant with scenes from the reign of Elizabeth I. Pamela Whitehead played the part of the Queen and I can still recite her speech at Plymouth just before the Armada.  “I know I have the body of a weak and feeble woman” etc……….

It was a long trek from Spion Kop to Markham’s Chase but I was lucky enough to have a bicycle. On Wednesday afternoons, at the age of 8, I stopped at Mrs Sparrow’s in Nicholas Lane for piano lessons.  A year later, when she retired I went to Miss Bright’s in Church Road.

My best friends at Markham’s Chase were Sylvie Short and Jacqueline Stapleton (deceased). I met Sylvie at the age of seven when she moved with her family from Bethnal Green. We were neighbours so went to and from school together. Down King Edward Road, along the High Road, turn left at Hiawatha, up St Nicholas Hill, along St Nicholas Lane and right into Markham’s Chase. The first time I saw Jacqueline was when our  mothers took us potato picking during the war. My mother only did it for a week as it was hard on the back. Another girl I met potato picking was called Diana Pocock.

Back home, along with the neighbouring children, games were sometimes played on the Top Field. A kind of hide & seek we called Tin Can Copper was favourite, along with rounders etc. Sometimes a gang of us would go off, perhaps to the ‘rec’ or the ‘second rec’ over in Langdon Hills.  When I was about 8 or 9 I wondered far too far away from home with my pals – to Waylets to gather chestnuts.  When I looked up I saw my older brother Den hiding behind a tree.  He had come with his friend Bobby Richardson on their bikes. When he knew I had seen him he came over and said “Whatever are you doing here?” And gave me a ride home on his crossbar. I can still feel the wind on my face as we bombed along Dunton Road, I felt like we were flying. That ride was worth the telling off I got when we got home. 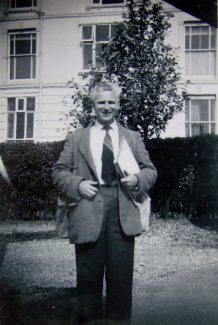 In 1950 I moved to Laindon High Road School. School Motto: Forti et fideli nihil difficile. (To the brave and faithful nothing is difficult) Headmaster John Woodward.  Form teachers: 1st year Miss Jollyman, Biology teacher, 2nd year Mr Wanstall also Biology, 3rd year Mr Gay, Geography and then for the 4th and 5th years, Mr Cluff, Science. Mr Rees took us for history, Mr Miniken for art, Mr Lane for Maths and Mrs Badger for domestic science. Miss Maitland was the shorthand/typing teacher. Mr Cluff took us for English in the 4th & 5th years and we found that if we asked him a science question at the beginning of the lesson, he would use up the whole lesson talking about it and we thus avoided what we should have been doing.

I remember Mr Woodward coming in to our class and announcing The King is Dead; Long live the Queen! I got to know Mr Radford, the first ever headmaster as he used to visit the school once a week.  His reputation was that he never used the cane. 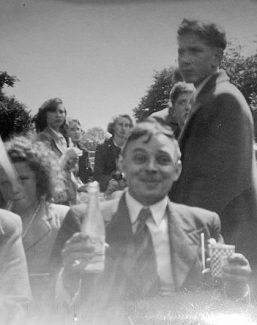 Mr Gay on outing to Windsor

To celebrate the coronation a pageant was held comparing scenes from Elizabethan times to the then present day. I was in the choir and we began the proceedings by singing “Greensleeves”. We were all dressed in Elizabethan style. Sylvie Short played Elizabeth I because she had lovely red hair and she came onto the scene riding a horse with two attendants also on horseback. Demonstrations of roller skating and country dancing were two of the examples of modern times.

In the second year, when in class, whenever the teacher left the room, two boys, Michael Church and Duggie Campbell used to stand up and recite ribald poems. They had a wealth of them, goodness knows where they got them from but they certainly kept us entertained.  When we heard the footsteps of the returning teacher they would quickly sit down and we would get on with our work.

Some of the prizes I won were for biology, history, music and domestic science. I was in the school choir and enjoyed going to the choir festival at Benfleet when Dr. Swinburne conducted and baritone Scott Joint entertained us. We went several times with Mrs Teasedale, the music teacher, who replaced Ms Pearce when she retired. I was a school prefect. 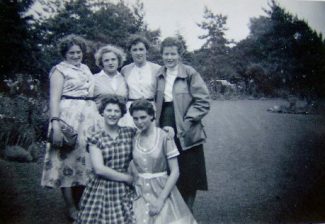 In about 1954/5 a school outing, involving almost the whole school, took us to Norfolk. By train as far as Diss and then coach to Norwich and the Broads.We thought Diss was a funny name for a town and much doggerel was composed to rhyme with it!  Little did I know at the time that I would end up living in Norfolk, 10 miles from Diss. 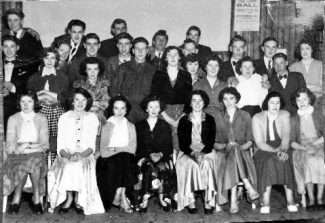 Leisure time in Laindon was mainly the cinema or dances. My brother Den, when he came home from doing his National Service took me to the Radion a couple of times a week until his work took him away from home. I was a ready companion as I have always loved the cinema. He used to know Joan Sims who belonged to the same youth club. One evening at the Radion there was a power cut and so no films could be shown, so the manager asked if there was anyone who would like to come to the stage and sing for free tickets. A couple of people did. A young woman sang “On Top of Old Smokey” and a young man also sang.

I belonged to the Westley Cricket Club and one day the famous cricketer Trevor Bailey came to play.

Weekly dances were held at the Memorial Hall and I used to get my hair done at Doris’ in readiness. The Basildon Country Club was another, more up market venue and there was always the dances at the Army Camp in Langdon Hills which were actually very good: plenty of boys. 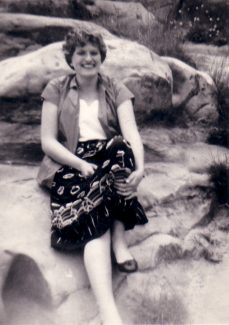 I left school in 1955 at the age of 16 and with the help of the Youth Employment Officer, applied for a job at the Library in Billericay. Whilst I was awaiting the result of the interview I took a job in the newly opened Woolworths in Billericay which had the new, novel idea of self-service. I started at the library about six weeks later. A Miss Cohen ran the four branches – namely Billericay, Pitsea (actually in Vange), Wickford and Laindon. I did stints in all four.  Laindon was handy as I could go home for lunch. Laindon library was at the top end of the High Road on the left. I think there was a sweet/toy shop next door and a dry cleaners the other side.  Annoyingly, the only colleagues’ names I can remember are June Archibald who came from a large, theatrical family in Laindon and Roy Adams who ran the Pitsea branch, although I remember the faces of all the others.  Funny things sometimes happened at the library. I once found a frog swimming about in the loo, goodness knows how it got there.  I was the first one to arrive that morning. And then there was the one about someone leaving a rasher of bacon in a book as a bookmark. After about 3 years I left the library and went to County Hall Chelmsford as a secretary.

My memories of Laindon are all fond ones, remembering the springs and summers and choosing to forget the awful muddy winters, but I cannot forget one dark night walking home from work up King Edward Road and onto the unmade path, the fog was a real pea-souper and I realised as I literally couldn’t see a hand in front of me I would soon be walking around in circles. (This was before smokeless fuel was brought in and fog was called smog as it was really a mixture of smoke and fog) So the only way I could find my way home was by walking with one foot on the path and the other in the ditch as a guide. It worked!! In times of flood it was better to take your shoes off and wade. It saved the shoes and you didn’t slide about so much. One old man we called “Old Joe” once got lost in the fog in Laindon and he was found walking round and round in circles on the lawn in front of the Police Station – this was in the day time.

Thanks to the Friends Reunited website, I have made contact with several long lost friends and even met up with a couple of them.  Among them are Sylvie Short, Gwen Turnbull, Beryl May, Pam Whitehead, Agness Lewis, Maureen Cordell.

Although I have lived in Norfolk since 1965 I still consider myself to be an Essex Girl, and in particular a Laindon Girl.

NB. My thanks to Beryl Collins nee May for supplying the photographs and permitting me to use them and to my sister Nina for putting them on the site for me.