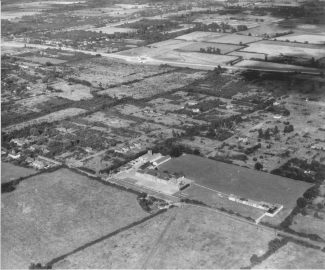 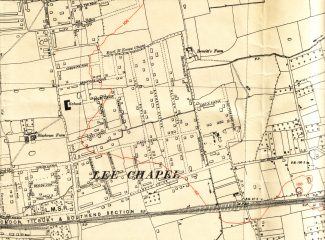 I attended Markham’s Chase School from 1951 until 1957, when the area west of the school consisted of fields and unmade roads along which were a scattering of little bungalows where one or two of my classmates lived. Although Markham’s Chase itself was a made up road, St Nicholas Lane remained unmade to the west of Church Hill. (Originally known as Church Avenue according to the 1938 map.)  This was still the case when I started work as a junior clerk typist in August 1962 at Spong & Co, one of the brand new units in Crompton Close, on the No. 2 industrial estate. The company had moved from South Tottenham just a couple of weeks earlier and some of their office equipment still hadn’t been unpacked. It was a privilege to be starting my first job in a pristine newly built unit. The company were the long established manufacturers of a famous Meat Mincer, Coffee Grinder, Corkette Cork Extractor and many other kitchen utensils. They also had their own printing department.

I walked there and back each day, in all weathers for the first couple of years, including the very deep snow of 1963. I called for a workmate each morning who lived in Boult Road and we would have to bypass the unmade part of St Nicholas Lane because of the mud and had to walk around the back of St Nicholas Church, past Laindon Hall, Laindon Park School, along Basildon Road turn right at ‘Trossachs’, and walk past its very long garden which ran about 100 yards parallel with Uppermayne. We admired that garden very much with its wonderful exotic looking trees. We then crossed Uppermayne and carried on until we reached Crompton Close.

My journey from the unmade part of King Edward Road took an hour each way, so I left out at 7:45 and arrived at work at 8:45. My friend and I joked that we thought a witch lived in Laindon Hall because there was always a ‘Harry Potter’ type broomstick leaning against the wall and a black cat sitting on the doorstep. On the way to work one morning in April 1964, we were amazed to see that the hall had completely burnt down. It had been perfectly okay when we had passed it on our way home the evening before and now all that was left was a black charred mess. We were totally shocked but I mostly remember hoping that the black cat was okay.  Shortly after that time, the road builders arrived and started to ‘make up’ St Nicholas Lane to reach Uppermayne. When it was finished, we no longer had to walk the long way around the back of the church thankfully making our journey a little shorter. Lee Chapel North was built over the course of the next few years, mainly I believe, to house the Ford workers from the tractor plant in Crane Farm Road and some families whose plotland bungalows had been compulsory purchased by the BDC.

Our office on the second floor looked out directly over Crane’s Farm Road and the field in Gloucester Park where the original Sports Pavilion was built. Also, across the road in full view of our window, stood a large elm tree, but not for much longer. One afternoon we had a terrific thunderstorm. It was directly overhead and very violent. What happened next sounded like a bomb going off. The elm tree was struck by lightening; ripped from the earth and thrown high into the sky. It happened very quickly, but it seemed like slow motion as we watched the tree fly high and then come crashing down to the ground. The force behind it was terrific and the atmosphere electric. We were very shocked, never having seen such a spectacle before. The strike also blew out the switchboard, which was on the floor below us, causing our receptionist, who had been working there at the time, to come screaming up the stairs in a shocked panic to join us. The explosion had been so loud that our ears were still ringing at least a couple of hours after. The remains of the tree were removed soon after but I believe the charred stump remained for a while.

Spong & Company provided employment for many people in the Basildon area. It had a very popular sports and social club to which I belonged and we went on many trips to shows in London, annual seaside outings to places like Margate and a Christmas social each year.

After four years with the company I wanted to gain more experience so moved on and spent the next five years working in Billericay. I met Colin in 1967 and we married in 1969.

Spong & Company was eventually sold to Salter Housewares Ltd in 1980. However, I believe the printing department broke away from the company and continued to function independently.