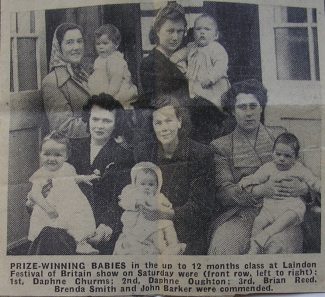 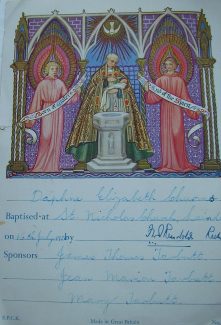 I was born in Billericay hospital on June 19th 1950, and came home to Western Villa, Buller Road Laindon, the first child of my parents Joyce and Les Churms. We lived in the bungalow in one of my previous pictures. It looks very run down in the picture, I think it must have been taken just prior to its demolition, the builder used it for storage while building a brand new house in front of it. Like most of the houses on Buller Road in the 50s it had a huge garden, lots of fruit trees, and we kept chickens, turkeys, ducks and a goat.

In May 1951 Laindon held many events to celebrate the Festival of Britain, one of which was a baby show at Laindon High Road School. I came first, and my proud mother kept all the newspaper cuttings of course. I have tried to show some of them here. It is interesting to note that the baby who came 2nd was also called Daphne (Oughton), and is mentioned elsewhere on this site.